The Deadmines is your first instance if you play on Alliance. It is a simple instance but very nicely designed, with a single path to take and some nifty rewards for that level (your first blue items). It is great to get started with group mechanics and how to handle mutiple elite mobs pulls.

Even though the Meeting stone says lvl range 17-26, I’d recommend having your group level average being 18-23.
If your whole group is composed of lvl 17s, you will probably not be able to finish the instance (clear the pirate ship, including the boss mobs), and to be honest there’s not much interest in going to the deadmines if you can’t do that. The only exception to the rule might be your main healer, who can live being lvl 17 without problems, since he just needs to heal you and doesn’t care about the NPCs being orange to him.
If you are 26… well most of the stuff will be grey to you, the point of a sucessful low level instance run is to get items AND good exp at the same time.
So ideally: lvl 18-23 is what your group must aim for. Personally I’ve done this instance with a group of 5 lvl 19s and it went smooth. We had Mage Rogue Druid Druid Paladin, not the best group composition out there but it was still more than enough. If you follow this guide carefully you won’t have any problems.

You need at least one dedicated healer. Any class with heals (Priest Druid Shaman Paladin) will do, as long as the person knows he is supposed to heal and to save his mana for this purpose, your group will be ok.
Other than that, it’s nice to have a mix of all classes. A tank (Warrior, Paladin, Druid bearform), and the rest is up to you, try to have some versatility in the group if possible.

You should know where the entrance is, since you probably did the Defias Traitor escort quest. If you didn’t, it’s your loss 🙄 . Anyway, the entrance is in a house in the village of Moonbrook, in the Southwestern area of Westfall. Loc 42,73 (if you use a UI that shows locs).

If your group doesn’t feel like doing the first 2 quests (Oh brother… and Collecting memories), then go straight to chapter 2.

When you enter the house in Moonbrook which leads you into a mine, your minimap will look like this: 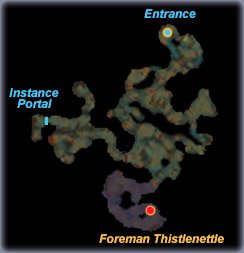 Go towards the area where “Foreman Thistlenettle” is and kill him, loot the badge off his corpse to complete the quest Oh, Brother… and keep killing the skeletons / zombies in the area until everyone has 4 Miner’s union card to complete the second quest: Collecting memories. They drop fairly often.

When you are done with these 2 quests, you can head towards the Instance Portal and zone in. 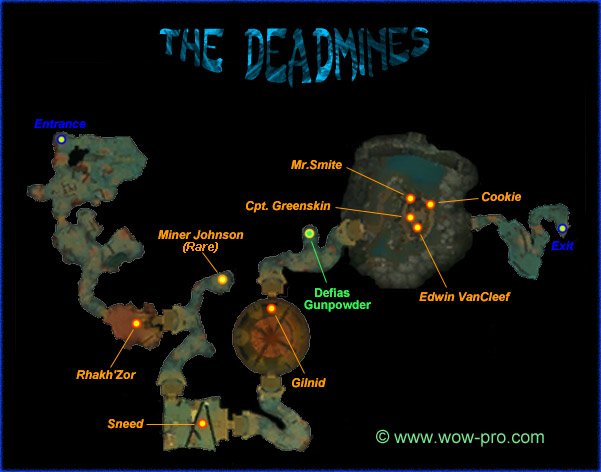 From the entrance to Rhakh’Zor, you will have to kill a bunch of miners, they aren’t elite and they die easily. There will also be a few Defias Overseer, which are elite, but not so tough. There is also one patrol, a single Defias Wizard most of the time.

The only danger here (and actually this is valid throughout the dungeon) are runners. Try to always pull mobs back to your group, don’t rush into them, so that if they run, you have room to finish them off before they bring friends. Best is to have a class with some kind of snare though. (Rogue with Crippling Poison, Shaman with Frost shock, Warrior Hamstring, etc). So try to work something out with someone in your group.

You will then meet Rhakh’Zor, your first miniboss. There’s not much to say about him, besides he can be pulled solo if you wait for him to be away from his 2 guards (2x Defias Watchman).

He hits reasonably hard but slow, has a lot of HPs, as any boss should have. This fight should be easy.

Rhakh’Zor almost always drops a non-magical 2hander, and rarely a green Axe instead. Nothing to write home about, so on to the next boss! 🙂

Note: Everytime you kill a boss, the door he was guarding opens up, and a patrol respawns and heads down towards you. After every boss fight this will happen, and the further you go down in the Deadmines, the bigger the patrols will be. So be on your guard and look behind you every now and then.

When Rhakh’Zor dies, the big door behind him opens, kill the 2 defias watchmen and go through the now opened door, you’ll see the path ahead fork off to the left and right. To the left is where Miner Johnson spawns, but only once every 5 instance runs or so. It just takes 2 minutes to check if he’s up, and he most of the time drop a blue item:

To the right are goblins and further down the big goblin, aka Sneed on a shredder.
I suggest clearing the room where Sneed roams about as much as possible before you pull sneed, you don’t want to get adds during this fight.
Sneed is slighty harder than the ogre, because you actually have to kill him twice, kinda. Destroy his shredder and then destroy him.

So he’s definitly worth killing, not like you had a choice anyway 🙄 .

Clear up to Gilnid‘s room, once there, clear his room and save him for last. Gilnid isn’t hard either, the only difference with previous bosses is that there is one goblin that always stays too close to him to be pulled solo. So you have several options: Kill the little goblin fast and then Glinid (only your tank goes on Glinid from the start). Or polymorph the goblin during the whole fight, provided you have a mage.

If you are lucky, Gilnid will drop this ring (35% chance):

Now things are about to get funnier but also more serious.

Clear up to the Defias Gunpowder as shown on the map above, have someone loot it, then clear up to the next gate. The person who looted the gunpowder will have to activate the cannon in this room, which will blow up the gate.
As the gate explodes, Mr.Smite starts shouting orders, and mobs will rush for you, deal with them. Then start clearing up on the wooden deck.

Warning: This is where things get serious, so make sure your group is sticking together and that nobody rushes toward the board going up to the ship.

Your group must be aware that as soon as you get close to that board, 2 Assassins appear and attack your group, and as soon as they do so, Mr.Smite rushes down from the ship and engages you as well.

The trick to this fight is that Mr.Smite actually doesn’t hurt that much as long as his hit points are high. So it’s best to deal with the 2 assassins while your tank keeps Mr.Smite busy. Once both Assassins are either dead or under control (polymorphed), focus on Mr.Smite. Also, try to carry the fight away from the ramp, that way everytime Mr.Smite stuns your group and goes to his chest to find a new weapon, you have some time to recover while he runs back to you.
I suggest to save up some mana/rage for the end of the fight, because he increases in damage output twice during the fight, and hits really hard when he is low on HP. So save some gaz for the last 40% of the fight.

It’s probably the hardest fight of this instance but it’s cake if you follow these instructions and your healer is on the ball.

With luck, Mr.Smith can drop the best 2H weapon you can get at this level (20% chance):

The other drops aren’t worth mentioning. 🙁
But now you got access to the Pirate ship, and the last 3 bosses!

Go up the ramp, kill a few pirates and go to the left first, you’ll find Cookie, he’s easy. Can drop a blue wand with 22.7 DPS (30% chance), and the oh so desired Siamese cat pet (15% chance). After cookie has been taken care of, go backwards and this time go right, to the other side of the ship.

Before we proceed I must warn you that on the ship there is not much room and it’s quite packed. I suggest you have your puller always pull way back to your group. Tell him to do it carefully, especially when reaching the 2nd floor of wooden boards, on the right-hand side of the ship, because Captain Greenskin roams right above it. It happened several times that my group just got too close to the top deck and aggroed Captain Greenskin and friends from the 2nd floor, which generated a nice train and a full party wipe.

So if you want to save time, let ONE puller carefully take mobs down to your group. Once the path is clear and that the only thing left on the top deck is Captain greenskin and his guards, your group can move up and engage him.

Captain Greenskin isn’t that hard himself, the problem is that he has 2 guards, but that shoudln’t be a problem for your group now that you managed Mr.Smite, you know how to deal with such encounters.

So I’m gonna assume you wiped the floor with Captain Greenskin and hope that you are lucky and get this very nice staff (35% chance):

And now there is only one mob of importance left on your kill list, Edwin VanCleef himself, your main target!

He is waiting for you in his cabin, looking all by himself, but actually as soon as you aggro him, 2 guards will spawn and attack you. There is a trick to this fight: Kill him first, don’t try to kill the guards, just polymorph them if you can.

The thing is, if you kill VanCleef‘s guards, he respawns them. If you take too long to kill VanCleef, he spawns additional guards.

One word of advice: Kill him fast. And he will be an easy fight. After vancleef is dead, deal with the guards and you are safe.

Don’t forget to loot his head, which is needed to finish the main quest of the Deadmines. Also loot an Unsent Letter, which begins a quest line for your next instance: The Stockade.

Being the big boss of the pirates, Edwin VanCleef has a large loot pool, and can drop one of the following 4 blue items: 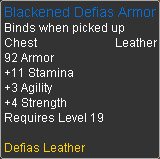 And actually the 4th blue item is so lame we’ll just act as if I forgot to link it.

If you think that was your last blue item of the day, well that’s incorrect, because now is the time to go and turn in your quests! Your group can either use hearthstone or clear the path towards the exit (see map).

The main quest offers you to choose one of the following rewards: 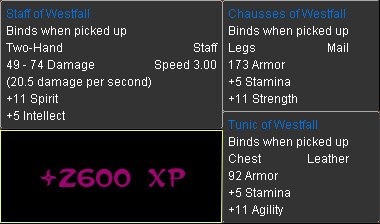 I hope you enjoyed this guide to the Deadmines!