The Stockade is available to the Alliance only. The Stockade is probably the quickest and easiest existing instance. As a counterpart, the bosses don’t drop blue loots (besides one named which doesn’t always spawn). On the other hand, you can gather most of the quests quickly and finish the whole instance under an hour, and get a great experience boost. There is also a better reason to do the Stockade: one of the quests involving it leads to something you don’t want to miss… 😉

Optimal group would in my opinion be 5 level 26-27 players. Of course this never happens, so try to aim for a mix of level 25-31, which is totally fine as well.

The instance is pretty simple so there’s no strict requirements besides having a Healer (Priest, Paladin, Druid). Having a tank class (Warrior, Paladin, Druid bearform) is nice as well.

The entrance to the Stockade is inside Stormwind city, in the canal district, west of the Trade district. 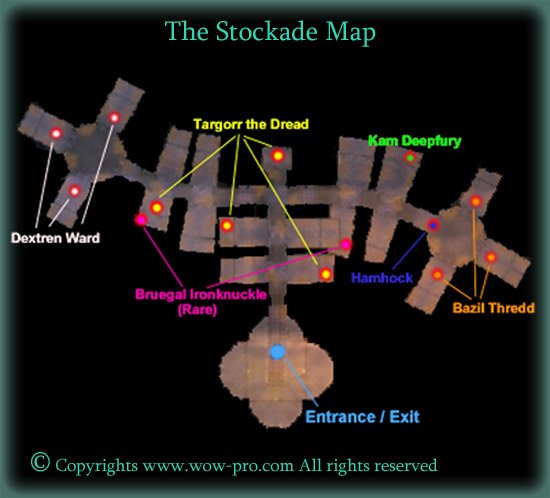 The Stockade, despite being generally the easiest instance of all, has a few difficulties, which you can easily fix if you follow these guidelines:

He will be your first miniboss encounter, he can spawn at various locations. Check the map for his possible spawn points (there might be other ones, so you should check every room).
He’s an easy boss and will most of the time be pulled solo or with one add, which you can sap/polymorph/sucubbus seduce. Don’t forget to loot his head to complete the quest [25] What comes around… (Elite).

At the end of the first hall, go downstairs to the left. Proceed to check and clear every room to the left and right, with luck you might find the rare spawn Bruegal Ironknuckle, which can drop:

Dextren Ward can be in any of the 3 rooms at the end of this hall, and I recommend you pull him way back, to the corridor you just cleared, because he is a warrior and uses Intimidating Shout (Area Fear). You don’t want your whole group to get feared into some of the side rooms and bring lots of adds while you are already fighting Dextren. So you got two options, clear the whole rooms before pulling Dextren, or pulling him way back to a safe room you already cleared. Loot his hand to complete the quest [26] Crime and punishment (elite).

You are done with this wing, so go backwards and then on the other side of the stairs. Check and clear every room to the left and right for a possible Bruegal Ironknuckle and also Kam Deepfury which should be in the second room to the left. He should come with an add, which you can sap/polymorph/seduce. He is an easy boss, shouldn’t be a problem. Loot his head to complete the quest [27] The Fury runs Deep (elite) if you have it.

Right behind the doorway at the end of this hall stands Hamhock, which will come with an add or two maybe, but nothing you can’t handle. Hamhock is just the bouncer guarding the way to Bazil Thredd, your main target in this instance.

Bazil Thredd can spawn in any of the three rooms (check map) and is the highest level npc in the zone (lvl 29 elite). Pull him very carefully, he might come with an add or two. Being a rogue NPC, Bazil deals a fair amount of damage. I suggest polymorphing Bazil or sapping him and kill the adds first, then deal with him properly. If your group has an average level of 27+ it should be very easy if you proceed carefully.
Loot Bazil Thredd’s Head and complete the main quest: [29] The Stockade Riots (elite). You can start heading out toward this exit, but you should stay in the instance and keep on killing until you finish the two other quests: [26] Quell the Uprising (elite) and [26] The Color of Blood (elite). The wool bandanas can drop off any mob inside the instance, and they respawn every 25 minutes or so, so it won’t be a problem to finish everyone’s quest.

After turning in the Stockade Riots, you will be sent around many locations in Stormwind city and accomplish about 9 mini quests, including deliveries and an assassination of two lvl 30 npcs! (Ask for help if you are too low level to take on two lvl 30 mobs at the same time). If you go through the end of this quest line, you will be rewarded with the following:

which will probably remain equiped to you for a long time. 😉
and 3750 xp!

I hope you enjoyed this guide to the Stockade!