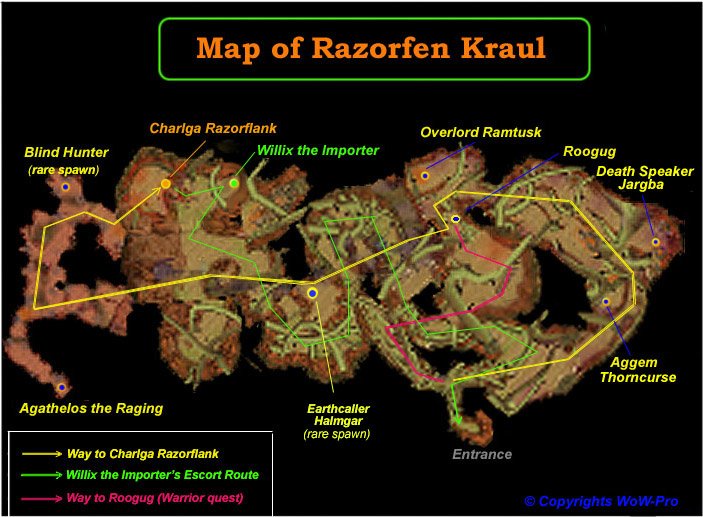 Razorfen Kraul (aka RFK), is a nice little instance, packed with mobs, and can be done in 2 hours if you know where you’re going. It’s designed for a lvl 30-32+ group. I will try to cover everything that needs to be said and to keep it short. Just the map already will be a big help, the optimal route to take is drawn on it(Follow yellow route until Chalgra Razorflank, then Green until exit), and every named listed. Now on to the guide!

Razorfen Kraul is located in the barrens, at the most southern part of it, actually at the border to the Thousand needles. When you are there, look towards the West, that’s where the entrance to RFK is, if you look East, that’s towards the entrance of Razorfen Downs (lvl 40ish instance).

Enter the instance and start following the Yellow route, to Charlga Razorflank. (you can if you wish follow the violet route and quickly kill Roogug, if any warrior in your group needs the quest done, it’s a nice warmup, then go back and take the Yellow route).
You will be in some kind of mini-canyon, keep following it until you walk out of it, then you have two choices :

> The main route is going straight infront of you, but behind you on each side of the mini-canyon you just went through, are two optional nameds: Death Speaker Jargba and Aggem Thorncurse. They mostly drop some green items. But Jargba has a small chance to drop a blue item: 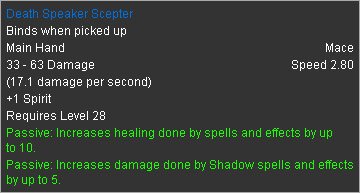 It’s all up to you if you want to kill them or not. They are easy, especially Aggem Thorncurse.

When you are done with that, go back to Following the yellow route, until you get to Overlord Ramtusk.

Unlike the previous two nameds, he is a mini-boss, and almost always drop blue loot. He is also harder to kill, hits kinda hard, and has two guards. It all depends of your group setup how you want to handle those two adds. If you have both mage and warlock, keep them Polymorphed and Succubus seduced the whole fight, while killing the named. If you don’t, I suggest letting your warrior tank the named while the rest of the group kills the add(s).

Go back to following the Yellow route, over those wooden bridges. I suggest you always let your puller pull the next platform and run them over the bridge to your group. There are a few stealthed mobs on each platforms, so it’s good to rush them until they seem clear. Fighting on bridges isn’t recommended as well, avoid it if you can.

If you follow the bridges you will reach the caverns, this is where you find those bats who drop the Kraul Guano for the Going,Going, Guano! (Horde) quest.

A bit further west into the cavern you will see an Energy Barrier blocking the way to Agathelos the Raging. Pull the pack of mobs guarding it, and then kill one by one the two mobs channeling that wall. Once dead, the wall will fade. You can then head in and kill Agathelos. Its a straight forward melee type boss. 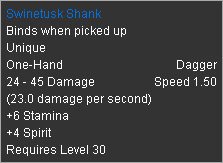 Go back to following the yellow route, before exiting the little cavern, check the Northwest corner of it, there is a rare named bat spawning there sometimes (this is decided when your group enters the instance and creates it) if its not there, don’t look any further. Then you will finally make your last few steps before you engange the big boss: Charlga Razorflank.

He’s waiting for you on top of a turret, try to get him away from it. Send your warrior to pull him from max range and then back off until Charlga gets off his turret.

He is a caster type, he casts chain-lighting (so watch your whole group’s health bars, also, Shaman’s grounding totem works nicely against it, use it), renew (which makes him regen like mad, you can counter this with Priest: Dispel or with Shaman: Purge, or Warlock’s felhunter pet), and by the end of the fight he uses Divinity, which makes him immune for about 10 seconds. He doesn’t have much hit points though, so he will go down fast if you dispel his renews or just outdamage them.

Congratulations, loot his Heart (Horde) or Medaillon (Alliance). You have finished your main quest, and the rewards are quite good. But there is still a couple of quests to do, and they are kinda on the way back anyway, so don’t miss them!

CAREFULLY jump down under Charlga’s Turret, there should be just one mob aggroing you when you jump. Make a quick deal of it, and then you should have Willix The Importer‘s tent in sight, so start pulling towards it.

Before starting the escort mission with Willy:

Blueleaf tubers: When you have the area around you cleared sufficiently, get one Snuffler out of the crates you got in ratchet, and then use the command stick. The snuffler will go and dig out the closest blueleaf out of the ground. Loot it. You need 6 of those. Be careful not to use the command stick when you are too close to mobs, because it’s likely that the snuffler will stupidly go in their direction and die. You have a few spare Snufflers, but still…
If you cannot summon a snuffler, just keep moving around and try different spots.
Note: If a group member’s snuffler digs a leaf out, everybody in the group can also loot it. This is useful if you happen to get all your snufflers killed 😛

Alliance: Get the quest from the elf
Horde: Do whatever you want with that sorry elf 😀 (pvp flagged, but who cares in instances)

Accept the quest from Willix and get ready, he will start to move towards the exit. If he dies, you fail the quest. (you can try it again though by restarting the instance and re-clearing to him)

You shouldn’t have any problem. Willix the Importer will lead the way to the exit, and reward everyone. (A ring with +6 to the stats of your choice)

Note: Now that the way between Willix’ tent and entrance has just been cleared, feel free to go back there and get the last Blueleaves you miss. It should be easy.

Alliance: You will have to kill some more quillboars if you want to finish your last quest. Feel free to reset the instance and to get a few more bosses while you work on getting this last quest item.

There you go, this is the most efficient way to do Razorfen Kraul and all of it’s quests in one run. I hope you enjoyed this guide!