Gnomeregan has been the gnomes’ capital city for generations. Recently, a hostile race of mutant troggs infested several regions of Dun Morogh – including the great gnome city. In a desperate attempt to destroy the invading troggs, High Tinker Mekkatorque ordered the emergency venting of the city’s radioactive waste tanks. Several gnomes sought shelter from the airborne pollutants as they waited for the troggs to die or flee. Unfortunately, though the troggs became irradiated from the toxic assault – their siege continued, unabated. Those gnomes who were not killed by noxious seepage were forced to flee, seeking refuge in the nearby dwarven city of Ironforge. There, High Tinker Mekkatorque set out to enlist brave souls to help his people reclaim their beloved city. It is rumored that Mekkatorque’s once-trusted advisor, Mekgineer Thermaplug, betrayed his people by allowing the invasion to happen. Now, his sanity shattered, Thermaplug remains in Gnomeregan – furthering his dark schemes and acting as the city’s new techno-overlord.

Level range:
Though meeting stone says 26-35, you won’t be able to complete the dungeon, if you’re not lvl 30 at least. This affects healers too because low lvl players can aggro a nasty amount of mobs in the latest part of the instance. 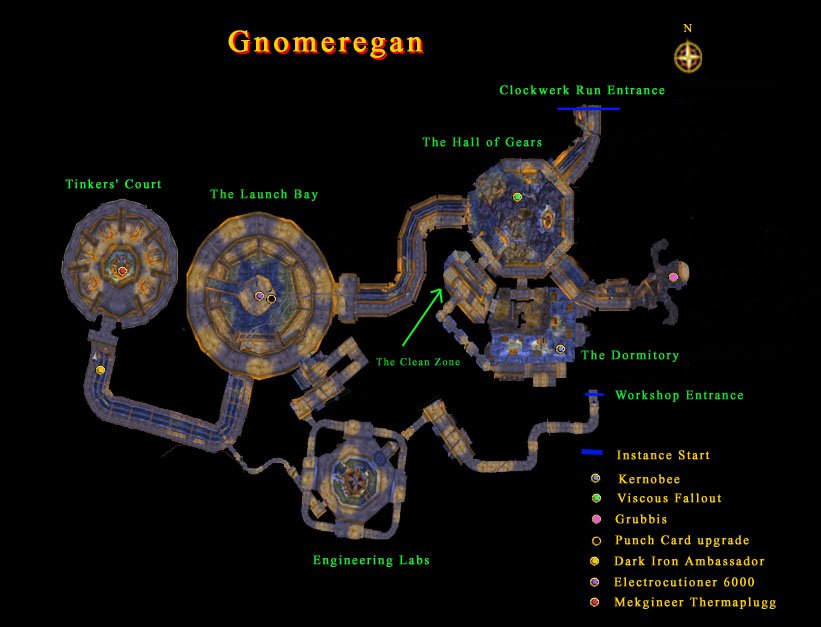 If you have been questing in Dun Morogh (usually dwarf/gnome), you should know where the entrance is. Horde gets teleport to there. Anyway, if you don’t know where it is, location is Dun Morogh (24,40).
Mobs near the entrance outside the corridor are lvl 9-10, so that’s not a problem. You probably won’t see any mobs till the elevator but there’r sometimes patrols of one or two lepper gnomes-lvl 25-26. So,you can safely go inside the corridor. You will go down and down till there’s an elevator. Usually there are around 6 lepper gnomes there, which are non-elite and easy to kill. When you go down the elevator, you’ll see a room full of gnomes (lepper ones :)). If you are alone,you’d better wait for the others because you can pull all of them. Once you’r all together, clear them and go up the corridor to the right. Some more gnomes and you’ll be at the place where elites start – lvl 25-27 troggs. If you have the quest for Techbot’s brain go forward. Follow the path and don’t jump. He’ll be in one of the rooms to the right of you. Kill him. He has no special abilities and drops nothing good-usually a shield. Loot him and get his memory core. 1 quest completed. Probably, the one, whose loot is the bot can get 1 robomechanical gut for the quest. You’ll get this quest done with no need to go to special places and so on. 🙂 Meanwhile, any mob you’ve already killed should’ve dropped a white punch card. Use it on one of the punchers to get the next card. Now, go back to the place where road separated and go to the other side. Just go on killing mobs till you reach the entrance.

Let’s get it started:

As you enter, you’ll be in a corridor. Go forward (there is no other way, actually). You have to kill only two mobs before the corridor separates in two ways – right and left. Go left and keep cleaning your way. You shouldn’t have any problems in this part. You’ll see another corridor going right in 2-3 groups time. There is an optional quest there with no difficulty (see Grubbis on the map). You just have to try not to go inside the caves, which will open (because they collapse after a certain time, killing anyone inside. Even worse, you can’t be ressed, because generally even if a resser stayed outside the cave and lived, he can’t target your body. There is a warning shouted before the cave blows). Fight the troggs outside. If you don’t want to do it continue fighting. IF there is/are hunter/Warlock in the group, he/she/they must put his/her pet to passive. Soon there’ll be a way to move to the right. There’ll be 3 troggs, which are also easy to kill.Remove them from your way and go down the stairs to the right. You’re in the clean zone.

The thing I really love in Gnomeregan is the clean zone. Why? Well, vendors and a mail box. Also, here are 3 “Spracklematics 5200”, which are for two quests – The Sparklematic 5200! and
Grime Encrusted Ring.
You can do only the first one for now, though. At the end of this zone there is the next puncher. Use it to get the third card. The corridor splits.You can go to the Dormitory and search for Kernobee in order to do the escort quest or take the left one and continue your way. Turn right when there is place to move and you’re in the Hall of Gears.

The Hall of Gears

The hall of gears is a round hall with elementals and oozes.You can take the samples for the quests here. Also, there is a boss here called Viscious Fallout. The fight with him is really simple but some good drops here:

You can clear all the mobs for loot here but it’s not needed. You can continue your way through a passage way. Go in that corridor on the left side, which is a bit upper than the right one. Stick to the left!!! This is where the “fun” begins. There’ll be two types of mobs – mounted leppers and unmounted leppers.First kill the mounted one, with having someone beside the MT tanking the other like – paladin/rogue/shaman/pet can do it. On your way you’ll see some wardrobe like boxes, which can be opened. This way you can colect the essential artifacts. Look out for alarms, they’re killed easily but if not they get around 30-40 elites after you, so just kill them :). At the end of the corridor, you’ll see the beginning of a huge area, called the Launch Bay.

After you get out of the corridor, you’ll see big machines and lepper gnomes. To clear them get your MT to attack the machine and your mage/Warlock AoE the non-elite gnomes. They’re not hard. You can go both left and right, no difference.The point of this room is to get to Electrocutioner 6k. This boss looks like the machines and his special attack is a chain lightening, which doesn’t hurt a lot, though. He drops the workshop key, needed to open the workshop entrance, which is nearly directly to the deeprun tram part. Also drops:

and 0.0% to drop a 12 slot bag but hope never ends. :)))
Behind him is the next puncher.
As you get down the ramp, where he is, go left. Start clearing the mobs, if you haven’t till you reach a passage way. Enter it and you’ll finally reach the deeprun tram part.

First, I wanna say that that’s name because it looks like the deeprun tram. :). There are 3 ways to go – right, left and middle. The best way (for me) to go is right. Shortest way but a lot of dwarves. The way to kill them is warrior tanks all and mage/Warlock/both aoe. They come in groups of 3-4 but are really easy with two mages = two blizzards ^^. The bad thing is when they drop bombs, which have big aoe. At least one of them should drop a grime-encrusted ring. Also, a new mob type you’ll find here are the arcane nulifiers. The bad thing happens when they get into reflecting shape, which also affects their “allies”. At the end of the corridor there is a group of 2 dwarves and 2 nulifiers. Also,a “Dark Iron Ambassador” is a rare spawn at the end of the middle path. He can drop a nice gun:

and leather bracers which give 5 arcane resistance and random stats.
You’ll see a big door. Open it and you’ll be oposing a group of mounted leppers, 2-3 non-elite leppers and a machine. Clear them and only the mekgineer will be left. (and a card 🙂 )

That is the big boss. He is a lvl 35 mechanical mob. His special ability is to drop bombes, which if not killed explode for some nice dmg. Get a pet/rogue/mage/Warlock to take care of them (this can be done by running around the room and pressing the big buttons.), while the others are nuking the boss.

Also, his other special ability is a knock-back, which I think is also a partial agro wipe. In any case, with my Prot-specced pally, I found it really hard to regain agro after he punted me. Warriors can taunt to regain agro, but I’ve seen Warriors lose agro here too permanently after being punted. I don’t know what the best way of dealing with this is. We tried having two tanks, but after he punted one, he didn’t turn to the other tank, but went after some DPS. Just burn him down quickly after this I guess.

He is a bit tough fight but has nice drops:

some rings which give 5 arcane and nature resistance + random stats
and has 0.4% to make an engineer happy with
Schematic:Craftman’s Monocle.

In his loot pool there are also a lot of greens.

When you kill him, go back till you see another passageway on the right side. Follow it (there are 1-2 patrols in it) till you reach the engineering labs. Here is the last puncher with which you can get the prismatic card. Grats, you completed the Gnomeregan instance.

P.S. Hope you like it, it’s my first guide. I decided to write it as I know a lot about GR and there was a request for it. :))