The Sunken Temple is located in the Swamp of Sorrows, it is an instance designed for a 5-man party. It is definitly a place worth visiting when you are in the lvl 51-55 range, it is a really fun instance and the rewards are very good for this level. Make sure to check out the class quests at the bottom of the page (https://www.wow-pro.com/node/803).

The quests marked in Orange are the ones you must have BEFORE you enter the Instance for the first time. The rest are follow ups or quests you get inside the instance.

The entrance to the Temple of Atal’Hakkar is located in Swamp of Sorrows, in the southeast part of it. To reach the instance portal, follow the directions on the map below: 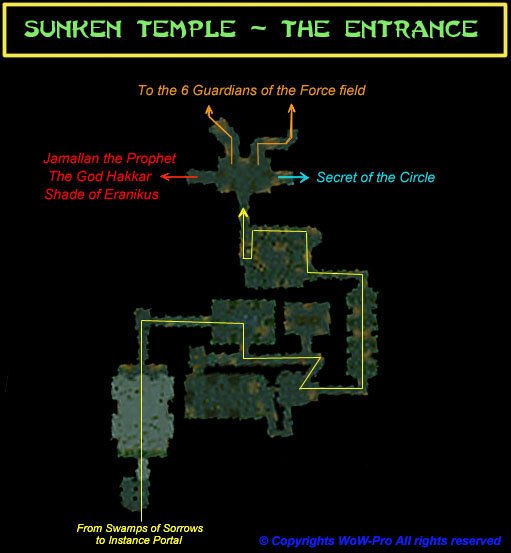 1. Secret of the Circle:

After entering the instance, go right. Go down the spiral stairs, then you will have a few pulls to deal with, and you will reach the Altar. Complete the quest [51] Into the Depths , you will get the follow up [51] Secret of the Circle. If you activate the altar, a serie of green lights will appear at different spots in the room, you have to memorize the order in which the lights appear, and reproduce it later on by activating statues on the upper floor of this room. If you have troubles with this part, check the following map, the order in which the Statues must be activated is shown: 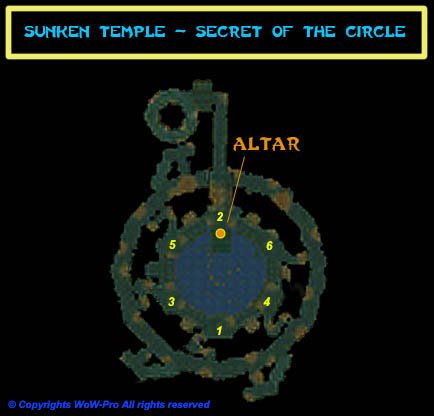 Before activating the statues, you must first clear the pool down the stairs past the Altar. A boss mob will spawn there after you sucessfully click all the statues, so clear the pool.
At this point, you are probably wondering how the hell do you access those statues. 🙄 Go back up the spiral stairs, and take the next path to the right (marked as ”to the 6 guardians” on the first map). You will soon reach a room with 2 sets of stairs. One going up, the other going down. Go down! You will reach the Hall of Serpents. Clear your way through this Hall, and activate the Atal`ai statues one by one, in the order described in the above map. 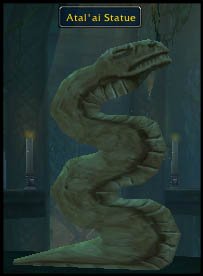 After clicking a statue, a green light should appear. Once you have activated all 6 statues in the right order, an Idol will appear in the Pool, and also a mini-boss guarding it. Jump down at the Altar and prepare for the fight. The boss is pretty easy and straight forward.

After defeating it, you will have access to the Idol, go click it and you will be rewarded with 3 good items. Go back up to the entrance and take the way ”To the 6 Guardians of the force field”. This time, take the stairs going UP.

2. The 6 guardians of the force field:

This area is kinda similar as the Hall of Serpents. You have to clear your way through a circle corridor, and the 6 guardians can be found in the side rooms. The pulls will be a mix of Humanoids and Undeads, so use Shackle Undead, Polymorph and Sap if you have that. Sometimes you will have to go down a flight of stairs to reach the named’s rooms. You can kill them in any order you like.
You can see them marked as green stars in the map below: 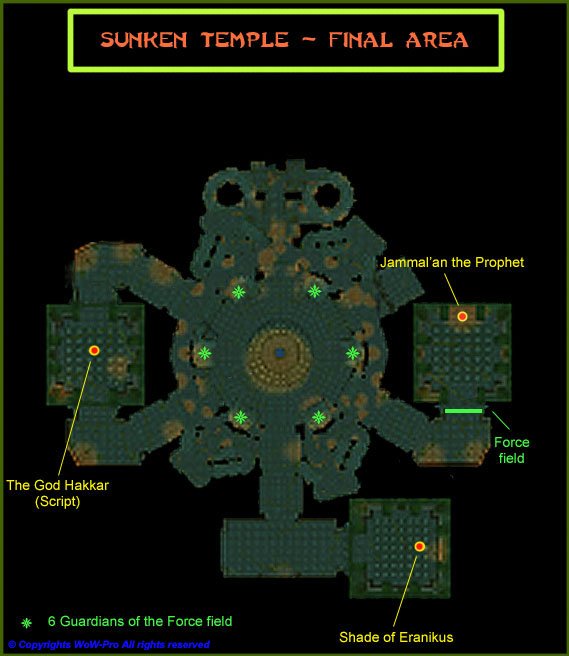 They are all quite easy to defeat but pay attention, some of them have annoying abilities. One of them especially, casts a totem, that spawns Skeletons every 2 seconds or so. Destroy that totem fast or you will end up swarmed. Besides this, they are really easy. Their names are: Zolo, Mijan, Hukku, Loro, Zul`Lor and Gasher. They mostly drop nothing, but very rarely drop green or blue items (5% chance) of low quality. So why kill them? You have to, for the simple reason that if you don’t kill the 6 of them, there will be a force field preventing you from reaching Jammal`an the Prophet. Take also note that the Shade of Eranikus isn’t targetable as long as Jammal`an is alive. So that’s two very good reasons to kill them, no matter how worthless they are.
Once the 6 guardians are dead, the force field will vanish. Go back to the entrance, and take the leftmost way, marked as ”To Jammal`an the Prophet… etc”.

At the end of the stairs, you will find dragonkins. Pulls will consist mostly of 1 or 2 Elite dragonkins and a bunch of non-elite whelps. If you have a mage with instant arcane explosion, AE them. If you don’t, assist one person and kill them one by one. Have the warrior spam Demorilizing shout a few times and try to keep aggro on most dragons. Thorns or Imp pet fire shield helps a lot.

Note: Druids, don’t even bother casting Hibernate on those dragons; for some obscure reasons, they got extremely high resistance to it. It’s not worth it. (unless they changed resist rates on those since last time I went, which was a long time ago)

After a couple of pulls you will reach a large circle room, full of dragonkins. Look on the map above for Jammal`an the prophet and start clearing your way towards his chamber.

Once you reach his chamber, and before you start pulling, there are a few things you should know:

Once the room is clear, you will be left with two mobs: Jammal`an the Prophet and his buddy, Ogom the Wretched. Ogom is just an annoyance, have someone offtank it (a shaman, a paladin or a bearform druid, or even a warlock pet). The real threat is Jammal`an, who is a caster and hurts a lot, also, jammalan casts a curse which charms the target and makes him attack his group members. You cannot dispell this curse.

So basically, kill Jammal`an first and kill him fast, and be ready for a difficult fight.

Jammal`an can drop very good cloth pants, decent cloth vest, or crappy cloth gloves. Each have about 30% chance to drop, so pray you don’t get the gloves at least 🙄

Also, don’t forget to loot his head, and you will complete the quest [53] Jammal`an the Prophet.

Killing Jammal`an triggers the spawn of two Dragons: Dreamscythe and Weaver. You will find them flying around in the big circle room. You can pull them one by one. They are rather easy and have a 30% chance to drop really good blue items.

Clear your way through the dragonkins, and go to the room marked as ‘The God Hakkar’ on the map. You will enter a room with a summoning circle in the middle. Before you do anything, explain your group what is this script about:

Also the avatar can drop quite good items, 6 different blue items, such as:

Now on to your last epic battle, the Shade of Eranikus!

Eranikus has the best loot table in the zone, and he is also the hardest mob to defeat in the zone. Don’t bother if the average level of your group isn’t around lvl 53, because Eranikus is himself lvl 55. So anyone below lvl 53 will see him Orange, and it will be hard for anyone in this case to deal sufficient damage to him. This doesn’t apply to the healer of your group though, who can heal just fine no matter what level Eranikus is.

Anyway, there are a few tricks to this fight that I will reveal, so even if you feel your group is a bit low level, you can go and try.

First of all, you must kill EVERY single Dragonkin in the whole area. They come to the aid of Eranikus when you engage him.

Once you have the whole circle room and the corridors cleared, go toward the chamber of Eranikus, on the way you will find two other dragons: Hazzas and Morphaz. They share the same loot table as Dreamscythe and Weaver, and are about as hard. The only difference is that you have to fight those two at the same time, so this isn’t an easy fight. But if you managed Jammal`an and the Script of Hakkar, you should be fine.

After those two last dragons bite the dust, you will be left with only one challenge to accomplish: defeat the Shade of Eranikus. 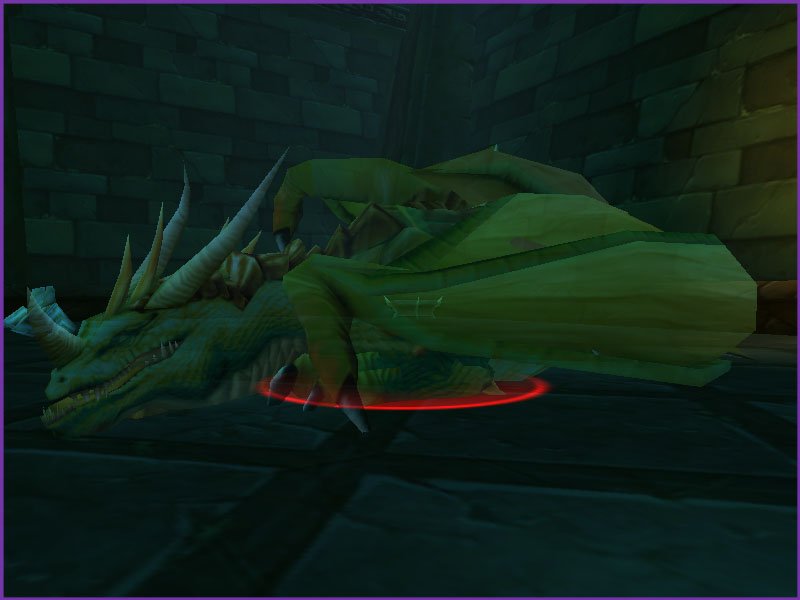 To counter this, you need to have another person meleeing Eranikus (ideally a rogue, if not, a paladin, shaman, or even a druid in cat form), preferably someone you can afford being put to sleep for 20 seconds (basically anyone beside your tank and your healer).
So as soon as your tank engages Eranikus, have that other person go with him and melee and build some aggro. The ideal would be that this person has high aggro on Eranikus, but doesn’t overaggro your tank, or it could get uggly. And if you do this right, Eranikus will pick that person as target for Deep Slumber, and that way your tank will always be taking the hits.

Note: It happens quite often that he sleeps your tank the first time he does it. A shaman, a paladin, or a rogue with evasion up can pull the aggro and survive Eranikus until your tank awakes and Taunts. Give your tank a few seconds to rebuild aggro before you start nuking Eranikus again, and let him pull it away from camp.
Normally if you did it right, he will not Deep Slumber your tank again, and will pick the other person meleeing him.

Once you have the Deep Slumber under control, the fight is pretty stable, but still mana intensive, because he hits hard. If you die it’s not an issue, you can quickly run back to the temple, take the leftmost path, and be back to his lair in 5 min for another attempt.

He is worth the trouble, drops at least 1-2 blue items, here are some of them:

Also, you will find Essence of Eranikus on the corpse. Loot it and click it to start the quest. To finish the quest, just go to the brazier in the left corner of the room, and you will get experience and a trinket as reward. (keep this trinket in bank if you don’t use it, because it’s currently part of a greater chain of quest, but not completed yet)

This was all you needed to know about the Temple of Atal`Hakkar instance, and I hope you enjoyed this guide. If I forgot anything, if you want me to add something, or if you find any mistakes please say it 🙂