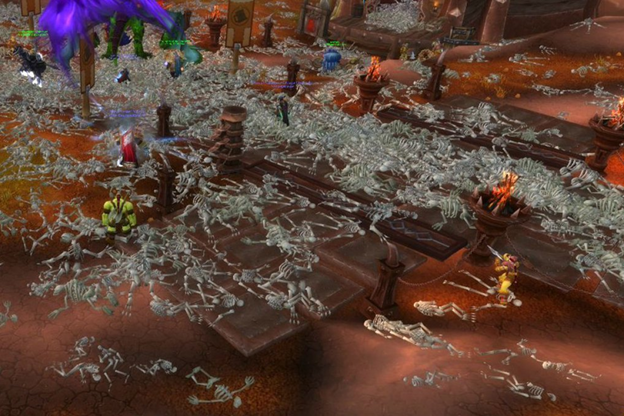 World of Warcraft has been running for 16 years, and there’s been so many unforgettable experiences for veteran players. If we could turn back time, what are some of the best WoW moments through the game’s history we would love to revisit?

In this article, let’s do exactly that, and remember 5 of the best moments from World of Warcraft history.

Take a pandemic virus that can kill a good majority of the population, accidentally release it in an MMORPG environment, and what do you get? Possibly one of the most memorable events in World of Warcraft history.

It all started with a new raid dungeon added to the game in 2005. The dungeon’s boss could cast a life-draining debuff spell “Corrupted Blood” on players, which was intended to only last a few seconds. The debuff could spread to other players nearby, and could kill low-level players in mere seconds.

Due to buggy mechanics, the debuff was able to infect player’s pets and minions, then be brought back into populated game areas. Pandemonium ensued as players, accidentally and on purpose, brought the Corrupted Blood plague back to cities, infecting an estimated 4 million players over the course of a week.

Players pretty much abandoned the cities, turning them into ghost towns, and Blizzard had to patch the Corrupted Blood spell and reset the game servers to get the pandemic under control.

It’s too bad real life 2020 doesn’t have a patch and reset button, eh?

While never officially sanctioned by Blizzard, and in fact a bannable offense if casino games are advertised in-game, players over the years have won or lost fortunes in WoW’s player-ran “casino game”.

World of Warcraft has a dice roll command (/roll) that allows players to simulate rolling dice (it’s actually an RNG with numbers between 1 – 100). This was intended for players to “roll” against each other for the right to loot chests, but players turned it into something else entirely.

Players wrote guides, developed UI add-ons, and wrote scripts all for the express purpose of running their own virtual casino in WoW, using basic high-low gameplay like you’d find in dice games on websites like Casumo casino.

Initially Blizzard let it go on, but after many players started being scammed, they expressly forbid casino games in the ToS. Or rather, they forbid advertising your casino game on public chats. Doing it privately with your guildies was still technically allowed.

Why is this one of the best moments from WoW history? Well it’s an incredible example of players taking a rather simple mechanic, and turning it into a phenomena.

Who could ever forget the battle cry of one Leeroy Jenkins, shouting his own name heroically as he charges headlong into a swarm of baddies after returning from AFK, wiping his entire raid party?

The video went absolutely viral in 2005, and people who hadn’t ever played WoW were suddenly hearing “Leeeroooooyyy Jeeeenkiiins!” shouted in popular culture, and even appearing as part of a clue on Jeopardy!.

In 2017, the player behind Leeroy Jenkins finally admitted the whole thing was staged, and it was a parody of guilds that fastidiously and militantly plan dungeon strategies.

However, they’ll never capture the memorable experience of venturing into Molten Core for the very first time back in the old days, the first 40-man raid dungeon ever released in WoW.

You have to understand that our computers and internet connections in 2005 could barely keep up with everything happening on the screen, with 40 people in the same raid party at once.

It was, in most cases, a very laggy, frustrating experience that took hours or even days to complete for many guilds. Like, people lost sleep and friendships and marriages were destroyed because of Molten Core.

But if we could go back and recapture that feeling all over again, we probably would.

WoW was always a PvP game, but it didn’t always have PvP battlegrounds. So where did the Horde and Alliance meet up to kill each other in the olden days? In the Hillsbrad Foothills, of course.

The Hillsbrad Foothills, as many of you know, is a mid-level zone for players around level 25. The Horde town Tarren Mill occupies one side, and the Alliance town South Shore on the other.

It was not uncommon at all to be following the road through Hillsbrad Foothills, and see armies of players charging each other on the fields. This is actually one unforgettable experience that WoW Classic has managed to capture.

What was your favorite World of Warcraft moment? Let me know in the comments section 😉