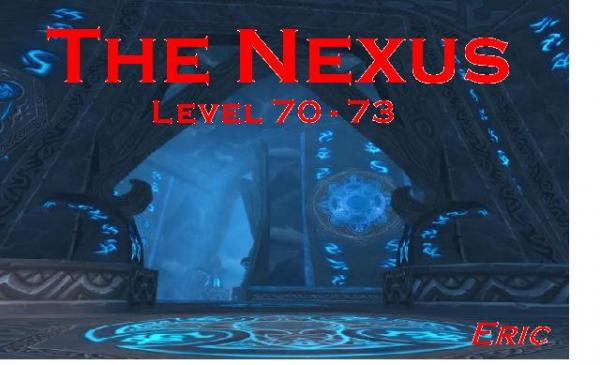 The Nexus is a 5-man instance located in Borean tundra (coldarra) in northrend. To get to Coldarra you will need to complete the quests in Amber ledge, if you start leveling in level 70 in borean tundra you will get to coldarra in the end of level 70 or level 71. There is alot of good quest in Coldarra. The Nexus will be one of the first instances you will meet in the new Northrend. The Nexus is very useful of the large amount of exp. and quest reward. When you have done the instance and complete the quests listen below, you will get around 5 superier item and alot of exp.

QUESTS
if you have completed all quests in Coldarra, skip this part

All these quests can be soloed in Coldarra And you will automatic get them if you quest through Coldarra.

Okay, now to the instance! 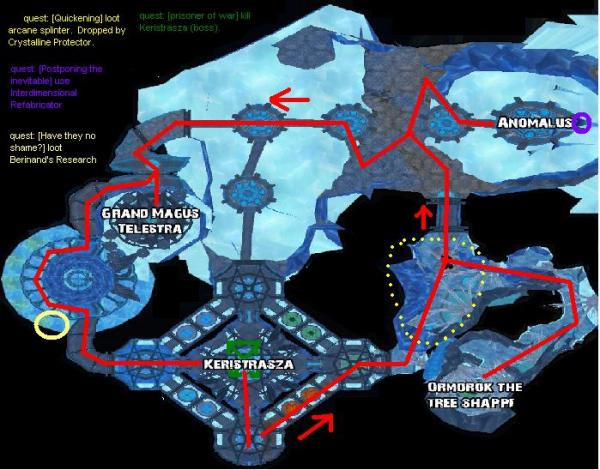 PART 1
Follow the red line at the map, until you reach the area marked with yellow. Grind you way right. Remember to loot the Crystalline Protector, Keeper, Tangler, Tender and Frayers. They will drop Arcane Splinter to [Quickening].

Keep following the red line and remember to turn right into Ormorok the tree-shaper (boss).
When you reach the boss buff up and be ready. 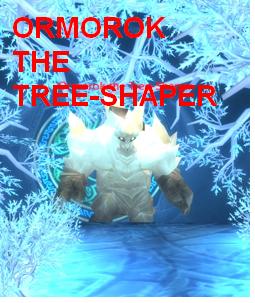 Strategy
The most important with this boss is to kill the Chaotic Rifts when he spawn them. When this happens, the tank will need to keep tanking Anomalus and the healer keep healing the tank. The DPS’ will have to kill the Chaotic Rift three man (its pretty easy because of the low Hp). Anomalus not hit very hard so he is okay easy to tank.
He will drop one of these rewards:

When you have done the boss go to the edge of the platform and right click on Interdimensional Refabricator. You should now have completed [Postponing the inevitable].

Now follow the red line back again and take the line to left. Grind you way until you have pased The rift and are inside at the palace again.

Fight you way down to the boss. NOTE: Kill the patrol that patrols at the passage.
When you have killed tha patrol and cleared the passage buff up and get ready for boss. 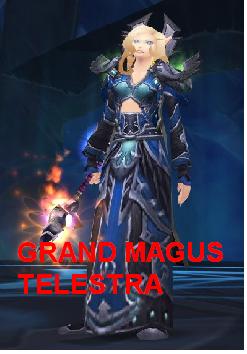 Strategy:
I dont use any strategy here, if you got any just leave a comment. This boss can be a little hard so its important to kill her fast. Sometimes she will cast Firebomb. You will be throwed to the air and back again a few times. Its not hit pretty much (around 100 damage per “jump”) but it confuse a bit. Grand Magus Telestras Hp goes down fast if the DPS’ got the recommended gear. She will drop one of these:

he strategy for Grand Magus Telestra is depending on your group setup. I usualy just have the tank tanking her were she stands and dps nuking her at start. When she split either you Crowd Control or nuke the frost one first (The blizzard hurts and healer will get out of mana quickly) then the fire one and last arcane. If your healer at this point is running low on mana. Don’t kill last add just keep the arcane part tanked / CCd and let healer regain enough mana to make it through the fight.
this is just one of the endless stream of tactics for her and I don’t say this is the best just that it never failed me before.
– Andre

Strategy: Just kill the other mobs around him, and kill the boss last.
he will drop one of these:
Emblem of Heroism
Cleric’s Linen Shoes
Grips of Sculptured Icicles
Opposed Stasis Leggings
Cloak of the Enemy

When you have cleared the area remember to lot this: 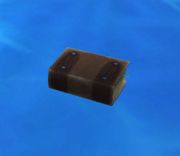 for quest [Have They No Shame?]

PART 5
Follow the red line to the last boss. You will only have to fight a few mobs. 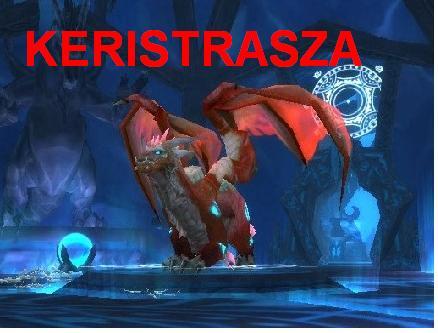 Strategy:
Well, this boss is more different than the ther bosses. The boss is frozen in ice and you can realese it if you press at one of the orbs. The tank will need to jump all the time and maybe the melee DPS’ too. Intense cold start to deal 100-200 damage, but if you dont move (jump) that can easy get up and reach 9000-10000 damage. Its a hard boss and if you dont got the req. here you will wipe.
When you have killed the boss, the boss will drop one of these:
Band of Glittering Permafrost
Glacier Sharpened Vileblade
Attuned Crystalline Boots

[Prisoner of War]you will automatic get this quest completed when you killed the boss.

Hope you enjoy my guide