When starting a group for EoE the most important thing to take into account is that members have over 18k hp with raid buff. We will come to why, later. 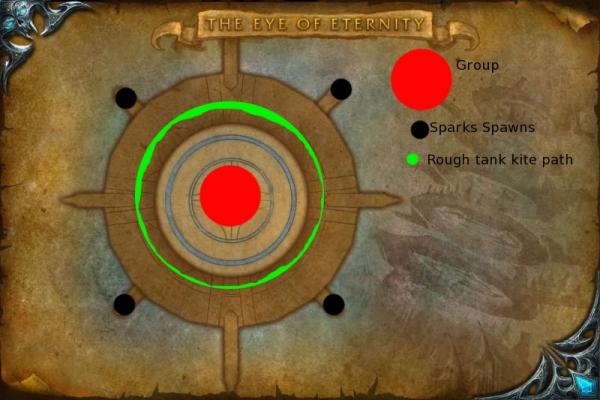 Phase 1 begins when the tank clicks the big orb in the middle of the room.
– Tanks should pull Malygos facing away from the raid group, as Malygos does a ‘cone effect’ arcane breath. Don’t worry though, Malygos’s tail is completely useless and does not swipe unlike other dragons allowing you to freely kite Malygos around the room without fear of tail swipes.

Malygos has an ability called ‘Vortex’. He will fly off the ground and spin the whole raid group around in a circle dealing 2000 damage a second for 10 seconds. While in the vortex you can use instant cast abilities and can still attack malygos. After the 10 seconds he will drop you giving you 10% fall damage.. This is why everyone need 18k+ hp

Malygos will also summon power sparks at on of 4 locations around the room. At regular intervals (including 1 before vortex) a spark will emerge from on of these ‘glowing stars’. If these reach malygos they will give him a massive damage boost. All the raid apart from the tank should huddle in the middle of the platform. The tank should then ‘kite’ malygos around the platform ensuring that malygos does not face the raid at any time, so the group in the middle is between Malygos and the spark. 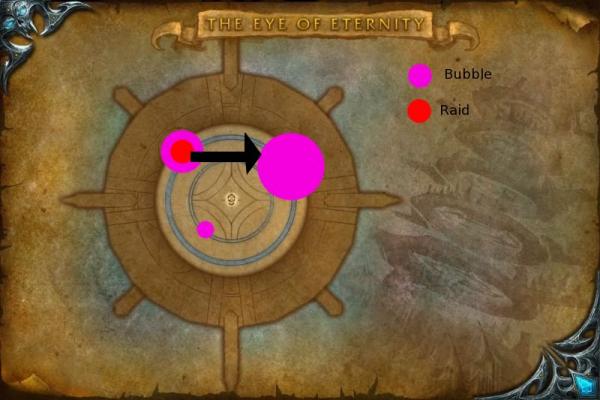 Malygos takes of into the air and spawns a purple bubble similar to that of a deathknights. The whole raid must run from bubble to bubble.
There are two types of adds in this phase ‘Lords’ and ‘Scions’

Nexus Lord: They will fly down to the raid and need to be tanked normally. When they are dead they drop their discs allowing melee dps to get on them and fly about. These can be used to kill…
Scion of Eternity: These fly in the air. They are out of range of melee and can be dps’ed down by ranged dps. The melee dps that get on discs should also help kill them. These also drop discs

Phase 3
Phase 3 begins when all the scions and lords are dead. Malygos will shatter the platform you are standing on and everyone will fall. Dont worry though, cos 3 nice drakes are waiting for you.
The dragons have 6 abilities:

Finishing move which launches a blast of flame igniting target for 1500 fire damage every 3 seconds. The effect can stack and will last longer per combo point up to 22 seconds. Costs 50 energy.

A HoT that lasts for 10 seconds healing 500 per second and awarding 1 combo point at the cost of 10 energy. This can stack up to 5 times. Each drake has its own stack, so if two drakes are stacking this ability on a single drake, that drake will have two separate stacks.

Finishing move to protect your drake. Shield surrounds you reducing all damage taken by 80% and lasting up to 6 seconds for max combo points. Costs 25 energy with a 30-second cooldown.

Increases your drake’s flight speed by 500% for 8 seconds. Costs 0 energy with a 30-second cooldown.

All players should have aleast 1 combo pointup at anytime to allow the use flame shield. When malygos fixes her/his eyes on you, you need to pop 5 or you will die. And I think this also hits people around you

This fight is quite an easy one if people know what there doing. If not, this fight can be troublesome, especially with the sparks and the drakes at the end. All in all this is a very fun fight and should be enjoyed.