Halls of Reflection is the grand finale of the three instances set in the Icecrown Citadel stronghold, and it’s a real tough cookie. Here is a lay of the land, and some tips that might make life happier when reflecting upon this run.

This instance is no push over, and even us Kingslayer folks have been known to get it wrong in here. The run is a gear-check for DPS, and will have tanks and healers working their tails off. Party members who run this heroic will want to be in an average gear set of I213 items, and be reasonably skilled.

The instance is a two part dungeon with a Black Morass/Violet Hold feel to the first half, and a brand new style of “Get the heck outta there!” style action, which I haven’t felt in a game since playing Super Metroid.

The good news is, that it is a reasonably short and very linear dungeon, as will this guide be the same.

The Fall of Falric and Marwyn

Simply turn in the quest at the start of the dungeon when everyone is ready, and get the continuation. When the event starts, head into Frostmourne’s room and head into the alcove to the left. The tank should be the only person to have line of sight with Frostmourne. DPS are highly recommended to make the tank their focus, with Target’s target activated, this will give you a real time view of where your tank’s attention lies.

The Waves
Farlic and Marwyn are waves 5 and 10 (respectively) of a time and skill paced encounter. Because you are up against the clock, it is easy to get a rush on and out threat the tank, but ultimately it is most important to stay alive. Your healer will be busy, and will likely be interrupted and taking damage, so do as little as possible to take direct damage from mobs as DPS.

Waves 1-4 and 6-9 get increasingly more challenging as they progress. If you are a Pally (including healers), or have AoE stuns (Warlock’s Shadow Fury for example) be sure to use them once the tank has agro often as you can, particularly in wave 4 and 9

Mobs in Order of Kill Priority

This mob has 132,300hp and is by far the most lethal. He can stun, fear, cause modest damage and worst of all heal. Top of the list for the kill order.

This is 132,300hp of Rogue you don’t want to meet in a dark alley, or a light one for that matter. He has the potential to stack a ton of damage on anyone he chooses, and also stun (look away now healers). It is not uncommon for the cleansing of the Deadly Poision effect to grab this mob’s attention and he’ll Shadowstep > Kidney Shot your healer. After the priest of the group is gone, Kill this guy fast.

The last of the mobs with a stun, it is wise to get rid of this guy next. 132,300hp, much like his friends, but his Cursed Arrow really can hurt someone, particularly when paired with the Mage/Hallucination combo.

The Mage is a real damage dealer, and a pain when she summons a Hallucination, however causes a lesser threat than the mobs higher on the kill order. She also has 132,300hp.

Abilities:
Shield Bash
Spectral Strike
Tortured Enrage
These guys are nasty, but should easily be able to be held for a long time with a confident tank. At 132,300hp they are resonably easy to kill, but your tank may like having these melee swings on him/her for the rage generation or mana recuperation.

A carbon copy of the Mage, minus the ability to duplicate themselves. These mobs will die by themselves after 30 seconds, and usually cast upon the tank from within the main room.

Now onto the Boss Fights.

This fight is a very simple tank and spank fight. There is no real stratergy involved, just staying alive. The healer will likely have the hardest time in the fight out of anyone. Defiling Horror is a Horrify effect, so fear nullifying measures such as Tremor totems are futile. Because of the frequent nature of spell interrupts and considerable group damage, AOE heals, HOTS, and Absorbs will compliment direct heals greatly. The boss can be disarmed.

As long as the healer is on their game, and the DPS is where it needs to be in terms of output, the 633,606hp should just melt away.

As a footnote, Party Boss Mods (Deadly Boss Mods, Bigwigs) can really assist a healer in timing his or her heals in with the boss’ special casts.

“This Pear, So Delicious”

Like Falric, Marwyn is a very simple tank and spank fight, if not a little easier than the first boss. He does have considerably more health (903,227hp) to chip away, but without any timers to beat there is little pressure on. Again there is no real strategy to employ here, just good raid awareness. Corrupted Flesh reduces the maximum hit points of your party, so you cant heal the loss of damage, however and damage taken in this state will seem very spikey for the healer in tow. Shared Suffering is a DoT debuff that can and should be dispelled, it will simply water itself down across the party, instead of take a lump off the person afflicted. And finally, Well of Corruption is a Voidzone, and remember: Spoiler > Voidzones don’t give buffs < Spoiler (Drag select between > < to reveal the spoiler) So get out of them ASAP.

When you have defeated Marwyn you will finally have a moment to rest and regenerate. One mob stands between you and the final encounter.

Abilities:
Throw Shield
The DPS and healers should wait near Frostmourne’s pedestal with the tank runs towards the mob and engages. As shown on the map above, the tank should kite the mob into the main room where you just beat Marwyn; then you can tank and spank his 400,000hp+ down. The reason you do it like this is because if you all go in as a group there will be 5 spiritual replicas of the party jump down and join in. However, doing the kite method the replicas will just stay up in the rafters of the General’s room and not attack you, even when you pass by them later.

When you finish the next encounter you will be able to turn in the above quest ender to your faction’s hero character. 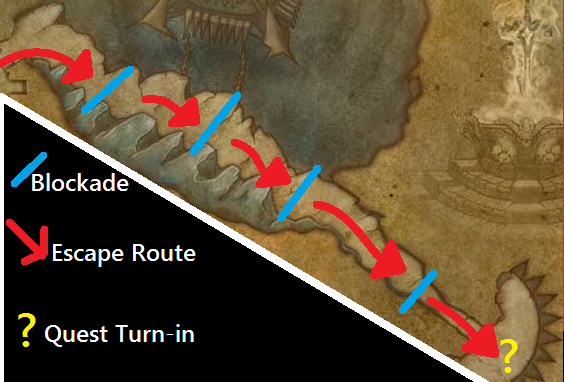 Acievement – We’re Not Retreating, We’re Advancing in a Different Direction

The above achievement requires no special strategy; your group will either get it or they wont, depending largely on the efficiency of your DPS players.

Each of the 4 sections of this encounter will start off with a gaggle of Raging Ghouls. They are fairly straight forward melee mobs that can easily have their 19,000hp non-elite tails handed to them with some decent AOE. If they are still up when the elite mobs arrive switch off of them and attack the elite mobs as they will likely die to incidental AOE damage.

These mobs cause the most group-wide damage, so kill these as a priority once they have been picked up by your tank. At 94,500 hp, they are a fairly easy kill.

These guys are standard abomination material, they cleave and spray slime, so let your tank pick them up, get some aggro, and turn them away from the group. With 189,000hp they take a little more damage to kill, kill these once there are no Witch Doctors on your tank. Once all the elites are killed, AOE or kill any Ghouls, if there are any left to kill.

Each blockade will throw a larger amount of mobs at you than the previous one, so when you get to the 4th and final wave, the groups dps needs to be maximized and focused. If your group is slower on the DPS and you have a Shaman there is no shame in using Bloodlust/Heroism on the 4th wave.

As a final note, don’t try and outrun your faction’s hero, as you can seriously inhibit your success. Just say behind her and take it as it comes. Also, Resurrecting and returning to the dungeon if you die in the waves often resets the event. This is one occasion you want to break the rules and wait for a rez (unless you wipe)

Should you die…
Should at any point you need to runback to the dungeon, I found this short video explaining how to resume your dungeon in a timely manner

In closing I would like to thank Eric, whose instance guides provided me with the the template I adapted into this guide.