This guide is based on a play through of the Human starting zone in the Cataclysm Beta. There may be minor differences by the time Cataclysm goes live. I will correct these as soon as possible. 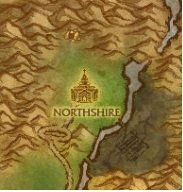 1. Get the quest [1] A Threat Within from Deputy Willem

2. Speak to Marshal McBride on the steps of the Abbey to turn in. Get the follow up quest [2] Kobold Camp Cleanup

3. Go back to Deputy Willem and get the quest [2] Eagan Peltskinner

4. Eagan Pelskinner is located on the west side of the Abbey. Turn in your quest and accept [2] Wolves Across the Border

5. Kill 8 Diseased Young Wolves in the surrounding area, making sure to loot the Diseased Wolf Pelts, until you complete the quest

6. Kill 8 Kobold Vermin in the area just north of the wolves.

7. Turn in [2] Wolves Across the Border at Eagan Peltskinner

9. Get the quest [4] Blackrock Invasion from Deputy Willem.

10. Get the quest [4] Extinguishing Hope from Milly Osworth, right next to Deputy Willem.

12. Head back across the river, and north to the kobold area.

13. Kill 8 Kobald Workers for [3] Investigate Echo Ridge. The workers are slightly larger than the kobolds you killed before, and are wearing a blue shirt.

14. Turn in [3] Investigate Echo Ridge at Marshal McBride. Accept the follow up [5] Skirmish at Echo Ridge.

15. Accept the other quest Marshal McBride offers for you. This is quest will direct you to your class trainer. I have listed the quests for each class below.

16. Turn in [4] Blackrock Invasion at Deputy Willem. Accept the follow up [5] Ending the Invasion

19. Complete your trainer quest and turn it in.

20. Go across the river to the burning area. Kill Kurtok the Slayer in the northern part of the burned area to complete [5] Ending the Invasion.

21. Go northwest across the river toward the mine entrance north of the Abbey.

22. Kill 8 Kobold Laborers inside the mine for [5] Skirmish at Echo Ridge.

23. Return to Deputy Willem and turn in [5] Ending the Invasion. Accept [4] Voucher of Bravery

24. Return to Marshal McBride and turn in [5] Skirmish at Echo Ridge and [4] Voucher of Bravery. Accept [5] Report to Goldshire.

25. Visit your class trainer for any new skills that are available, then follow the road from the abbey south until you reach the walled area.