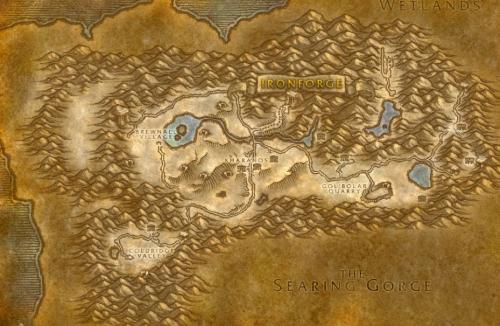 I tried my best to make a guide for the Dwarf and Gnome starting area (other races can come here too of course) for level 1-12. This guide is focused on questing rather than grinding, though some parts you may be asked to grind. Before we begin, it is a very good idea to download a couple of mods I frequently refer to in this guide:

I’m going to take this part from Jame’s guide because he does a good job of explaining it:
In case you don’t know how to install add-ons, make a folder called Interface in your World of Warcraft directory (if it doesn’t exist already). Then you open it and create a folder called Addons inside the Interface folder (if it doesn’t exist already). Now every Addon you want to install goes directly into the Addon folder. For example you download and unzip Titan Panel, you drag the folder called TITAN PANEL (not Interface or Addons) into the new Addon folder you created. You restart World of Warcraft completely and it should be working.
If it isn’t you might need to log out to your login screen and click on “Addons” in the left lower corner. Tick the box that says “Load out of date Addons”. Relaunch WoW.