So you decided to do your dailys, for gold or rep or something else, maybe just for fun.

First let’s see why are you doing the dailys?

The Baradin’s Wardens daily quests are split in to two areas.

These Daily quests are only available for you when your faction is in control of Tol Barad, The battle takes place every 2 hours 15 minutes.

You get the Dailys from the middle of the zone.

There’s a total of twelve different daily quests with three of them being static and the other nine being randomly selected in groups by 3 after each battle. This means that if you do all these dailys then and your faction win Tol Barad again after a battle, you can go back and there might be three new randomly selected dailys.

I would suggest you get a group for this part since Problim is a group quest and it’s easy to get overrun by the respawns inside the crypts.

The three static quests are:

Crocolisk HideThe nine others are (sorted by areas). You will always get the three dailys in the same area.
D-Block 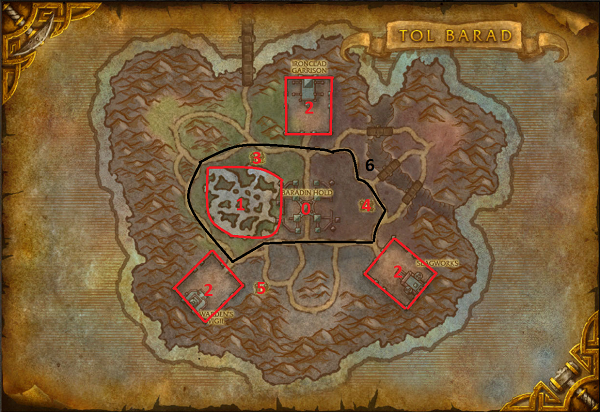 You can do these in the order you prefer, no need to follow my numbers
0. Quest Hub – Start here and pick the quests up.
1. Crockolisks for: Swamp Bait
2. Horde infantry for: The Leftovers
3. The D-Block for: D-Block,Cursed Shackles and Svarnos
4. Cursed Depths for: Clearing the Depths, Learning From the Past and The Imprisoned Archmage
5. The Hole for: Prison Revolt, Food From Below and The Warden
6. Problim pathing route for: A Huge Problem

This is the other part of Tol Barad that’s always open for both factions, you should be prepared for PvP combat while doing these dailys, and I would suggest you got atleast 1 or 2 others to go with to avoid being killed (tho it’s not needed).

Here’s alot of quests and they are all random, you will recive 5 or 6 quest every day. (as of patch 4.0.6 you will always recive 6 dailies.)
(I’ve choosen a different layout here since there’s so many quests) 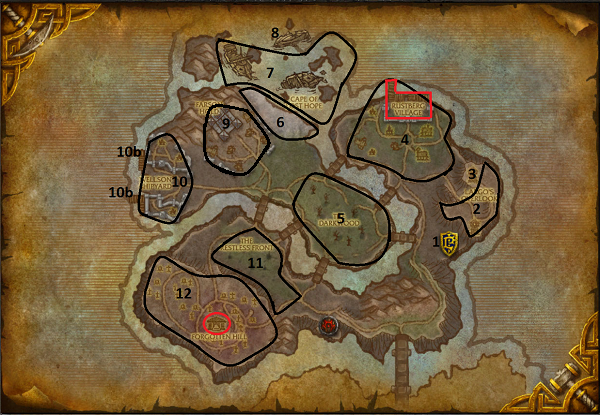 No dailys. Completing all the quests in Mount Hyjal and then using the tabard is your best option to get reputation. 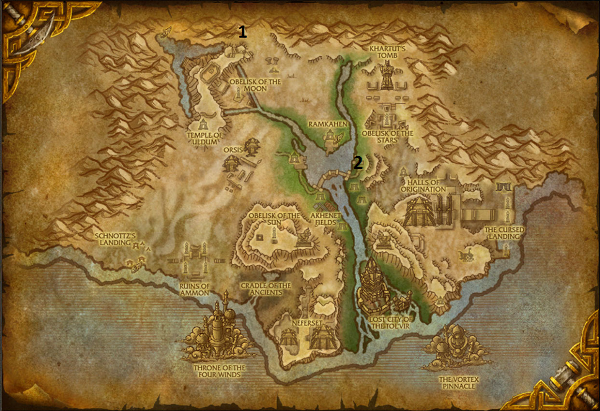 No dailys. Tabard is best option to get reputation and the quatermaster is located in vashj’ir, inside the Silver Tide Hollow, he’s always here no matter the amount of quests you completed in vashj’ir.

Therazane is Located in Deepholm and Requires that you have completed the zone to be able to start with the dailys.

There are five static dailys and one random and at honored you got 6 dailys available every day at honored and at reverd you got 7 available at revered, and of those two are random.

NOTE: if you’re only offerd 5 quests at Therazane’s Throne there’s one inside the crumbling depths in the first room after the entrance.

and one random of the following:

Revered
One random of the following: 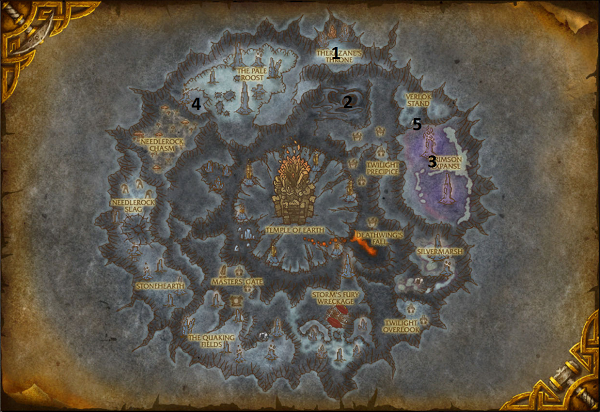 The Wildhammer clan is located in Twilight highlands and required that you have completed the quest up to and including thundermar (if someone can tell me what quests unlock the dailys I would be happy).

There’s a total of five dailys granting reputation with the Wildhammer Clan. 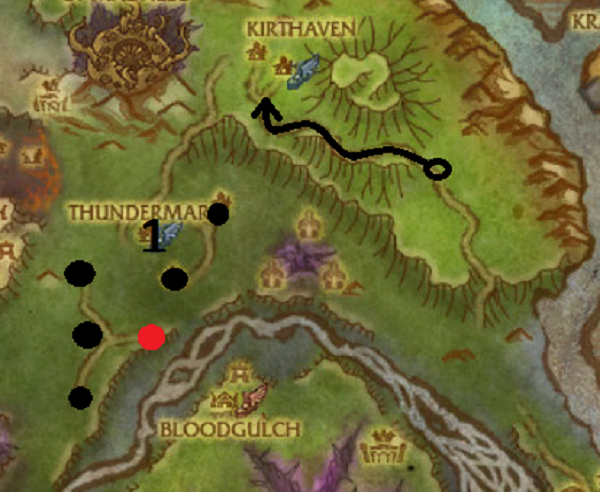 1. is the quest hub were you can pick the quests.

The Line is for Beer Run

Spawn points for Fight Like a Wildhammer,Kegs of Thundermar Ale and Never Leave a Dinner Behind

Professions
Are you doing the dailys for a Profession token or skill.

There are 5 different cooking dailys you will recive one random each day. All of them are located in Stormwind and all of these are awarding cooking skill and 1 or 2 Chef’s Award wich is the currency for all cataclysm cooking recipes. 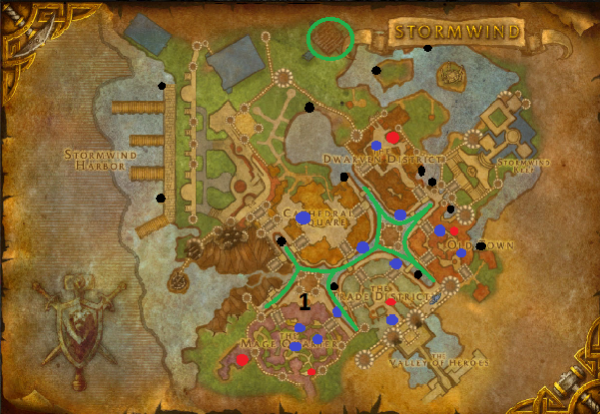 1.is were you collect the daily.

The Green line is for Canal Crab
The Green Circle is for Stormwind Pumpkin
There might be more spawn points than I listed but this should be enough for you to finish the quests.

There are 5 different fishing dailys. All of them are located in or close to Stormwind and all are awarding fishing skill and a Bag of Shiny Things. These only require that you have 1 skill in fishing. 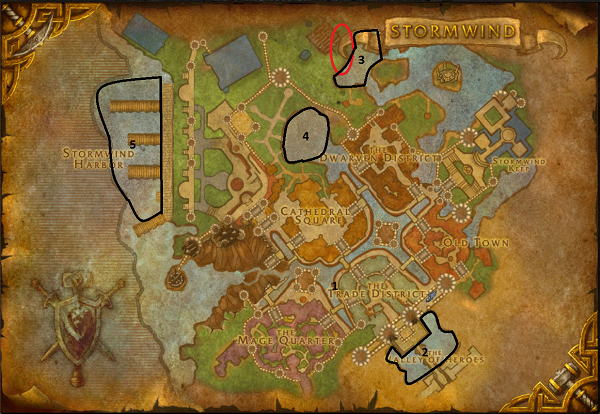 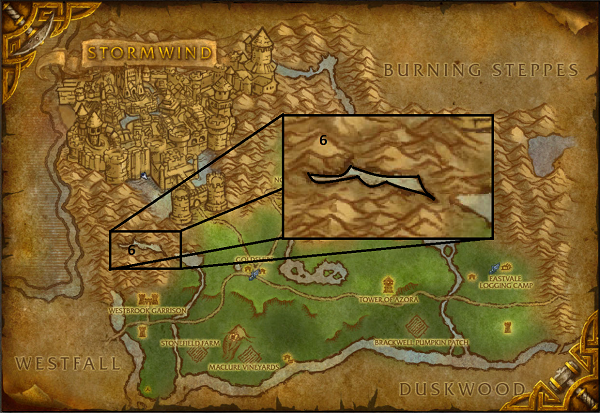 There are five different Jewelcrafting dailies,the lowest skill you need to start doing them are 475, and you need to be level 80.

That’s it for my guide to Cataclysm Dailys, maybe I’ll see you again tomorrow or you’re just sick of dailys and will do something else, I just hope this was helpfull.

p.s Please leave constructive comments to help me improve it or just tell me you liked it 🙂
p.p.s I will most likely add more screenshots to make the guide easier to follow but this should give you the general idea of what to do and were to do it.