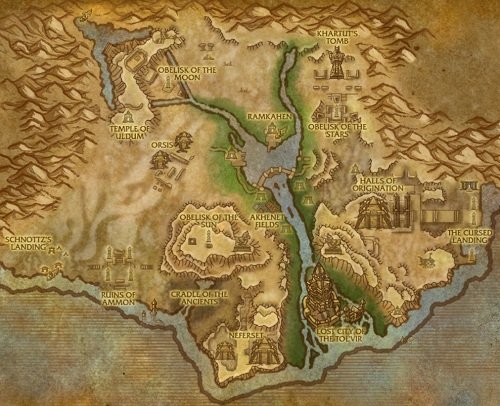 Introduction/Notes
This guide will cover the Horde quests in Uldum. I will cover 100% of the quests in the zone, with the exception of the dungeon breadcrumb quests. Please note that this is based on a play through of the BETA version of the zone. Things can and probably will change. I will do my best to maintain the accuracy of the quests and objectives until finalized in the live version.

Everything in this guide can be done solo unless I specifically state otherwise. All of the level 80+ zones in Cataclysm make very heavy use of phasing as you progress through the zone. Be aware of this if you are trying to get a group for anything, as they may not be in the same phase as you are.

You will need to be able to use a flying mount in this zone. You have been warned.

I highly suggest you make use of the built-in quest tracking on the world map. I will describe as best I can where the NPCs and quest objectives are, but the objective tracking on the in game map will show you precisely where to go in most cases. 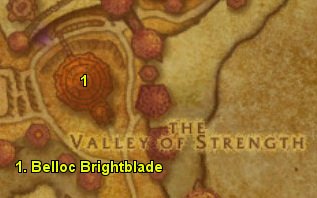 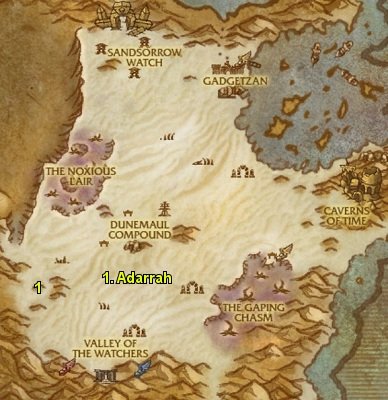 1. You should be in Orgrimmar and have the quest That’s No Pyramid!, which is the last quest picked up in Deepholm.

Go to the Valley of Strength in Orgrimmar. Find Belloc Brightcaller inside Grommash Hold. He is standing to the right of Garrosh.

2. Turn in That’s No Pyramid!. Accept the follow up quest Meetup with the Caravan.

4. Speak to Adarrah to turn in Meetup with the Caravan. Accept Easy Money.

To the left of Adarrah, hop on the camel named Lady Humps. Or at least try to. Enjoy the small cutscene.

5. Once you have control of your character again, you will find yourself inside the Lost City of the Tol’vir. Speak to Adarrah directly in front of you to turn in Easy Money.

You’ll be attacked by a guard, but he is easy to deal with. 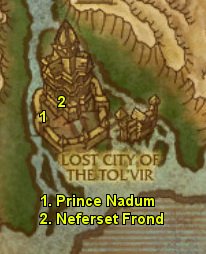 1. Speak to Prince Nadum, who is chained to the wall behind the cages. Accept the quest Traitors!.

2. Get on your flying mount and head west, into the raised terrace. Find the Nesferet Frond at about (61.7, 71.1). Click on it and watch the short cutscene. 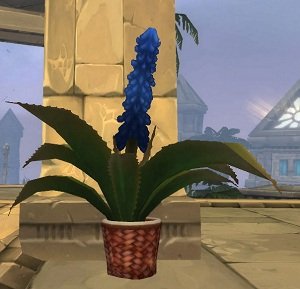 Once you regain control of your character, return to Prince Nadum.

3. Turn in Traitors!. Accept the two followup quests, Smoke in Their Eyes and Kavem the Callous.

4. Talk to Budd in the cage to the right of Prince Nadum. Accept Budd’s Plan.

5. As you complete the other quests, be sure to kill any of the Neferset you see until you have collected 6 Neferset Armor. The armor pieces can also be picked up in various places around this section of the city.

6. Head south. Enter the first building on your left to find Kavem the Callous. Kill him and loot the Neferset Key from his corpse to complete the quest.

7. Continue moving through this section of the city, using the Brazier Torch to burn bales of hay until you complete Smoke in Their Eyes. Also, make sure you have completed Budd’s Plan. 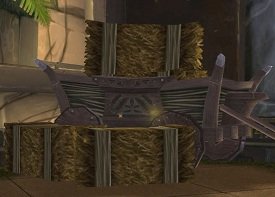 8. Return to the cages. Speak to Budd to turn in Budd’s Plan. Then turn in the other two quests to Prince Nadum.

9. Accept Escape From the Lost City from Prince Nadum. After the cutscene you will now find yourself in Ramkahen. 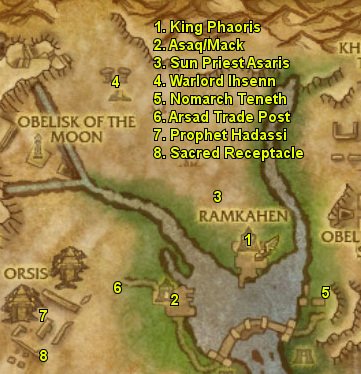 4. Right next Asaq, talk to Mack and accept the quest Take it to â€˜Em!.

6. When you arrive, speak to Sun Priest Asaris. Be sure to select his dialog option to complete the quest objective.

7. Accept both quests Asaris offers you, Relics of the Sun King and Venomblood Antidote.

8. Head in the desert area north and west of the Seal. Kill Venomblood Scorpids and use the Antidote Vial on their corpses to drain the poison. While doing this, kill any Wastewater Outriders you see until you have collected 4 Relics of the Sun King

Return to Sun Priest Asaris when both quests are complete.

9. Turn in, Relics of the Sun King and Venomblood Antidote. Accept the new quests he now offers, The Bandit Warlord.

Return again to Sun Priest Asaris and turn in the quest.

11. Fly southeast to the Tahret Grounds. You will find Nomarch Teneth there at about (60.3, 38.3). Speak to him to finish the final step of Impending Retribution.

12. Mount up and fly back to Ramkahen. Turn in Impending Retribution to King Phaoris. AcceptAl’Akir’s Vengance.

13. Fly to the Arsad Trade Post. You will find Prince Nadum there. Turn in Al’Akir’s Vengance. Accept the follow up quest now available, Minions of Al’Akir.

12. Next to Prince Nadum is General Ammantep. Get both of the quests he offers, Under the Choking Sands and The Prophet Hadassi.

13. The city of Orsis is just west of the trade post. As you go through the half-buried city, you will find Orsis Survivors in the sand. Click on them to rescue them. You will need to rescue 8 Survivors to complete Under the Choking Sands. While doing that, be sure to kill 6 Scions of Al’Akir. 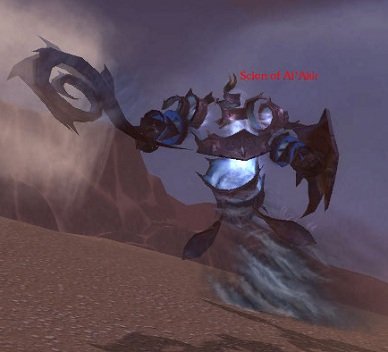 15. Head south to (39.9, 44.7). You will find the Sacred Receptacle inside the building there. Click on the Sand-Covered Hieroglyphs to turn in , The Prophet’s Dying Words. Accept Colossal Guardians.

16. The Colossus of the Sun is right next to where we left Prophet Hadassi. Click on the Colossus, which will cause him to attack you. Loot the Stone of the Sun from him once he is dead.

17. Head north, through the archway. You will find the Colossus of the Moon there. Click, kill, loot. Once you have the Stone of the Moon, return to the building housing the Sacred Receptacle.

If you have not done so, make sure both Under the Choking Sands and Minions of Al’Akir are complete.

19. Return to the Arsad Trade Post. Turn in Under the Choking Sands and The Scepter of Orsis to General Ammantep.

20. Turn in Minions of Al’Akir to Prince Nadum. Accept his followup, Send Word to Phaoris.

21. Fly back to Ramkahen. Turn in Send Word to Phaoris to King Phaoris. A short cutscene follows. When it is finished, find Prince Nadum just outside the building.