Journey from Maraudon to Silithus

This guide starts at level 50, it is the 3rd chapter of my guide. Before starting I suggest you read the introduction and recommendations of my 1st Chapter. If you are already level 50+ and just found this guide, I suggest you start at some point in the Chapter II so you get the following quests, which we will be doing in this chapter:

However, if at any moment in the guide you lack quest log space (because of a class quest you don’t want to abandon for exemple), then abandon [50] Into the Temple of Atal’Hakkar, you can easily get it back later on in Stormwind right before you go to the Sunken Temple.

Also, this guide doesn’t take into account tradeskills, class specific quests or PvP. It’s 100% focused on getting the most experience possible in the shortest possible time while doing a lot of quests and enjoying as much content as possible, any race/class combination can do this guide. The most part of the guide is doable solo, when it’s not it will be mentioned. The guide has been tested with four different characters, non twinked, played by the wow-pro team: a warrior, a mage, a rogue and a hunter to ensure that the guide is accessible for any class. Enjoy!

and [50] What the Flux? from Master Smith Burninate.

Note: If you ever need to sell and repair, you should go to this NPC.

Get the flight path. 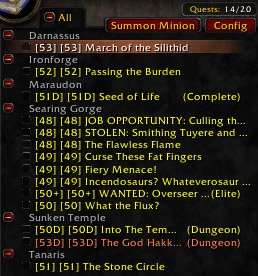 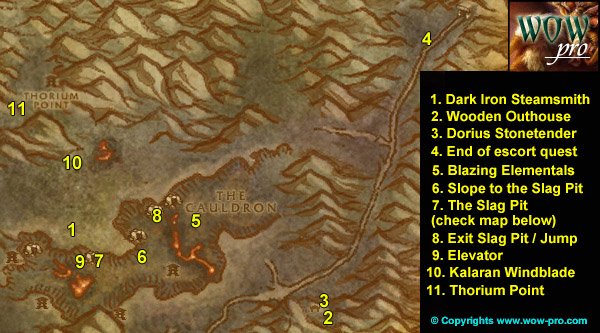 When you got both these items, you can say goodbye to your group and go back to Kalaran Windblade. You can also go to thorium point for a quick sell/repair if necessary.

Go to Arch Druid Staghelm, who is on top of the tower at the Cenarion Enclave and get the follow up [50] Un’Goro Soil.

From now on, while in Ungoro Crater look around for crystals. There is 4 types of crystals:

Red, Blue, Yellow and Green crystals. Loot them anytime you see them until you got 7 of each color. Also look for Ungoro Dirt Piles and loot the Un’goro soil from them. Un’goro soil also drops fairly often from most creatures in Un’goro crater, you should try to have at least about 50 Ungoro Soil before we leave Un’goro, because we will need extra soils for 2 other quests which will require you to transmuate Un’goro soils into Morrowgrain.

Turn in [50] Williden’s Journal and get [53] Expedition Salvation from Williden Marshal and [52] Alien Ecology from Hol’Anyee Marshal.

Open the “small pack” in your inventory and loot all the items from it, then turn in [52] It’s a Secret to Everybody at Linken (he’s inside a tree trunk south of Williden Marshal), don’t get the follow up yet. You can destroy the throwing daggers and the Faded Photograph from your inventory. 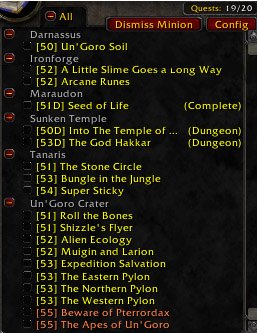 There’s a weapon merchant, use it to repair and sell junk. You can also destroy the extra power crystals if you still have any, for more bagspace.

And also beware of the Tyrant Devilsaurs, there is a few of them roaming in Un’Goro. They are lvl 55ish elite, run fast and hit hard. So watch your back.

Get out of the cave and get the quest from Linken [52] It’s a secret to everybody.

However, if after Blackrok Depths and all it’s quest XP rewards you are still level 59, here is one last bonus XP circuit (And remember, after patch 1.10 you will be able to cash in quests for gold – means epic mount sooner):

copyight at www.wow-pro.com, all rights reserved