Chapter III (50-60) – Journey from the Hinterlands to the Plaguelands

This is v2.0 of the guide. It has been revamped as mentioned in this news post to adapt to patch v2.3 changes. You can still find the old version of the guide here. At the same time, many other improvements have been made:

This guide starts at level 50. However I hope that you followed the 2nd chapter of this guide as well. Because a lot of pre-questing and flight path gathering is done in it and we will need it for this chapter. If you didn’t, it’s not that bad, you’ll just have to figure out yourself where to start, and if you are behind in XP, there will be optional circuits you can do to catch up. If you need guides for any other level range (from 1-41 for example) please take a look at this page.

This guide is made for FAST leveling through the use of Optimized Quest Circuits. With this guide, questing will be very efficient and you’ll not waste any second running around and trying to figure out in which order to do your quests. Follow each instruction carefully and you will see for yourself. The quest choices and order to do them are optimal so that you run as few as possible while doing the most possible, turning several quests at the same time. It will be like grinding, because you’ll be killing stuff almost non-stop, besides you’ll also be completing a bunch of quests at the same time!

Everything described in this guide can be done solo (beside when I say otherwise). You can, of course, follow this guide while duoing, grouping, it’s not a problem, it works too.

DISCLAIMER: This guide does NOT take into account tradeskills, class specific quests or PvP. It’s 100% focused on getting the most experience possible in the shortest possible time while doing a lot of quests and enjoying as much content as possible. Any race/class combination can do this guide. Any complaints about PvP, tradeskills, or class specific issues will be ignored.

To get the most out of my guide, you should get an addon which displays coordinates, because I use them to describe locations in my guide (x,y). You can use any addon you like, but here’s a very simple one I use.

Below is a list of other addons I use, this is 100% optional though, it’s mostly for people who are curious to know which addons I use:

Side Note: In case you don’t know how to install add-ons, simply download an addon from one of the links above and unzip it. Then drag the unziped folder in your Addon folder (full path is c:\Program Files\World of Warcraft\Interface\Addons). Then, restart World of Warcraft and it should be working.

If it isn’t working, you might need to log out to your character selection screen and click on “Addons” in the lower-left corner. Tick the box that says “Load out of date Addons”. Re-launch WoW.

These items might not always be available at the AH, so start checking early.

So you just finished the previous chapter? That means you should be in The Hinterlands right now, and your quest log should look like this:

If you did Zul’Farrak, you should also have:

If you did Uldaman, you should also have:

So let’s get started! 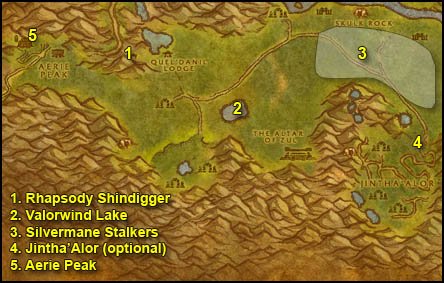 2. Ride southeast to Valorwind Lake at (40,60). Dive in and look for some white/red mushroom named Violet Tragan. Loot one. (Don’t right click it when its in your inventory!)

3. Ride northeast towards the area in between Shaol’Watha and Jintha’Alor (65,50). At this spot and widely around it you should find Silvermane Stalkers. They are level 47-48 wolves and they are stealthed. Run circles in the area I described among the trees, hit tab while looking around. You should find them quickly, they drop the stuff you need 40% of the time. Keep doing this until you got 5 Silvermane Stalker Flanks.

(Warlocks: Buff yourself with detect invisibility)

4. If you did NOT do Zul’Farrak and do not have the following quests, just skip to paragraph 5.

If you got those quests, go to Jintha’Alor (66,66). Fight your way to the top of Jintha’Alor, then go to Vile Priestess Hexx (59,78). She has one guard, you can wait till the Priestess wanders in the cave and get her guard solo. Then get the Priestess solo, kill her and loot the Hexx’s key from her. Also don’t forget to forge the Mallet of Zul’Farrak, just click your Sacred Mallet while being next to the Altar. Go inside the cave behind where you fought the Vile Priestess. Follow this path to find the Ancient Egg:

Once you have the Ancient Egg, clear the way out of the cave back to the Altar, from there go north towards the other cave at (56,68). Kill the two trolls guarding it’s entrance. Then go through the cave and on the other side of it you’ll find Sharpbeak in it’s cage. Free Sharpbeak and watch him fly away with his parents.

5. You are done, hearthstone back to Aerie Peak.

Turn in the quest [47] Food for Baby and get the follow up [48] Becoming a Parent. Turn it in, congratulations on your new pet. It’s useless but it’s cute (and wasn’t a waste of time XP wise).
Turn in [51] Saving Sharpbeak.

Fly to Ironforge. If you didn’t do the Uldaman instance, skip to the next paragraph. If you did Uldaman, go northeast to the Hall of Explorers, turn in