Welcome to the Northrend Daily Guide, my name is Justin. This is my first HORDE guide ever, so please leave suggestions and/or tips on how to improve my guides to better suit you. I’ve always believed gold is the secret to success in this game, and with gold the game becomes easier. In an ongoing series of guides I will be bringing out, I will show you to make simple, legal, fast cash. In this issue of the guide we will be exploring daily quests. Daily quests are quests you can do once every day, each time rewarding you a sum of gold. Now before we get started make sure you meet these basic requirements:

If you do not meet these requirements don’t panic, I have some solutions. First of all, if you aren’t level 80 I suggest following Jame’s Guides thoroughly until you reach 80. If you do not have the money (approximately 2100 gold) to purchase your basic flying mount and cold weather flying training, you probably haven’t finished all of the regular quests in Northrend. I suggest completing each zone in Northrend because regular quests give almost the same amount of gold as 80 daily quests do. Finally, If you haven’t completed quests in Icecrown yet, do them. Doing these quests will not only open up much needed daily quests, but will also provide you with extra gold.

Head to Dalaran, then to Krasus Landing [68,43]. Once there talk to Sky-Reaver Klum, who is located to the immediate right as you walk in, with four body guards. Click the “Take me to the ship.” option.

When you land get the quest [80]Blood of the Chosen from a wandering orc named Warbringer Davos Rioht. After finding the orc, find the room on the deck with a horde flag outside it. Inside get the following quests from Koltira Deathweaver:

Find Brother Keltan patting around the ship, blood elf with blue-green hair. When you find him get his quest: [80]Slaves to Saronite. Head down one of the two staircases leading down to the center of the ship. Go to the very back of the center of the ship and you should see a goblin,get the quests [80]Volatility and [80]Retest Now from him. 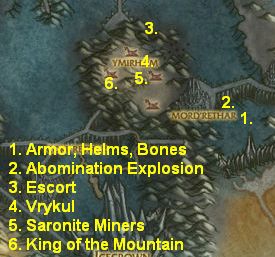 1.Mount up and get out of the ship. Head South-Southeast to the Broken Front [68,62]. Once you’ve arrived here we’re going to do two things:

-Look for Pile of Bones, Abandoned Armor, and Abandoned Helm’s which are scattered all over the ground.

Once you have collected a pile of bones, an abandoned armor, and an abandoned helm, use your Copperclaw’s Volatile Oil on the ground and watch a Skytalon take it and explode. Do this three times to complete [80]Volatility.

2.After you get a Chilled Abomination Guts head to [66,63] and use your Abomination Reanimation Kit. This will allow you to control an Abomination pet for a little while. You have two abilities: Faltulate and Burst at the Seams. Faltulate stuns all the targets around the Abomination, and Burst at the Seams makes your pet explode, killing all targets near him. When you pet is summoned, send him into the pile of undead right in front of the Death Gate [66,33]. Stun adds as you pull more then explode when you have a decent amount of adds. Remember to be close to your abomination when he explodes, or you won’t get credit for the kills. Rinse and Repeat until [80]That’s Abominable! is completed.

==Note== Remember each time your Abomination dies you have to kill more Hulking Abominations to get Chilled Abomination Guts to resummon your pet.

==Note== from now on keep any Vrykul Bones you get.

3.Mount up and head north to a pit with horde soldiers in it [58,46]. You should see two daily quests, but we’re only doing one. Pick up [80]Assault by Ground and start the escort. You’ll be escorting 4 Korkron Infantry and a Kor’Kron Squad Leader through Vrykul assaults on the way to Ymirheim. You’ll get 2-3 ambushes of about 4-5 Vrykul, all of which are ranged. Let the NPCs tank the adds as you kill one add at a time. DO NOT let the NPCs die however, or you’ll need to restart. After the escort is finished proceed to step 4.

4.Continue west through Ymirheim [59,53]. Slay the rest of the Vrykul you need for [80]Blood of the Chosen as you head up the slope going north.

5.Once you get to the top of the slope take a left and enter the cave. In the mine you’ll see NPC’s called Saronite Mine Slaves. Approach one and click the option “Go on, you’re free. Get out of here!” The NPC will either run free and you’ll get credit for your quest, or will attack you. He might also just run away, doing neither. Talk to these until [80]Slaves to Saronite is completed.

6.Get out of the mine and head west to a goblin called Blast Thunderbomb [51,57]. Now before you get his quest [80]King of the Mountain, watch this short video in high quality.

Video: King of the Mountain

After you turn in the quest (as instructed on the video) mount up and head back to the pit [58,46] where [80]Assault by Ground was and turn the quest in. 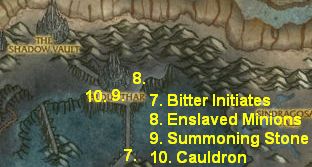 7.Head to the north of Ymirheim where you’ll find a cultist camp [55,46]. Start killing Bitter Initiate’s. WARNING: Do not kill Dark Subjugator. When an Initiate drops an Orb of Illusion, find a Dark Subjugator and target it, use the orb on them. Do this three times until [80]Drag and Drop is completed.

8.Mount up and head north to Aldur’thar [54,31]. Drink your Diluted Cult Tonic and start to kill everything around here. Focus on killing Void Summoner’s and their Enslaved Minions. Use your Rod of Siphoning on the corpses of Enslaved Minions to get dark matter. Keep clearing around here until you have 10 Tainted Essence’s and 5 Dark Matter.

9.After you have 10 Tainted Essence’s and 5 Dark Matter, head to a cultist camp about 200 yards away from where the summoner’s were [53,33]. Dismount in the center of the camp and click the Summoning Stone. When your done channeling, re mount and head west [48,34].

Do not get [80]Shoot Em’ Up. This quest has been bugged since the PTR and is extremely hard to do, thus a waste of time.

2.Mount up and head southwest to Jotunheim [32,42]. You might notice we are outside a cave, go inside and turn in 15 Vrykul Bones for a Fate Rune of your choice. Eat this and it gives you 30 minute buff to help you out with your quests.

3.Start killing Vrykul while heading north through Jotunheim. Remember to use your Ebon Blade Banner on the corpses of dead Vrykul. Keep any Vrykul Bones you get here.

4.Clear until you get to a ledge with many Proto-Drakes on it [27,39]. Don’t worry if you haven’t finished your 15 Vrykul kills yet. Get close to one of the Photo-Drake’s and right click it to mount it. Use your Burst of Speed spell to move quickly, and use your Strafe Jotunheim Building spell to light the roofs of buildings here on fire. Go around and light 8 roofs on fire until [80]Vile Like Fire! is completed.

5.Once you’ve gotten your 8 roofs lit, demount by clicking the red drop arrow on the right hand side of your custom bar. Keep killing Vrykul until you have [80]Leave Our Mark completed.

6.Mount up and head west along the cliff line to Death’s Rise [20,47]. Sell junk. Get the following quests here:

1.Head northwest to Onslaught Harbor. Once you get there make sure Bone Gryphon is on your bar. Start killing Gryphon Rider’s while on your Bone Gryphon, and use your Darkmender’s Tincture on them. Also if they drop a key you should use the key on the chest’s lying around the ground and on the towers.

Tip: Once you’ve gotten all your Gryphon Rider’s slain, go to the beaches on the northern side of the island [6,39] and clear here for the rest of your intel documents, lots of Scarlet mobs around here.

Do this until you complete [80]No Fly Zone, [80]From Their Corpses, Rise!, and [80]Intelligence Gathering.

3.Mount up and head back to the ship, turn in everything here.

From the ship head southeast to Crusaders’ Pinnacle [79,72] and take the flight to Conquest Hold.

Mount up and head northeast to Blue Sky Logging Grounds [34,32]. At this location pick up the following quests:

Head into the Logging Grounds [34,40] and complete the following objectives:

1.Kill 15 alliance units
2.Use your Renewing Bandage on 10 Wounded Skirmishers (only counts if the person is kneeling or lying down)
3.Gather the parts needed for [74]Making Repair which are scattered all over the ground.

Once these three objectives are complete, find a Broken-Down Shredder.

Hop in it and run it back to the camp [34,32] click the spell “Shredder Delivery. Do this three times. Turn in:

Mount up and fly south-southwest to Venture Bay [10,76]. At this camp pick up the following quests:

Mount up and go back to the camp in Venture Bay. Turn in all the quests.

Hope you had fun and hope you continue to use this daily guide. More gold guides are coming out, please leave tips and suggestions in the comments, I will read them.