Lord Kazzak is one of the two Outdoor boss mobs designed for a raid force. He is located in the Tainted Scar, in the southwest part of the Blasted Lands. He is a very well designed encounter, and a fun, fast and furious type of fight. He is VERY easy if everyone in your raid knows what to do exactly. But he is also very hard for the same reason: One person doing a mistake can ruin the whole raid. So read this guide carefully, and when you organize a Lord Kazzak raid, make sure that everyone knows the drill before engagin him. Or you will wipe, it is guaranteed, even if you go there with 100 people assisting your raid, you will wipe. So don’t think about numbers and power, all you need is one balanced raid, and strategy.

Setting up the raid:

The whole raid must install CTRaidassist and get it to work. This Mod allows you to see the Health bars from everyone in your raid, as well as their mana, buffs, debuffs, and many other features. It is a must have for your raid to work. Especially has a mana conserve fonction, which allows your healers to set up a value at which their heals get automatically aborted, to not waste mana. (Exemple: 3 Priests are spamming Flash heals on the main tank, you set up the mana conserve value at 90%. The Flash heal will automatically abort at the last 0.5 second if the target you are healing is currently above 90% health.)

Priests, Mages, Druids, Paladins should install Decursive to make their lives easier. Decursive is a mod that detects Status ailments in your raid and automatically cures them by just pressing one key (per cure). Saves you the trouble of having to target each person in your raid who needs a dispel or a curse removal.

Now that your raid is filled up, call the move to the Blasted Lands, rally at the entrance to the tainted scar. Send a rogue scout at the first stop (yellow dot on the map). Kazzak will come close to this spot and stand still for about 1 Minute at the red dot marked #1. Right after Kazzak gets moving (toward spot #2), the rogue will call the move. Have warlocks cast soulstone resurection on different priests, and move all together through the tainted scar, follow the yellow route on the map, until you reach the yellow dot (if you use CTMod, it’s at location [37;79]).
You might want to let your tanks be in the front so they get the hits, just train through the mobs, don’t bother fighting them, they respawn fast and are annoying. If some people die on the way to the spot, and that they think they died in a crowded spot where they won’t be able to be recovered, just have them talk to the spirit healer, and summon them.

Warning: Kazzak has quite a huge aggro range, so you want your entire raid to be as far up against the mountain wall as possible when you reach the first stop. And I really mean it, just one person being a bit too much in the front can get him to aggro. 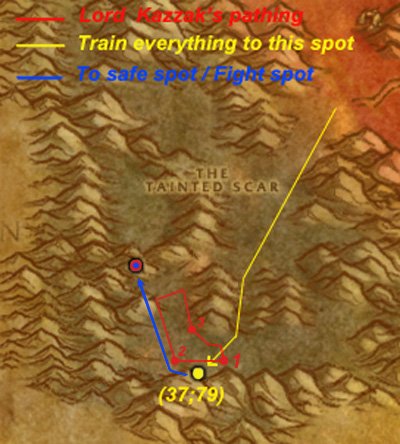 Once your whole raid is gathered and ready to move. Wait for Lord Kazzak to move away from spot 2. Call the move, and have everyone hug the left wall until you reach the Safe spot / Fight spot (blue/red dot). There is a Dreadlord close to it, but if everybody hugs the left wall it can be avoided for now. If someone aggros it, just kill it. You will then be at the safe spot, this is also where you will fight Lord Kazzak. But first, it is time for you to talk strategy with your raid.

If anyone dies during the fight, you lost. You have 3 Minute max to kill Lord Kazzak, and having him get a 70K heal means game over.

Put all the melees in the same groups. Rogues, Warriors (minus the MT), Paladins. Give each of these melee groups a Paladin (or a Priest if you are Horde) for Dispell/cleanse duty. The primary role of these Paladins/Priests will be to Remove Twisted Reflection as fast as possible from their whole group. Their secondary role will be to heal the damage taken from cleave.

Put your Main tank in a group with a warlock (for IMP pet sta buff). If you have spare warlocks, put them in melee groups, the extra HP helps, you never know who will get crit cleaves and a bolt, with bad luck, you could lose a rogue.

Assign one priest or Paladin to your Main tank. That person must make sure Twisted Reflection is dispelled from your Maintank the second it hits. If he is too slow by 0.5 second, Lord Kazzak will manage to heal up.

Assign at least 3 Healers to your main tank, their only task will be to spam heals on the main tank during the whole fight. (Flash heals, Healing touch (druids), Healing Wave(Shamans). The fight only last 3 minutes so they shouldn’t go out of mana, especially if they use the manaconserve tool from CTRaidassist.

You should have about 4 Spare healers (that includes also druids, shamans, paladins.) at this point, if you went with the minimum healer required. Put 2 Of them on healing the casters group from Shadowbolts. They can easily do that with the Raidbar. Put the rest of your healers to heal the melees. The Cleave damage can be sometimes heavy, and the people in charge of Dispelling / Cleansing might have already a lot to do.

Make sure you position a few curse removers behind the melees too, in case one of them becomes the target of the bomb curse. Preferably have druids assigned to this task, since mages should be primarly focusing on DPS.

Once everyone is buffed and ready, have the whole raid buffed with shadow resistances. (since they only last 10 Minute, you better buff that as last thing).

Wait until Lord Kazzak is at Spot 2 (check the map below), he will stay there 1 minute. So pull the Dreadlord on the left and kill it quickly. Then just wait until Lord Kazzak starts moving towards your raid, have your Main tank go down the moutain and wait for it to aggro.

The main tank needs to generate aggro as fast as possible, so the raid can start doing DPS immediatly. Every second counts. So the best thing would be to use a Mighty Rage potion and to spam Sunder Armors, Shield Discipline + Shield bash, then alternate Sunder Armors and Heroic strikes.
If your main tank is doing a good job, everyone should be able to go full DPS after 10 Seconds into the fight. 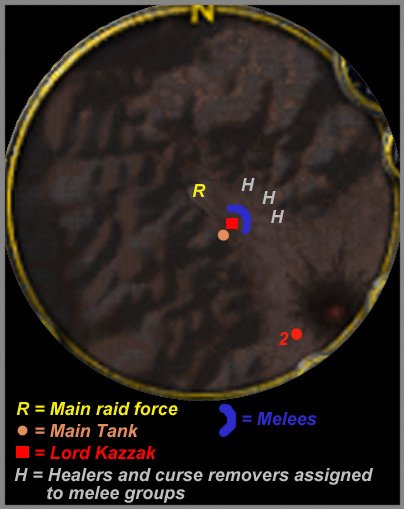 When those 3 requirements are met, Lord Kazzak is actually an easy fight. The only difficulty is that you have no room for mistakes. However, you can easily run back, rez up, and try him as much as you need, until everyone knows the drill. And you will take him down most likely after 2 or 3 attempts, if you follow this guide carefully.

He is certainly worth the time! 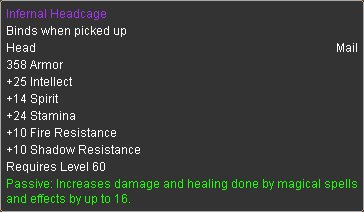 So good luck, and have fun slaying this demon!