Welcome to the Cataclysm ready world of Night Elves. All the hard work and credit should primarily go to Solitha who made this guide possible.

Welcome to Shadowglen. Right in front of you is Ilthalaine(58,44), and your first quest: The Balance of Nature. 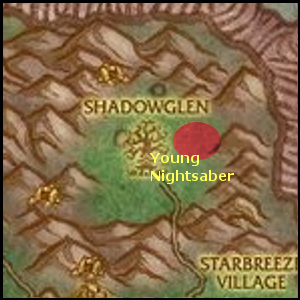 All around behind you are Young Nightsabers. Kill 6 of them. They are purple and black and there is a rich supply of them slighly north east of your location. Once you have completed this, Return to Conservator Ilthalaine
Turn in The Balance of Nature, and take the follow ups Fel Moss Corruption, and A Favor for Melithar.

Slightly to the north you’ll find Melithar Staghelm(59,42). Turn in A Favor for Melithar, and pick up Demonic Thieves. 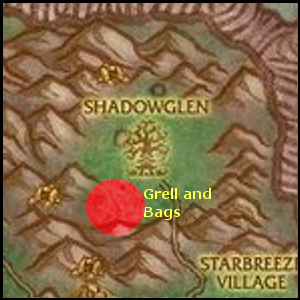 Head west to the first Grell camp (56,45). Kill Grells for Fel Moss, and search the camp for Melithar’s Stolen Bags. If needed, search Northwestward, as there is a second Grell camp there. The bags can spawn in the camps or around the trees between them. Continue killing and searching this area until you have completed both quests.

Return east, and turn in Demonic Thieves and Fel Moss Corruption. Both Melithar and Ithalaine appear to have a quest, but are offering the same one, so just pick it up from whichever one you like. This quest leads you to your Class Trainer.

Go into the building just to the north, in the great tree Aldrassil. Trainers are found:

Turn in your Sigil quest, and take the follow-up. Use the trainer to learn the skill required, use it as requested, then turn it back in. Pick up the followup, Priestess of the Moon.

Exit Aldrassil and circle around it to the northwest side. Between two pools you’ll find Dentaria Silverglade(57,33). Turn in Priestess of the Moon and get Iverron’s Antidote. Immediately around both pools you should see several Moonpetal Lily plants

. Gather 7 of them, then return to Dentaria.

Turn in Iverron’s Antidote, pick up The Woodland Protector. 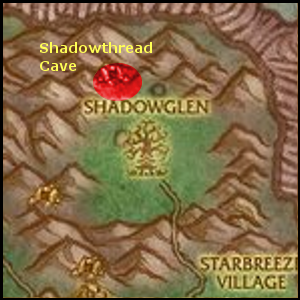 Work your way into the cave, choosing whatever path you prefer. Tarindrella will join you when you get far enough into the cave. Turn in The Woodland Protector, pick up Webwood Corruption. Kill 12 Webwood Spiders. Tarindrella will go with you and assist you in combat. Once complete, turn in Webwood Corruption, and pick up Vile Touch. To get to the right part of the cave, you’ll want to find the middle path from the entrance. Follow it to the north and northwest. At the northwest-most point the cave will curve upward to the right. It opens onto a large ledge, with several spider eggs visible, and Githyiss the Vile. Kill Githyiss.

Go northeast to the Moonwell

(59,33). At each of the moonwells along this chain, a Shade of the Kaldorei will appear, and tell you some of the Night Elf storyline; you don’t need to listen to it, but it’s a nice little bit of lore immersion. Find the Crystal Phial in your inventory and right-click on it to fill it. Return southwest to Dentaria. Turn in Teldrassil: Crown of Azeroth and pick up Precious Waters.

Turn and look directly south. You’ll see the bottom of a very long ramp. Go to it and follow it up to its end. Inside a small building at the top is Tenaron Stormgrip. Turn in Precious Waters, and pick up Teldrassil: Passing Awareness. Tenaron will give you a slow-fall buff called Wind’s Embrace; feel free to jump off the ramp and enjoy the leisurely float down to the ground! (Evidently I’m not the only one to have died this way before Cataclysm, wkjezz) 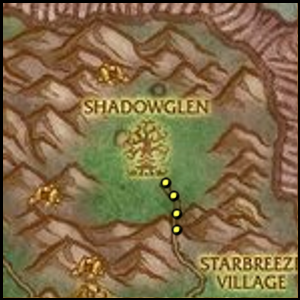 From Aldrassil, follow the road southeast. At the exit to Shadowglen, pick up the quest Dolanaar Delivery from Porthannius(61,47).

That concludes the level 1-5 portion of the guide. I hope you enjoyed it, and stay tuned for Part 2; levels 6 through 12.