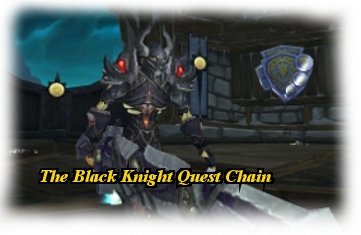 The Black Knight quest chain was introduced in patch 3.1 together with The Argent Tournament. Depends on you’re horde or alliance, the quest will lead you to either Westfall or Silverpine Forest. The guide will unlock the known group daily for The Argent Tournament: Threat from Above.

If Alliance: Go to Moonbrook in Westfall, the book you need for the quest is in the house close to the stables (see This picture from Thottbot)

If Horde: You will have to loot a book in Valgan’s Field in Silverpine Forest. The book can be found in the southern house, on the first floor ( watch this from Thottbot).

When you’re done, turn in the quest back at The Argent Tournament Grounds.

Get the follow up; [80] The Seer’s Crystal, you’ll have to kill an Unbound Seer in Crystalsong Forest. They can be found around 46,42 – A bit east of Dalaran City. Kill the unbound Seer, and loot he’s crystal. When you’re done, turn it in at Argent Tournament.

Get [80] The Stories Dead Men Tell which becomes availible to you.
You can complete this quest by looting the 3 corpses at the graveyard just east of The Argent Tournament Grounds. Loot the 3 corpses, and turn it in.

Get [80] There’s Something About The Squire. You’ll have to find the Black Knight’s Squire which can be found in the Forlorn Woods in Crystalsong Forest. Kill Skeletal Woodcutters nearby until you loot a femur. Stand behind the squire and use the femur to *sap* him. Loot him then return to the Argent Tourney grounds to turn it in.

You should now be able to get [80] The Black Knight’s Orders. First you need to get the Black Knight’s gryphon. You can find it here. Talk to it, and it will automatical fly you to the tent. Inside the tent, you’ll find some Cult of The Damned members, kill them and loot the invitation and the orders. They are in the end of the tent.

When you’re done, fly back on either the gryphon or your flying mount (if any).

==Note== You can’t continue the questline before you are Champion with atleast one faction. Of course you can continue when you’ve earned the Champion rank.

The Black Knight quest chain ends here, you can fight him in the The Crusader’s Coliseum, as the final boss in Trial of the Champion.

–> Back to The Argent Tournament Guide (Alliance).