The Snows of Northrend – In 20 steps

The Snows of Northrend

Introduction
This guide is an guide on how to complete “The Snows of Northrend” Achievement,
it lists all quests and explains how to do them, I have also tried to use the same color coding and formatting as Jame uses in his leveling guide because people find it’s easier to do it the way people are familiar with.

Okay then we are almost ready to start, just one last thing:
Credit to those who deserves it.
– Brune For helping me with spelling corrections and formating of the guide.
– Jame For making this guide possible at all;) and for the help.
– All who post feedback/comments here:)

“Note: Last bits of formatiing of headlines etc. will come within the next few days, I have set the guide back to finished so it should be readable”

1. Where in the World is Hemet Nesingwary?
Archmage Pentarus in Krasus’ Landing in Dalaran offers this quest at level 76.
Once you’ve got the quest, and are ready to leave Dalaran, talk to Archmage Pentarus and he will teleport you to Scholar Basin close to a guy named Monte Muzzleshot (39,58), Deliver the quest to him and get the follow up [Welcome to Sholazar Basin].

2. Welcome to Sholazar Basin
Travel east to Nessingwary Base Camp and deliver the quest to Hemet Nesingwary(27,58)

3. The Camp
There are three quests in the camp, get all of them:
[It Could Be Anywhere!] From Chad.
[Venture Co. Misadventure] from Debaar.
[Need an Engine, Take an Engine] from Weslex Quickwrench to the east of the camp.

Note: The ring for [It Could Be Anywhere!] the ring can drop from ANY mob in the zone so just keep the quest and hand it in when you get it.

4.Need an Engine, Take an Engine
Travel back towards where the guy in the parachute was, in the same area you should see a crashed plane, and in front of it is the [Flying Machine Engine] (38,56) loot it and return to Weslex Quickwrench
turn in the quest and get the follow-up [Have a Part, Give a Part]

5. Have a Part, Give a Part
Go to Swindlegrin’s Dig(32,47) to the north/northeast, it’s right on the north side of The Suntouched Pillar.
Go around here and kill Venture Co. Ruffians and Excavators and pick up [Venture Co. Spare Parts] from the ground,while looking for Engineer Helice(35,47) standing in the middle of the digsite, she gives the quest [Engineering a Disaster]
If she’s not here it means someone else is escorting her, she’ll probably be back in a few minutes. Take her quest and escort her to safety, after that go back to the digsite and do what you need to complete the two quests, then return to the Nesingwary Base Camp.
________________________________________

6. Back in Camp
Deliver [Engineering a Disaster].
Deliver [Venture Co. Misadventure] get the follow-up [Wipe That Grin Off His Face].
Deliver [Have a Part, Give a Part]. Now Weslex will repair/rebuild his flying machine and it becomes a Flight Master. Get the new Flight path.

Optional: Right next to Weslex is Professor Calvert, talk to her and get the quest [Aerial Surveillance], we will go to where it’s delivered later so you can just pick it up now if you want to.

7. Wipe That Grin Off His Face
Go back to Swindlegrin’s Dig(32,47)
Meatpie is a big blue guy, patrolling a Wooden ramp (35,49)
Foreman Swindlegrin is a Goblin inside a shredder machine, he’s located atop of the same ramp as Meatpie is patrolling. Kill them both and return to Nesingwary Base Camp.

8. Shoot The Apple!!!
Deliver [Wipe That Grin Off His Face] to Debaar, this will make 3 new quests available, go to Drostan first and get the quest [Kick, What Kick?]. Equip the RJR Rifle and target Lucky Wilhelm and click it to complete the quest.
Deliver the quest and get the follow-up [The Great Hunter’s Challenge].
Also get [Rhino Mastery: The Test] & [Dreadsaber Mastery: Becoming a Predator].

9.Let the Killing Begin!
Okay now we are going to kill Dreadsabers and Shardhorn Rhinos until you have got 15 kills of each.
I recommend killing them in this area marked by blue/light blue. 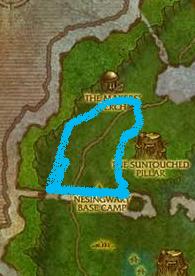 When you are done return to Nesingwary Base Camp.

Three new quests should be available, they are:
[Some Make Lemonade, Some Make Liquor].
[Crocolisk Mastery: The Trial].
[A Steak Fit for a Hunter].

11: To the Oracle
Walk south from the Nesingwary Base Camp across a wood “bridge”
and continue south, on the left side you should see Oracle Soo-rahm(25,66).
He should be easy to spot by the yellow â€œ?â€ on the mini map.
Deliver [Rhino Mastery: The Chase] and get [An Offering for Soo-rahm].

Picture posted by: “menace” on www.wowhead.com

Right click a vine to make a random fruit drop down, loot it, keep running around killing cobras and crocs while using vines to get fruit. Also sometimes there might spawn an NPC instead of a piece of fruit, talk to him/her to get a fruit of your choice:)

Do this until you got the following quests completed:
[An Offering for Soo-rahm]
[Crocolisk Mastery: The Trial]
[Some Make Lemonade, Some Make Liquor]

Go south east to River’s Heart(50,61)
If you don’t have the Flight path there, get it now.
Optional: turn in the quest [Aerial Survillance].

Fly back to Nesingwary Base Camp.

We need to click things,
There are 5 things to click on. There are 3 barrels: Papayas, Bananas & Oranges. Also there is a Brazier and a Pressure Valve.
Take a look around so you learn what’s where, then find a place where you can click all of them easily, I did it in front of the bananas. When you are ready talk to “Tipsy” McManus to start the event. When you are done, a barrel will spawn. Loot it, and then deliver the quest.

14. Grazer & Oracle steaks… Hey Wait a sec!
Then return to Oracle Soo-rahm(25,66).
When you pass the river look for Sandfern, green bushes that you can loot for the quest [Crocolisk Mastery: The Plan].
Remember to kill Longneck Grazers for [A Steak Fit for a Hunter].
Deliver [An Offering for Soo-rahm], get the follow-up [The Bones of Nozronn].
Go south to The Bones of Nozron, in front of the big skeleton there’s an Offering Bowl,
stand next to it and use the [Soo-rahm’s Incense].
Wait for the event to end and the quest to complete.
Travel back to the River, look for Sandfern, go back to the Nesingwary Base Camp.
Deliver [The Bones of Nozronn] and get [Rhino Mastery: The Kill].

15. Tracking & Killing
Go North/Northeast to Bittertide Lake(36,41).
At the beach there, you should see “Dreadsaber Tracks” in the sand.
Right click them, and looking Sandfern plants to loot.
Walk around in the area and the beach until you complete both [Crocolisk Mastery: The Plan] & [Dreadsaber Mastery: Stalking the Prey].
If you have trouble with the footsteps/finding the place this video might help:
http://www.youtube.com/watch?v=r0yJJ0MJNrQ

16. Ready for more Kills?
Deliver [Rhino Mastery: The Kill].
Deliver [Crocolisk Mastery: The Plan] get [Crocolisk Mastery: The Ambush].
Deliver [Dreadsaber Mastery: Stalking the Prey] get [Dreadsaber Mastery: Ready to Pounce].
Go to the flight master and fly to River’s heart.
Right across the lake from where u land(west from landing area) there’s a hug Log(46,63)
Go to it, stand on the middle of the upper part of it and use the [Sandfern Disguise] this will make
Bushwacker appear, Kill and loot him. go back to River’s Heart and fly back to the Nesingwary Base Camp.
Note: If you have trouble finding the log or the spot to sue the disguise this video might help:
http://www.youtube.com/watch?v=marpgKd4EbI

Go North/Northeast to Bittertide Lake(36,41) the place where we found the “Dreadsaber Tracks” in the sand
North West of that beach on the top of the cliffs there before the waterfall(32,35)
There you will find a Dreadsaber called Shango kill him and loot him.
And then return to Nesingwary Base Camp.

17. The Drakestalker
Deliver [Crocolisk Mastery: The Ambush]
Deliver [Dreadsaber Mastery: Ready to Pounce]
A new quest should now be available from Hemet Nesingway
get the quest [In Search of Bigger Game] from Hemet.
If you are not done with [A Steak Fit for a Hunter] yet
you might want to go south of the river and kill Longneck Grazer
until you got all 5 steaks, then go deliver the quest.
Travel northeast to Dorian’s Outpost(42,28)
Marked on the map below by a red circle: 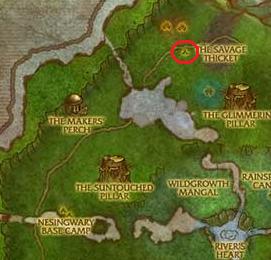 18. Drake Hunting
Go straight West from Dorian into The Savage Thicket
Kill Primodial Drake’s and look for Big eggs, Kill the eggs and a Hatchling will spawn, pick it up.
Walk around in this area until you have killed 6 drakes and picked up 6 hatchlings.
then return to Dorian and Deliver:
[Sharpening Your Talons]
[Securing the Bait]
New quests will be available, pick up [A Mammoth Undertaking] from Zootfizzle.

19. A Mammoth Undertaking
Okay go south of Dorian’s Outpost
and find a Shattertusk Mammoth, walk close to it and use Mammoth Harness on it, then ride it
back to Dorian’s Outpost, use ability #1 to deliver it and then talk to Zootfizzle. and deliver
[A Mammoth Undertaking]
Note: It’s the neutral Mammoth’s u need NOT the Bulls they are aggressive.
also there is reported some bugs in this quest so if one Mammoth don’t work, just try another.

Here is how to use the abilities
#1 Standard Melee Attack ability.
#4 Target for Hemet, Makes Hemet attack that target, use it on her often.
#5 Charge, gain some distance, charge her to stun her for a few seconds.
#6 Gore – Spam use it on the dragon.

Tactics:
Go find the dragon. use charge to stun her then gore + run away, use #4 to make Hemet attack her and lead her to his traps, lead her to Dorian’s Outpost and use charge+gore and run away + make her run into traps until she dies.
Should be easy.
When she’s dead, ride to Dorian and Leave the mammoth
Deliver [Post-partum Aggression] to Dorian Drakestalker.

And there you go Snows of Nothrend achievement Completed.