Colors:
Blue=Quest
Red=Item
Green=Achievement
Winter Veil, its the holiday event in December. Hallows End (Halloween) comes before it in October. The Lunar Festival comes after it in January. Doing all the below achievements gives you the title Merrymaker. Doing ALL of the world event achivement’s rewards you with a Violet Proto-Drake. The achievement’s for this event is not nearly as bad as stuff like Hallows end, which require many, many rare drops and lots of luck. So here we go!

On Metzen: These quests start with the smokeywood pastures goblins in Ironforge or Orgirmmar. You can either rescue this guy in a stable located in Lost rigger Cove (Tanaris). He can also be found in Searing gorge near the Loch Modan entrance.

With a little helper from my Friends: This one was much easier then I expected. You need to get 50 Honorable kills while your transformed into a gnome from the winter wondervolt machines outside of IF,Org, UC, Gadgetzan, and other places. The disguise fades upon death, so you need to be really cautious and stay with the biggest group of your faction to ensure survival. I reccomend this to be done in Battlegrounds, particularly strand of the ancients.

Scrooge (Alliance Version) *Inspected by Professor Earl Z. Mode* You need to throw a Snowball at the Tauren faction leader (Horde), or Dwarf faction leader (Alliance). Buy the snowballs for 5 copper from the smokeywood pastures vendors.

Tis the season One of 3 of the more difficult achievement. You need to eat a fruitcake while wearing full winter garb. You can the fruitcake from the mail after you do the quest treats for great father winter. You need to bake gingerbread cookies(Cooking level one), you need 5 small eggs and 5 holiday spices. Farm the eggs outside of Silvermoon or Westfall. Silvermoon is much better for droprates. Now you need to be able to find a friendly tailor and friendly leatherworker. You need the tailors to make you Green winter clothes(Horde) or Red winter clothes(Alliance). You can get the recipies for the other faction but they are very difficult to acquire. The leather workers need to make Winter boots (Both factions). This gives you two out of three then right? So now you need a red or green winter hat. It does not matter what color hat you have!

The simplest way to get the hat is to do normal Nexus. You simply need to get in, do a couple blue dragonflight pulls, and keep going right. After that you will notice that there is a giant corridor of frozen soldiers of the opposite faction as you. Make sure that you sneak you take the largest space between soldiers as possible! They only unfreeze and agro if you get close to melee range. Now after you get through them there will be a sorceer chick with two of the mage hound things. Kill those, and then you have breathing room. The four mobs lined up facing the wall can be sneaked past. Just face the wall and slowly inch your way across. Now you have four mob pull to the mage herself. This is a tough pull, and if you do it, you should be able to do the boss no problem. The boss then. Burn her down really fast, but try to pop your cooldowns after the first gravity well (It throws you around and damages your a little bit). Then burn down the three adds, frost first, then arcane, then fire. Afterwards she turns normal, burn her down and loot! The hat is a uncommon and drops 100% of the time. I did this with a 75 Restoration Shamman and level 80 Death Knight. It was really easy, and I think it could easily be duo’d by a tank and a healer. We had the Druid stealth past the more stealthy parts because of his lower level.

Crashin’ and Thrashin’ and He Knows if You’ve Been Naughty
Both of these are quite easy. Go to your factions Capitol city (Stormwind or Ironforge). Then find huge tree that great father winter is right next to. Open all of the presents, all of them are quests. When you open the first one you get He knows if You’ve been naughty.

Now the second one takes a tad more time. One of the presents you will get is a Crashin’ Thrashin’ Racer Controller. Right click it and your actionbars are swapped with one that has one button on it. When you use it it rams into another targeted racer. Now you need to hit another one 25 times. You cannot let another person blow up yours, it does not count if you do. Now the easiest way to find another person is just to look around the tree. Plenty of people will be trying to get this thing just like you.

Simply Abomidable So for this you need to recover some stolen treats. Get the quest from the Smokeywood pasture Goblin’s at your Major Capitol. Now head to Arathi highlands, this length of time this takes varies by faction. Its a quick trip for Hordies from Undercity to Tauren mill and longer for alliance going from Southshore. Once there find the yellow ?, its the yellow dot on the map. 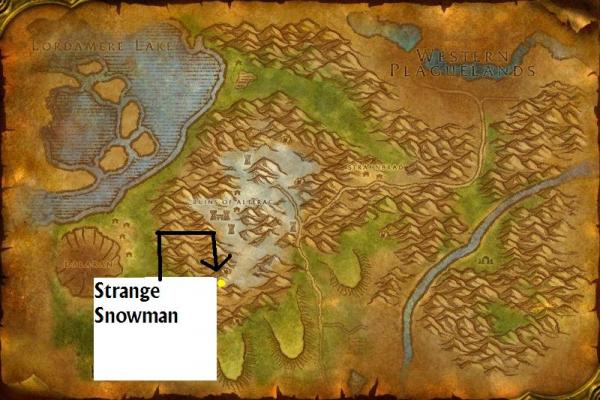 Turn the quest in and get the follow up, then use the following macro to find and tag the Abomidable Grench (Found on Wowhead):
/cleartarget
/tar The A
/stopmacro [noexists] , [dead]
/cast Arcane shot(Rank 1)
/run RaidNotice_AddMessage(RaidBossEmoteFrame,”THERE IT IS! KILL IT!”, ChatTypeInfo[“RAID_WARNING”])
This macro clears your target, targets the greench, but not if he is dead, then casts a spell (Arcane shot in this case) Then in raid warning says THERE IT IS! KILL IT! Its a fun macro, for you non hunters just replace arcane shot with another ability, but be sure to put the rank in too.

A Frosty Shake So after you turn in the quest, around 24 hours after that you get a snowman disguise kit. It requires a snowball that you can buy for 5 copper. You need to /dance with another snowman in Dalaran. Just find another one with the disguise kit and /dance. You can even do this with someone of another faction

The Winter Veil Gourmet: Another of the three more difficult achivements. For this one you need to cook three different recipes. The three are Gingerbread cookie, egg nog, and hot apple Cider. This seems pretty easy, until you realize that you need 325 cooking for the hot apple cider! Luckily a guide requiring no fishing was just put on wow pro! I personally got to 325 by only fishing when I was on a step of a cooking guide where the drops were crappy. I used the wowwiki guide however, instead of the one on this site. Wowwiki guide. Now then everything but the small eggs you require can be found from the smokeywood pastures vendors. The locations of small eggs are described above. All three recipes are bought from the Smokeywood pastures vendors.

Fa-la-la-la-Ogri’la The final of the three most difficult achievement’s of winter veil. You need to complete the quest Bomb Them Again while mounted on a flying reindeer. This means you need A.) A flying mount and B.) The Ogri’la quests unlocked. Most people should have flying mounts at this point, and since this is in Blades Edge mountains, you done even need to have cold weather flying. Start the chain a little east of the ring of blood. You need to kill 5 elite sons of Gruul. This is rather difficult, though people have reported being able to solo most of them. It is impossible to solo the 4th one. You need 3 at the very least to summon him. To summon him you all need to stand in a Pentagram, Pictured below. 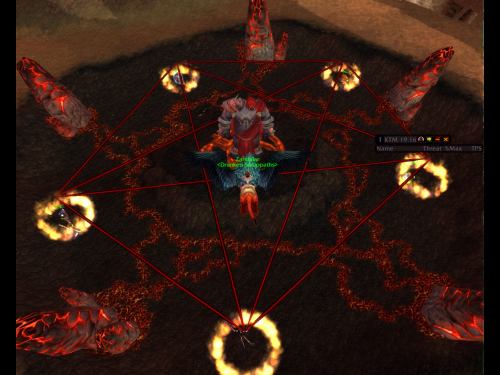 (Image from a Thottbot screenshot)
Now it shows them using five people. However you do not need five, I have done it with four, and some report doing it with three. You see when you stand in the Penagram, and someone else is to, a red beam comes between you and the other person. The more people you have, the more crisscrosy the beam’s are. When you leave one of the circles, the beam of red stays there for a short time. You need to have everyone stand still, except the one or two people who are going to move. Both the people need to be on Epic ground. Once the others are assembled, you need to quickly move to the open circle next to you. If you do it quick enough, then he will be summoned. After killing all five sons of Gruul, you need to go to Ogri’la.

Then find 5 Apexis shards. For some reason these drop the most from etherals and elementals in Bash’ir Landing, which is at the top of the zone. After you find five shards head back in turn in. Don’t get the follow up, get Our Boy Wants To Be A Skyguard Ranger. Find 10 more shards, then go to the Northern Forge camp. Find the evil forge thing, buy one Unstable Flask of the Beast from it. Turn in, and get The Skyguard Outpost. Turn in, get the Bombing run, just drop bombs on the marked objects. Turn in, use some Preserved or Fresh Holly (Get from saving Saving Metzen or a method below) on your flyer, and get the daily bomb them again. Do it as normal, but on the Reindeer. Turn in and you are all set!

Let it SnowYou need to throw a Handful of Snowflakes at a:
Orc Death Knight
Tauren Shaman
Undead Rogue
Gnome Mage
Blood Elf Warlock
Human Warrior
Night Elf Druid
Troll Hunter
Dwarf Paladin
Draenei Priest
This takes ten Handful’s of Snowflakes. You can only get these by targeting a winter reveler’s and /kissing them. You can only do this once per hour per character. Level 30 and above characters usually dont get these, they get some type of Holly. Because of this I think you should get on some of your characters under level 30 near a city. The snowflakes are not Bind on Pickup so you can mail them to your main character easily.

For actually finding these people, all of them that are horde can probably be found in Orgrimmar while the Alliance ones can be found in Stormwind or Ironforge. Now then since you may have trouble getting in to the opposing factions cities, you should go to Dalaran or the battlegrounds. Wintergrasp is also a good option.

Bros. Before Ho Ho Ho’s(Horde) This difficulty of this varies by faction. First of you need mistletoe, you can find it from /kiss on winter revelers (Still). Sadly this is bind on pickup so you need a healthy dose of luck to get it. I think that it comes from some of the other holiday quests as well. The alliance has a great guide to get all of the brothers, get to it by clicking on the link of the achievement above. The horde, on the other hand has a easier time in terms of people, but a harder time in terms of locations. First go to Undercity and find Brother Malach. He is standing near the “Fight Club” in the war quarter. Then take the Zepplin to Orgrimmar, then take the zepplin to Warsong hold. Once there find Durkot Wolfsbrother. He is the stable master of Warsong hold. Then you need to go to a Icecrown airship. You need to be level 77 to fly to the airship, and can’t be summoned to it, but clever Wowhead users have figured out a way anyways. Click on the Horde link, and look at the comments. Note that this brother is a Blood elf, and he patrols around the airship.

Image from Thotbott
On Metzen information from wowinsider
All links from wowhead or wowwiki
Thanks to Wowhead commentors for the awsome macro!