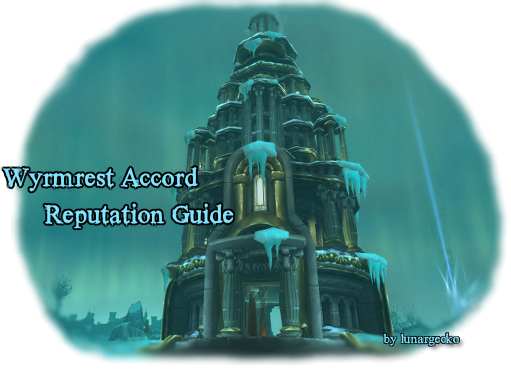 This guide will feature the Wyrmrest Accord. It will include but not be limited to the rewards and reputation gains related to it. The goal is to keep it short, sweet, and informative. Any suggestions and feedback in the form of comments is welcome! I will read all comments and give replies where necessary.

Completing a vast majority of quests contributing reputation to the Wyrmrest Accord can be achieved following Jame’s Leveling Guides for Borean Tundra and Dragonblight. I suggest you have them completed before you proceed any further, as they will easily get you at an honored status.

However, there are still 3 daily quests that may interest you. The following list will describe where they are, how to do them, and their prequisites. Each daily will earn you 250 reputation towards your favorite dragon squad.

Finally, there’s the most effective way of obtaining rep, and that’s running heroics with a tabard on.

Thanks to WoWWiki for the title image… which I cropped and edited a little bit. 😛