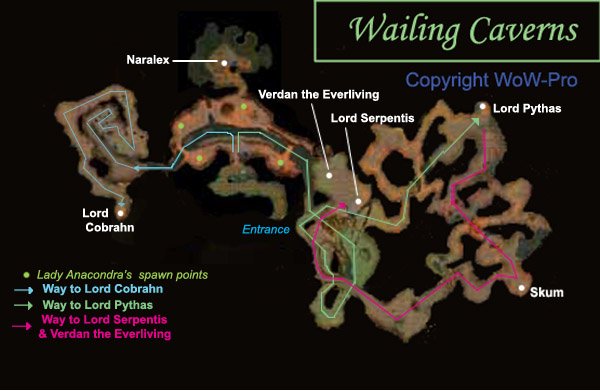 The following guide will show you the optimal way to do Wailing Caverns, how to get to the Boss Mobs, how to complete the quests, and the optimal route to follow. I suggest you read the whole guide before getting started, I tried to make it as short as possible and every info given is needed if you are new to Wailing Caverns.

Do not bother going to Wailing Caverns unless your group is level 20 on average. The last two bosses (the only ones that are hard), are lvl 22-24. So you better be lvl 20, or they will be Orange/Red to you, and you will have a hard time.

Wailing caverns is located Southwest of the Crossroads in The Barrens. The entrance is right next to the Northern part of the Oasis. You will first enter the non-instanced part of it when you walk into the cavern. The way to the instance portal is the following:

At first Fork, go left, you will reach some water and then the 2Nd fork, go straight, then you will have to swip through a little pool, and then you will reach a big room, follow the path to the right (careful there is a hole, even though it’s not really dangerous) until you reach the portal.

Quests to Get Before Entering the Instance:

Quests to Get Inside the Instance:

All these quests are easy to do if you plan to finish the main quest: Leader of the Fang, since it requires you to go through the whole instance, you will most likely finish all the other quests on the way. Besides [18] Troubles at the dock, which requires you to find an npc that is in the Wailing caverns but OUTSIDE of the instance. I will explain below every quests in detail now.

This quest is different since it’s the only one happening outside of the Instance. If you are not a big fan of quests, skip this one, the mob is sometimes hard to find, and the reward is only 1350 xp and 10 Silver. If you care though, here is the info: You must find a Npc named Mad Magglish, and he is ‘Invis’, but appears when you get close to him. He can be at two different spots.
When you enter the cavern, you will reach a fork, do not go left towards the water, this is the way towards the instance, go straight until you reach a drop off, jump down, the npc is on your right, in the corner. If he is not there: From the cavern entrance, take left at first fork, you will reach a pool of water, go left. Go till the end of this tunnel and you will find him there.
He is not always there since other people kill him too and he seems to be on a weird respawn timer. So once again, if he’s not there, don’t bother, you can still come back every now and then and check on him.

These are given by the NPCs in the secret cave above Wailing Caverns’ entrance. To get there you have to climb the mountain first, then jump down right over the top of Wailing caverns’ entrance, and drop down again on the lower rocks, turn around and you will see little holes, that’s the entrance to the secret cave. Those quests are worth it, and they are easy to do, Deviate Hides drop from any deviate type. So you’ll get them done on the way to bosses.

Serpentsbloom can be gathered from the floor, just like any flower you gather with herbalism. Just check carefully when running through the instance, and you will find them. If you don’t, you can still find a lot of them in the non-instanced part of Wailing Caverns.

Pre-requisite for this quest is Raptor Horns, from the same npc. You have to gather 5 Intact Raptor Horns from Sunscale Scytheclaws, and bring them to Mebok Mizzyrix in Ratchet. Then you get Smart Drinks.
Wailing Essence drops from Ectoplasms, inside and outside of the instance. It’s easy to do, you will get them on your way to the bosses.

This is the big and most important quest, and the rewards are great.

Follow the map routes and the directions I will give below, and you will go through this whole instance in record time. This quest has pre-requisites, it is at the end of a long serie of quest given by Tonga Runetotem at the Crossroads, do all of her quests, and then she will send you to Mura Runetotem, you can find Mura at the Sepulcher, in Silverspine forest (take a zepelin from Orgrimmar to Undericty, get out of undercity and follow the road to the west and then southwest through Silverspine Forest, after a while you will get to a fork, go west, sepulcher is that way). Mura will then send you back to Thunderbluff, where you will meet Arch Druid Hamuul Runetotem (he is in the big tent on the elder rise), he will send you to talk to Nara Wildmane, who is on the Elder rise as well. It’s tedious, but it’s worth it.

After entering the instance:

A few general rules:
There are many humanoids in the Wailing caverns. If you have a mage, he can cast Polymorph on them, making them unable to do anything while they turned into a sheep.
A rogue can also ‘Sap’ a humanoid target, once per fight, before the mobs are aggro on your group. A lvl 20+ warlock with Succubus pet can also Seduce humanoids. Use those abilities, they make your group much more efficient when you have to deal with several mobs at the same time.
Note: Doing any damage to a Polymorphed or Sapped target, awakes it. So make sure that everyone in the group uses /assist on the same person. (see Ragefire Chasm guide for group basics if need be)
There is also many beast types in the wailing caverns. A druid can cast Hibernate on those, putting them to sleep makes them unable to fight for the duration of the spell. (mages can Polymorph beasts as well)
Same rules apply as with the previous spells.
Druids of the fang are numberous in this cavern as well, and they are annoying for two reasons:

1. They heal themselves when they get low on hit points, interrupt them as much as you can. Warriors can shield bash, Rogues can kick / gouge, Shamans can earth shock, etc.
2. They will put a member of your group to sleep usually. This can get dangerous, at this level your only ways to counter it is to have a priest cast Dispel Magic on the Sleeped target or have a shaman cast a Tremor Totem. (later on warlocks can do the same with their Felhunter pet)

With that in mind, let’s start clearing this instance!

He is not necessary for the quests but he can drop good items: 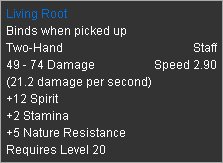 And he is in your way because there is a shortcut to the river behind him.
Be warned, he hits VERY hard for this level. About 300 Dmg per hit on average, on a warrior. So if you have a warrior in the group using shield/Defensive stance, then use him and make sure you let him take all the hits.

Make sure Everyone in your group is ready when you start the quest, because the Disciple will walk towards the room of Naralex, and you will have to escort him. He will spawn mobs in the first Circle on the left, and then proceed to Naralex’s chamber.

He will then start performing the ritual and waves of monsters will come from the waters surrounding the chamber. The first two waves are easy, it’s just a bunch of mobs trying to kill the Disciple, they are not elite, so just kill them fast and taunt them off the Disciple. If he dies you lose.

After those two waves, Multanous the Devourer will come. If you managed to kill Verdan you should be ok with him. He’s pretty much a melee type mob, hits hard, has lots of Hit points. He drops really good items for this level.

And can also drop a Glowing Shard, which can be looted by the whole group. This Shard needs to be Right-Clicked to start the quest. You can zone out of Wailing caverns, use a hearthstone or fight your way out, its up to you.

Go to Ratchet and talk to Sputtervalve, he will give you a clue about the Shard, and send you to Falla Sagewind, a NPC living on the very top of the mountain next to Wailing Caverns, the same one you climbed before to get to the secret cave. She will send you to Arch Druid Hamuul Runetotem in Thunderbluff – Elder Rise, who will reward you.

Hope you enjoyed this guide, and if there is anything missing in it, please let me know, and I will do my best to complete it.