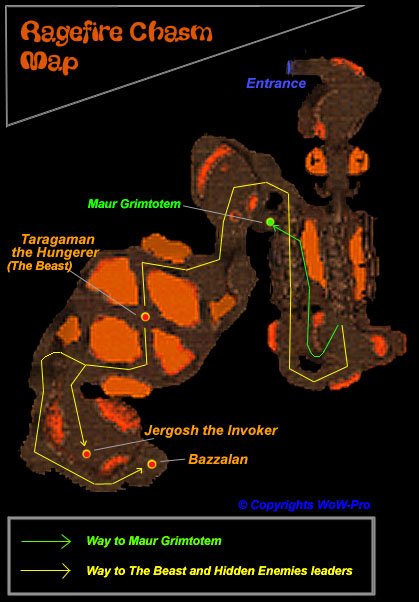 Ragefire Chasm is the first instance for the Horde. It is pretty basic and should give you an idea on how instances work.

The Entrance to RFC (RageFire Chasm) is located inside Orgrimmar itself, in the Cleft of Shadow area. You can’t miss it, it’s a big swirling blue portal.

The following paragraphs (Group composition and Basics) were written to help out people who aren’t familiar with group mechanics in World of Warcraft. So if you think this doesn’t concern you, skip that part and go straight to the Walkthrough.

1. The Tank: Try to get a warrior, if you can’t find one, take a shaman. They can keep aggro fairly well, they just don’t take hits as good as warrior, but they can heal and have totems.
This person will be your puller. It’s important that the tank gets the initial aggro on every pulls, makes things easier.

2. The Healer: No explanation needed here. You need someone to heal the party. Get a priest or a druid, they can both do the job fine.

3. Crowd Control: Crowd control is abilities and spells that help dealing with multiple mobs type pulls. (Exemple: Your warrior shoots an arrow at a Ragefire Trogg, and 3 mobs come for your group. Instead of fighting all three mobs at the same time and get much more damage and risk a death. You can use crowd control spells such as Polymorph, or Sap, and reduce the amount of mobs attacking you at the same time, and deal with them one by one)
So, get a Mage or a Rogue, or both if you are lucky. There are a lot of humanoids in Ragefire Chasm, and Rogue/Mage can crowd control those.

Note: Rogue’s Sap need to be applied before the mobs are in combat mode. After sap is applied, the rogue will get attacked by the mobs close to the sapped one, so the warrior will have to quickly taunt them back to him, demoralizing Shout works well for that. (if the tank is a shaman, a quick heal on the rogue will do the job as well).
If you have both mage and rogue in the group, send the rogue to sap first, then if there is still more than one aggro mob to deal with, the mage can cast Polymorph on one of those. This changes a hard pull where you must deal with 3 elite mobs at the same time, into an easy 1 by 1 mob fight. When your first mob is dead, go for the one that was sapped, keep the sheep for last, because Polymorph can be re applied several times, and therefore lasts longer than Sap.

4. Damage Dealing: Killing monsters fast = good. So get classes with high DPS (Damage per second), such as Hunter, Rogue, Mage, Warlock. Avoid having a second warrior for exemple, they don’t stack well. In short, once you have your base setup for your group (Tank,Heal,Crowd Control), fill the rest up with DPS classes.

Pulling: Pulling > Rushing. You should always let your tank pull, and never rush into camps of mobs. It is bad, because in most case, by rushing a camp of mob, you increase the risk of getting adds. The way to go in instances is to let ONE person (the tank preferably) pull the mobs (with a ranged attack), and to run them back to the group.

Note: Exeption to that is Rogue Sap. When rogue saps it will get attacked by mobs that are around. But it’s still the same, the rogue will run the mobs back to the group.

FAQ: I’m trying to pull this stupid Ragefire Shaman to my group but he’s just standing there and nuking me. What can I do?

A good group needs to have a person they assist.

Decide beforehand who is gonna be your group’s assist, choose someone who is not likely to change targets often. (warriors change target often, when they need to taunt adds, classes doing crowd control need to switch targets as well, so don’t assist those). Choose a class such as rogue, or hunter… Anyway. Choose someone for the job.

Let’s say your group has a rogue, let’s name that rogue ‘timmy’.

Timmy will be your main assist, he will pick the targets on every pull, and everyone must hit the same.

There is several ways to assist a person:

– Target Timmy, and use your Assist key (check key bindings)

Put the macro somewhere handy on your hotkey bars, and before hitting anything, use that macro to aquire your target.

That way, you can be sure you will be hitting the right mob. Your group will be already much more efficient if everybody follow those basics.

Healing: Let’s say your group has a Priest AND a Shaman. The priest will be handling the heals, but imagine you get a heavy pull, and the Priest is getting beaten up. The instant reflex a shaman (or any other healing able class) should have, is to heal the Priest. A priest under attack is getting interrupted in his heals, and on top, if a priest heals while being attacked, he will just generate more aggro, making it harder to get the mobs off him.

Another situation, let’s say you are encountering a monster that hits pretty hard, and you see that the priest is having a hard time, the health of your tank is dangerously going down between every heals. Help out the priest and toss a backup heal on the tank. Learn how to time those backup heals so they are actually useful and not a waste of mana. And you will save your group many times.

Analyze your group setup and try to get the best out of it for every situation. You have a warlock, or a hunter, but you don’t have mage or rogue, and therefore lacking crowd control. Well, a warlock’s voidwalker pet or a hunter pet can ‘Offtank’ an add while your warrior is tanking another, this takes a huge burden off the healer’s shoulders. It is a form of crowd control.

Monsters are cowards and they like to run and bring friends. 2 things:

Lava hurts, yes yes, this might sound stupid, but I’ve seen people jump into the lava and die in 3 seconds, go ‘wtf!’, and then when asked why did they jump into the lava would answer ”wanted to check how much lava hurts in this game =D”

The answer is: a LOT. So now you don’t have to see for yourself, thanks to the geniuses I grouped with 😛

After entering the instance, there is only one way to go, for a quite a while, until you see the beginning of the two routes on map actually. Until you reach that fork, the pulls are pretty standard, mostly solo, sometimes two mobs per pull. Feel free to try out the group basics for Assisting and Crowd Control on the way.

When you reach the fork, you will have your first real pulls (3+ mobs per pull), so now is the time to apply everything you read above on group mechanics.

To Maur Grimtotem:
(skip this paragraph if you already did this quest)

Take the first path on your right (following green route), and clear your way up until you reach a little cavern. On the floor will be lying Maur Grimtotem, but before you talk to him, look in the back of this cave, there is a named elite, Oggleflint, kill it first. Nothing special about this named, he’s easy. When that is done, talk to Maur Grimtotem to complete the quest. When you are done, go back where you came from to the big room and take the Yellow route, towards the Leaders of the Searing Blade.

Before reaching Taragaman you will reach a large area, which is made of bridges interlacing with each others, over lava. This is when you will start seeing Searing Blade members, which are mostly orcs.

At this point, you must really start pulling carefully, and using your group efficiency at best, because pulls are now getting heavy. On top of that, there are a few patrols roaming in between mob camps. So watch out for those. After clearing the way, you will meet Taragaman, aka the Beast. Get full HP/MANA before engaging him, he is kinda tough.

He hits hard, can take a beating, and has an AE (Area Effect) ability. So, if you are a caster or a ranged attacker, you better stay as far as possible from the fight, do not go melee. Taragaman also has a Knockback ability, which tosses you into the air and backward. So be careful if you are the tank, do not fight him with your back facing the lava, or he might toss you into it, and try keeping Taragaman away from casters.

Get back on the Yellow route, to the final two bosses.

Follow the Yellow route until you reach the fork (see map). From here on you can decide if you want to go for Bazzalan or Jergosh first. It’s up to you. If you managed to Kill Taragaman, you shouldn’t have a problem killing those last two bosses. The only difference is that they have guards. So use sap and polymorph on them and kill the boss first, quickly. If you don’t have either, you can use Warlock pet or Hunter pet to offtank an add, and kill the other add quickly while the warrior is tanking the named. Just make sure everybody follows the same plan, and attacks the same target for maxium efficiency.
Jergosh the Invoker almost always drops a decent green item, in spite of Bazzalan, who rarely drops anything of value.
Once they are both dead, you can either use Hearthstone or clear your way back to the entrance, it’s up to you.
Congratulations on finishing your first instance, now is the time to go turn in your quests and get your well earned rewards!

I hope you enjoyed this guide through Ragefire Chasm, if there is anything worth mentioning I forgot, please let me know, and I will update it asap. Thanks! 😉