Chapter I: The Library 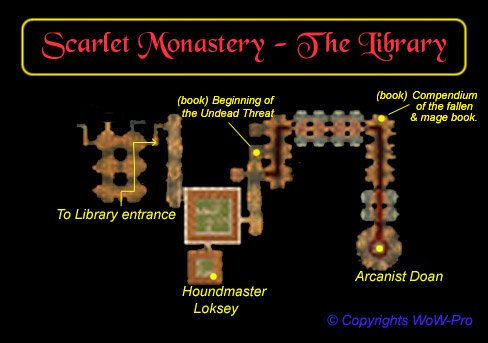 Scarlet Monastery is many people’s favorite instance. You will get to love it yourself too. One of the reasons people love it is because it is divided in 4 Mini instances instead a single big one. The advantages of that feature are numerous. The 4 mini-instances of Scarlet Monastery are The Graveyard, The Library, The Armory and The Chapel..

I will cover the graveyard instance shortly here (because there isn’t much to say about it), and then move on to the first important part of the instance, The Library. (see map above).

How to get to SM

Scarlet Monastery is located in the Northeastern part of Tirisfal Glades.
After going up a long corridor you will be in a large room with pillars in the middle, filled with scarlet denizens all around. Clear your way to the opposite side of this hall, and you will reach the 4 entrances to the instance. The two middle doors are locked, they give access to the Armory and The chapel, you can’t access them yet. The blue portal on the left gives access to the Graveyard, the blue portal on the right gives access to the Library.

The Graveyard part of the instance is through the Left blue portal, as explained above. It is totally optional. If you go there and clear the first corrider to the first room, you will be in a torture room, and an easy mini-boss will be there, he doesn’t drop anything worth it, but there is also a tortured prisoner there, who gives you a quest:

If you go to the end of the graveyard you will kill an easy named who drops blue loot sometimes, but really not worth it compared to what you can get in the other part of the instance. On the other hand, this part is easy and can be done by a low 30ish group.

Now on to the interesting stuff, to the library! Enter the blue portal to the right.

Group composition: lvl 35+ basic party. You need a tank, a healer (priest/druid), some crowd control against humanoid (Rogue / Mage / Warlock) and anything else.

The only real danger of this instance:

Runners. Every single mob (besides the hounds) in this instance runs away in fear when getting low on health. This is almost the only reason why parties can wipe there. So two things:

The first corridor is a mix of Scarlet Gallants, Scarlet Adepts (priest type, so be ready to interupt their heals), and Scarlet Beastmasters (+Hound pet).

It’s easy if you follow the rules above. After clearing first corridor you will reach the Huntsman’s Cloister. Clear it entirely, then go south to the room where Houndmaster Loksey awaits you.

Houndmaster Loksey deals quite a lot of damage for his level, so if your party is rather 35- than 35+, I suggest you take this fight seriously.
He is guarded by 3 hounds, which don’t do nearly as much damage as Loksey does. If you have a druid, put one dog to sleep, if you have mage, sheep one, as for the last one it’s up to you. Send the warlock or hunter pet on it, or even, ask the warlock to cast fear the whole fight. (if you cleared the previous room entirely, there’s no risk in doing that)

Kill Loksey first, and then finish the easy dogs. Congratulations, you just finished 1/4 of the main quest.

Get moving fast though, because respawn rate is quite fast in Scarlet Monastery.

On the way toward the final boss of this part of the instance, you will meet new mobs, a bit higher in level than the rest: Scarlet Chaplain (priest type), Scarlet Monk (deals high melee damage, but low defense), Scarlet Diviner (casts fireball a lot, interrupt it).
You will finally reach the Athenaeum, where you will find the books you need to complete the Test of lore and Compendium of the fallen (Horde) and Mythology of the Titans (Alliance) as well as the mage quest Rituals of Power. Check the shelves at the spot shown on map. Also, if you have the quest Test of Lore, you will have to clear one of the little side rooms before reaching the Athenaeum, the book is on a table inside of it. (see map)

At the end of the library, you will find Arcanist Doan(lvl 37 Elite), he casts the following spells:

He is Immune to Stun, Silence, Shield bash, etc. But he is a caster and therefore doesn’t have much Hitpoints, even though he is a boss.

He can drop one of the following items: 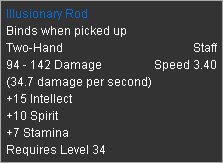 As well as the Mantle of Doan or the Robe of Doan, so-so green items.

In the back of Arcanist Doan’s room, you will find a treasure box on the floor, open it, and you will aquire the key to the 2 last instance parts of the Scarlet Monastery. 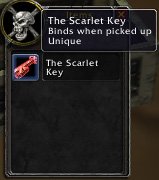 Now on to the next step, the Armory. 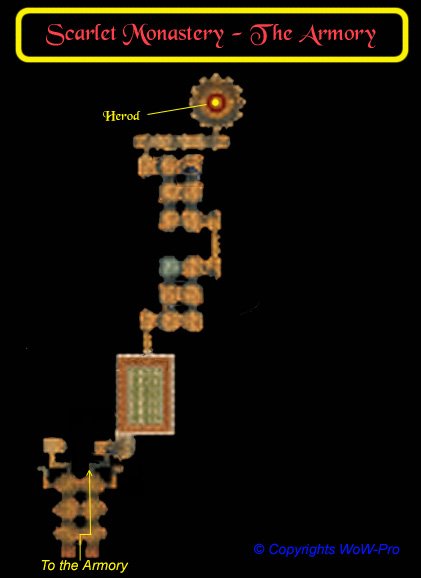 So you just entered the Armory. Now things get a bit more tough. First off, mobs are a bit higher level (highest being lvl 40, Herod himself). So I recommend your group is majorly lvl 36+
Secondly, most pulls are gonna be two or three mobs at a time. And there is also a few patrols, and of course, mobs have that annoying tendency to run away in fear. Things can get ugly quickly.

At the end of the armory is a big circle room, where Herod awaits his challengers. 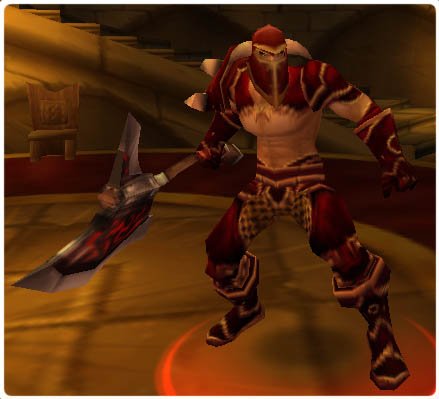 Herod is tough, looks cool, and is a fun fight.
He hits pretty hard, and has a load of HPs. And some nasty abilities:

Congratulations, you cleared the Armory, and got your main quest 2/4 completed. Now only Scarlet Commander Mograine and High Inquisitor Whitemane are left on your kill list.

Herod can drop the following items: 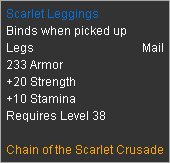 Prepare for the last part of the instance now, The Chapel. 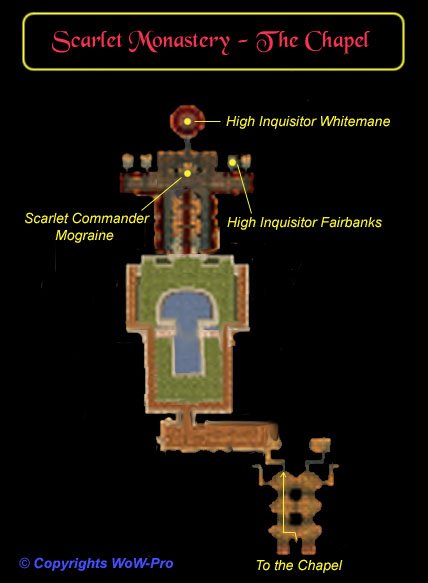 I would recommend your group having an average of lvl 40+ for this last part of the instance. Simply because the last fight includes fighting Mograine and Whitemane at the same time. And they are both boss mobs, and both lvl 42 Elite. If you are lvl 39 or lower, they will be Orange to you, you will hit them less often, less hard. They will hit you more and harder. This is why lvl 40 or higher is a big advantage here.

On Your Way to The Chapel

You will first have to go through a garden with a pool in the middle. The fastest way through it seems to be clearing a straight path to the pool, then move your whole group there. Then when your whole group is safely sitting in the middle of the pool, you can start pulling either left or right, towards the stairs to the upper level of the gardens.

Once you have cleared a path safe enough to move up, tell your group to do so, and establish your new camp on the upper level pool, right next to the fountain. It’s safe spot, nothing aggros there.

Now start pulling towards the Chapel’s gate. Pull the mobs carefully, there are lots of roamers here, and fight them inside the pool, in the middle of it.

Warning: Be extremely careful with runners here, as you don’t have much room for mistakes.

Once the path to the gate is open, call your group to move up the stairs, but don’t move inside the chapel yet.

You will first clear the beginning of the Chapel by pulling it outside, to the stairs. When you feel that you have cleared enough inside so it is safe enough to move in, do so.

At the end of the chapel is Scarlet Commander Mograine. There is one thing you need to know about him before you go further: when you attack Mograine, he calls for help, and the WHOLE Chapel will come to his aid. So before you aggro Commander mograine, clear EVERYTHING that is inside the chapel, including the back rooms to the side. Check every little corner before you attack him, because the next fight is quite something.

Engage Mograine when your group is fully ready, and warn them about a few things:

Congratulations for overcoming this battle. 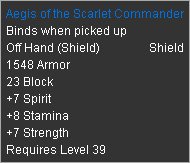 He can as well drop the Scarlet Leggings, the same ones Herod drops.

You are done with the main quest now, but before leaving the instance, go to the little side room on the right, there is a torch in a corner, which is actually a switch to a secret room. Inside this room is High Inquisitor Fairbanks, which turns out to be an Undead (so much about Holy crusade), he is sleeping but will wake up if you get very close.

Anyway, he is an easy boss, casts sleep and curse of blood (physical damage taken increased), and powerword:shield.

He drops 3 top of the line random green items.

Also, before leaving the Chapel, check out the circle room where Whitemane was before she came to attack you. There is a treasure chest there most of the time.

Now is the time for you to go and turn in your main quest, and enjoy the rewards, which are totally great for this level. 🙂

I hope you enjoyed this guide through the Scarlet Monastery!