I do not take credit for writing this it was posted at the European forums first, I did ask the poster if I could copy it and he said it was ok. I can´t link to the post as it is deleted. Although, I have added some stuffs myself. 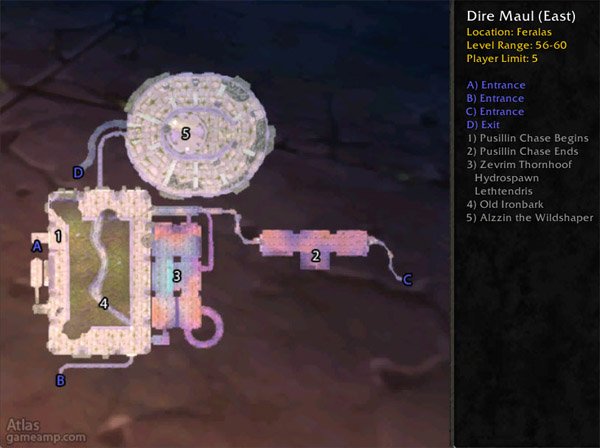 The Madness Within
The Treasure of the Shen’dralar

The Emerald Dream – Druid
The Greatest Race of Hunters – Hunter
The Arcanist’s Cookbook – Mage
Garona – A Study on Stealth and Treachery – Rogue
The Light and How to Swing It – Paladin
Holy Bologna – What the Light Won’t Tell You – Priest
Frost Shock And You – Shaman
Harnessing Shadows – Warlock
Codex of Defense – Warrior
Foror’s Compendium of Dragon Slaying – Warrior, Paladin

The east wing of Dire Maul is challenging, but still the easiest of the three wings, and the area you’ll need to do first to get the key to the north and west wings. There are also a number of quests and bosses spread throughout the East wing, capable of giving up some nice loot, which makes it worth running through more than once.

1. The entrance to Dire Maul East can be found, unsurprisingly, to the right of the large pit in the Broken Commons. Zone in.

2. The opening area of Dire Maul East is known as the Warpwood Quarter. There’s a large pit in front of you (down below is The Conservatory, which you’ll get to soon enough), and a path that winds counterclockwise to the right. For the most part, you’ll run into a mix of plant and tree-like creatures – Warpwood Tanglers, Treants, Lashers, and towering Warpwood Crushers.

3. As you round the first corner, you’ll see a small little imp named Pusillin. This is the NPC for the quest “Pusillin and the Elder Azj’Tordin,” and he also gives up the Crescent Key that opens Dire Maul North and West… when he’s good and ready. You’ll have chase him further into the instance before he’ll give up the goods, however.

4. The group continues clearing until they reach the northeast corner of the Warpwood Corner. From here, it’s possible to go left and north, but many groups will skip that area completely. To continue your chase with Pusillin, you’ll need to go right into a narrow hallway, called The Hidden Reach.

5. Partway down the hallway, you’ll have the choice of continuing straight or making a right. To continue chasing Pusillin, you need to continue forward. (You’ll be back to the room on the right soon enough.)

6. As you go down the hallway, you’ll run into some stealthed patrols; these can cause real problems if your group isn’t alert for them. As you emerge into the next room, the group will dispatch of a few groups and bear to the right, where there’s a small ramp leading up to a small platform, where Pusillin waits for you.

7. This time, when you talk to Pusillin, he spawns a number of Wildspawn Imps and transforms himself into a nasty demon. If you have a mage on hand, it’s easy to dispose of the imps while everyone else pounds Pusillin. When he’s dead, he drops the Book of Incantations needed for his quest, as well as the Crescent Key for anyone who needs it.

8. At this point, most groups will turn around and backtrack to the room you passed a few minutes ago. There are a lot of mobs here, but if you stick to the left wall, you can skip most of them. At the rear of the room is a large ramp leading upward to the mage Lethtendris, who is the target of the quest “Lethtendris’ Web.”

9. The fight with Lethtendris is pretty simple; the warrior tanks her for a few seconds while everyone else beats up her minion, then jumps on her. Once she’s down, she drops the needed quest item, and everyone moves back down to the bottom of the ramp.

10. At the base of the ramp, there’s a curved hallway that leads further downstairs. There are a few groups of mobs to clear at the bottom, and then you’ll find the boss Hydrospawn waiting in the center in a small shallow pool. Aside from dropping some extra loot, he’s also the objective of the mage quest “Arcane Refreshment.”

11. After Hydrospawn, the group hugs the right wall and continues north through the far doorway, and takes the hallway that leads to a small platform upstairs. Here, you’ll find a Wildspawn Hellcaller protected by a few non-elite mobs, and then the boss Zevrim Thornhoof.

12. The fight with Thornhoof isn’t bad, except that he might occasionally teleport someone onto the altar and begin whooping on them. When the fight is done, you’ll hear Old Ironbark — the huge tree in the Conservatory — yell “At last! Freed from this cursed grasp!” You’re now ready for the final stretch of the instance.

13. Instead of backtracking downstairs, the group can run to the southwest corner of Thornhoof’s platform and jump down, which should put you right back at Hydrospawn’s pool. Avoid the groups and take the door to the southwest, which leads to The Conservatory.

13. Your goal in the Conservatory is a door at the very north. To open it, someone will have to talk to Old Ironbark, who will then rampage and bust the door down. It’s possible to fight your way to the door, but that involves fighting a lot of patrols, and it’s also possible to hug the east wall and sneak to the door, only fighting a few single mobs here and there.

14. The final battle of Dire Maul East takes place in the Shrine of Eldre’Thalas, where there are a few Warpwood Crushers guarding the upper areas, and then a central area down below where Alzzin the Wildshaper awaits. It’s a pretty straightforward fight – he shapeshifts a few times, and then a bunch of non-elite minions come running out to assist, which can easily be dispatched of with a mage.

15. Once the fight is over, you’ll see a few glowing shards on the ground near Alzzin’s camp. These are for the quest “Shards of the Felvine.” Pick up one of the shards and exit via the tunnel behind the camp, which deposits you in the central area of Dire Maul.