This instance is one of my favorite instances in Wrath of the lich King. Not only of the good drops, fast and easy, but most of all the awesome storyline. It can be a little hard to understand what to do when you get into the instance, that’s why I’ve written this guide.
First of all, go to Caverns of time. It is located in Tanaris in Azeroth. You dont need the required quest too enter like the other ones. The easist way to get there is through the portal in Violet Citadel in Dalaran City.

THE INSTANCE
– I’m briefly going to explain where to find the bosses, and the easist way through the instance.

When you are inside the instance, Arthas will stop running and then it’s up to you. Keep running from froms right to left until you’re running into a wave of mobs, kill them (if you have trouble finding the place where the mobs is spawning, look at the white flag on your minimap). Then run back to right. At wave 5, Meathook will spawn instead of a normal wave. 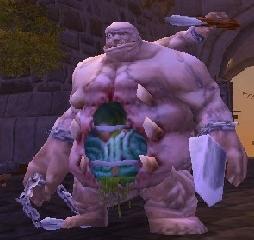 MEATHOOK
This boss is not any hard fight, really. We will go on with “Tank ‘n’ Spank”, means, that we just fight him to death with no strategy. Meathook will cast the folling spells:

The group are gonna watch out for the chains/expulsions, if they hit the healer, it can be critical for the tank. The tank may die because he/she won’t get healed for four seconds (you may escape with PvP trinkets or other spells that let you escape from stuns). So the healer is gonna make sure that the tank the tank is topped off. The tank + healer must be prepared to use cooldowns when the Meathook goes into a frenzy which will increase his damage by 50%.

SALRAMM THE FLESHCRAFTER
At wave ten, this boss will spawn instead of a normal wave. Like Meathook, Tank ‘n’ Spank is the way to go, this one is just easier. He got the following spells:

Curse of Twisted Flesh won’t be any problem to most heaers, they just gonna keeptracking on the one that is hit. When Salramm casts Steal Flesh, it can be critical if the healer is not focusing on healing max up the tank, as he/she will take very much damage. Neither Shadow Bolts will not hit for much, and can be reflect by a warrior tank.

When you’re done killing all the waves, go to the north were you will find Arthas. Talk to him (accept his question when you right click) and follow him inside the house next to him. Some of the citzens inside the house will be transformed into dragonkins, and you’ll have to kill them. Finally, when you’ve fighted you upstairs and trough the house, the third boss will spawn. 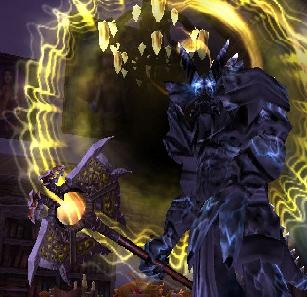 CHRONO-LORD EPOCH
Chrono-lord Epich is like the other bosses. Ofcourse he have some different spells:

Nothing special to worry abput in this fight, really (maybe Wounding Strike). Should be down in a few minutes by most groups.
When you’re done with the boss, go click the bookshelfs behind him to get to the last part of the instance. Run down the stairs, and outside the house. If you’re trying to do it timed (25 min), you’ll have to speed up, and this part is a good place to do that. Let your tank run in the front pulling everything that attacks you, make sure the healer can heal it up.

MAL’GANIS
Continue Through the burning street untill you reach “King’s Square”. If you’re doing it timed, don’t go directly to Mal’Ganis, but run to the left, and you’ll find Infinite Corruptor which is the extra boss that only exist on timed, that you’ll have to kill if you wanna reach timed. The extra boss got nothing special, kill it as fast as possible.The strategy for Mal’Ganis is… guess what? Tank ‘n’ Spank! Here is the spells:

Fairly easy fight, keep on tanking, healing and DPSing untill he is dead. Loot the chest and congratiolations with the epic drop! 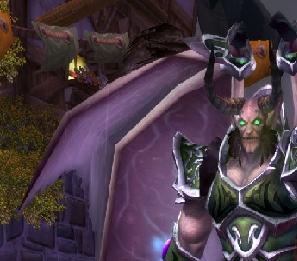