Forge of Souls is a beautiful linear dungeon that provides players the opportunity to see the beginnings of the deranged Icecrown Citadel stronghold. Players entering this dungeon have to be level 80 to use the dungeon finder tool and have obtained a decent set of gear. Players level 75+ can enter the normal mode dungeon with a premade group; however; unless being carried by strong team mates, level 79 is the suggested minimum.

TANK: Warrior, Paladin or DK with good mitigation an about 30000+ hp

HEALER: Competent healer in I213 gear+

The Forge of Souls 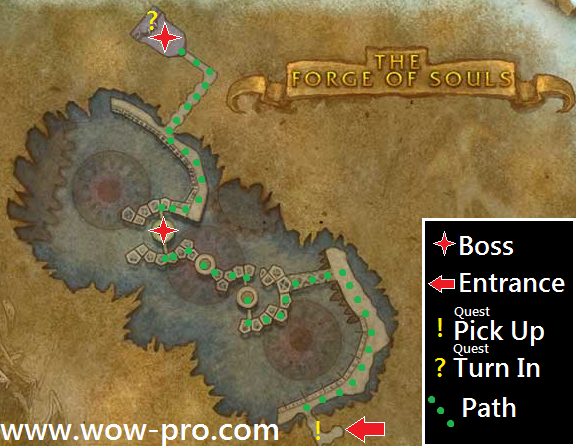 These guys pack a modest 132,300hp in heroic. With a good tank and vigilant healer these are straight forward tank and spank style mobs. Casters will want to pay close attention to Shroud of Runes as they can easily blow themselves up if not paying attention.

These mobs will appear twice before the first boss and once after.

The following mobs will appear in groups of five about a handful of times before the first boss.

This mob should be your targe’s first to kill. They have a very strong heal and can dish out some modest damage as well as summon additional help. At 105840hp this mob should attract your team’s focused fire.

Abilities:
Raise Dead
Shadow Bolt
Soul Sickness
Soul Siphon
These guys pack a healthy 132300hp. Although not as bothersome as the Adept, this mob should be one of the higher priorities to kill. I would suggest killing this mob after the adept, as they can inhibit a spell caster for 5seconds (including healers) as well as apply debuffs on the tank (reduced aggro generation) and of course DPS. This mob can also summon a minion into the mix.

Abilities:
Bone Volley
Raise Dead
Shield of Bones
This mob also has 132300hp. In a heavy melee group, this mob is potentially tricky, though nothing an observant healer can’t easily handle. This mob does summon, but should be killed after the Animator.

Abilites:
Frost Nova
Shadow Lance
Like his friends, this guy has 132300hp. He is a spell caster and can cause noteable damage, but nothing beyond what an average healer can cope with. This mob can not heal or summon so kill this guy next.

These guys are slippery and will randomly select a party member to sneak up on and perform Soul Strike. They have 94,500hp and provided you have atleast an average healer, are low on the list of priorities to kill as once they have applied their strike, they return to the top of it’s aggro table.

Every once in a while you may receive a visit from a Spireful Apparition. These mobs are very sneaky and similar in their behavior to the mobs in Crypts (Burning Crusade) They do make explodies near a party member for about 7000-9000 damage. Most groups will ignore these mobs, but can be seen using Detect Invisibility spells or Elixirs. At 15,000 hp, it’s common just to let these mobs do their business and heal the victim.

Bronjahm is well worth fighting with game music and sounds activated, even if only for your first time. This is one of the less subtle salutes to pop cuture that WoW has done, including items in his loot table which are a hats off to legend James Brown, Godfather of Soul.

Bronjahm is a 2 phase encounter which should be relatively easy for your group to kill. Your biggest obligation as a group is firstly positioning, and secondly, switching targets. For the first 80% of Bronjahm’s 903,227hp, your tank and mdps is going to want to pull the boss to the back of the room, rdps and heals will position close to max distance the other side of the room. You will then begin the burn process. The boss will occasionally cast his Corrupt Soul. “Bronjahm emotes “I will sever the soul from your body!” before he casts Corrupt Soul, so if you can’t see a beam going towards ranged, melee can and should move away for a second’ – kayeich This beam will spawn a Corrupted Soul Fragment with 56,700hp at the position of any player. Should this be a melee or poorly positioned range player, the tank will then want to kite the boss away from this fragment. DPS will then want to kill this fragment (if not doing the achievement) before it reached the boss, or he will heal for a considerable amount. Repeat this process as needed until phase two.

At 20% health, Bronjahm will Teleport to the center of the room and cast Soulstorm occasionally targeting someone with a Fear. Bronjahm will no longer cast Corrupt Soul, so everyone needs to clump in the middle; should you be feared it is your priority to return to 10yards of the boss as soon as you can.. Simply burn the boss to 0hp at this point and collect his loot!

More Mobs
After defeating the boss you will run into a pair of Watchmen, go ahead and kill these as you did the others.

This mobs have 264600hp and are pretty simple to kill when pulled by themselves. The healer has the biggest responsibility here as the mob causes AOE damage and reduces healing. So, focus fire them down, and try to avoid multiple pulls. “Spectral Warden’s healing debuff -can- be interrupted. My DK regularly mind freezes the “veil of shadow” spell, so it’s not all on the healer. Every bit helps!” – Kayeich

“For Devourer of Souls, nothing causes a wipe like people continuing to DPS through Mirrored Soul. If it looks like a wipe and you have someone that can rez still alive, you -can- reset DoS by running down the corridor. He’ll despawn after a while, think he goes as far as the turn of the corridor, although he’ll usually despawn at the foot of the stairs” – Kayeich

In stark contrast to the last boss, turn your game sounds down, unless you like greatly over acted dialogue.

The boss has 903227hp. It regularly casts Phantom Blast on the tank, this cast can and should be broken where possible. Occasionally the boss will use Mirrored Soul; when active, any damage dealt to the boss will be transfer damage to the player who shares the mirror. If this happens, stop attacking, or your team will likely reduce in numbers. Usually after this it will cas Well of Souls, and that is a purple “voidzone” and the one golden rule of wow is… “Voidzones don’t give buffs”. Then there is Unleash Souls. The boss will occasionally summon a fair number of spirits. They don’t hit very hard but there are many, and cannot be killed. A good healer will heal though this, but ideally you want to run away. The last ability is called Wailing Souls. The boss will unleash a wail of souls. She does a 90 degree rotation of the room starting from the position of a random player. Many people do not realize, but this player has a debuff on them. After 3 seconds the boss will start to wail, and will continue to do so for 15 seconds. Anyone caught in front of her white beam (wail) will take a large amount of damage that ticks every 0.4 seconds, and will most likely die. Otherwise this is a fun fight, has a lot of raid awareness style abilities, and will reward you with

Should at any point you need to runback to the dungeon, I found this short video explaining how to resume your dungeon in a timely manner

In closing I would like to thank Eric, whose instance guides provided me with the the template I adapted into this guide.