Ever lost an Arathi Basin Fight?Read the comments of your team mates?

Ever lost an Arathi Basin Fight?Read the comments of your team mates? Did they look something like this?;

“What the hell are you people doing?”
“Defend, you retards”
“Let them win”
“Can you people do anything right?”

I’ve seen it way to much, In my battlegroup(RAMPAGE

) horde seems to loose AB all the time, and it seems like nobody knows what to do and everyone yelling at eachother. And i mean, how hard can it be to try to work like a team? Hard, appently. Most people say that to win an AB, You need 3 bases, then you just defend them. Yhea, sure, if you want a 30 minute game. It seems like most people dont know what the heck they are doing or not doing anything at all. So i got fed up with it, and decided to make this guide. I hope it might learn you something, or at least being a plesant read to you. Also, Before i begin: I want to thank Cottonmouth for the guide he posted on the offical wow forums, If you want to see it, you can look at it here, Many of the things i try to explain in this guide is stuff that i learned from him, But his guide just covers most of the basics, and it dosent include pictures, nor anything about the achivements and nothing about how to make a good premade. Also his has no Silly stuff :p

Never played the Arathi Basin? Take you time to read this , i hope you will learn something new!

Okay, First things first. Im going to assume you know how to join a battleground.When you join an Arathi Basin game. You will either spawn at Trollbane Hall (Allaince) or Defilers den (Horde). When you join you will get a display in the top-middle of your screen. This will tell you how your team and the enemy team is doing. 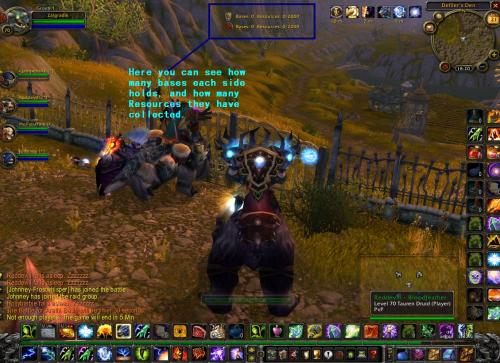 Now. Lets have a look at the map: 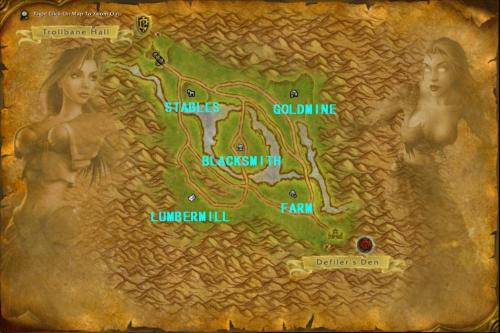 This is the field you will be fighting on, The Gray Symbols you see, are bases, and the whole point of the game is to Capture these bases and hold them, Each base generates Resources, and the goal of the game is to be the first to reach 2000 Resources. To capture a base you will have to scroll over one of the flags, when your mouse turns into a gear, you can RIGHT-click to capture a base(if the gear is grayed out, you are not in range to capture, or not in control of your character), it will take you 10 seconds and during this time, you cannot move, eat or cast spells, and if you are attacked while attempting to Capture a base, you will get interuppted. When you capture a base it will take 50 seconds for it to become your factions. When you have a base, your team will get a Ressurection point there, Where you can be brought back to life every 30 seconds. When you die and release in a battleground, you will be taken to the CLOSEST Graveyard. However, if you captured a base from the other team. They can come and try to “Defend their base, and if they manage to recap their base within 50 seconds, the base will instantly become theirs again. Here is what the flags look like: 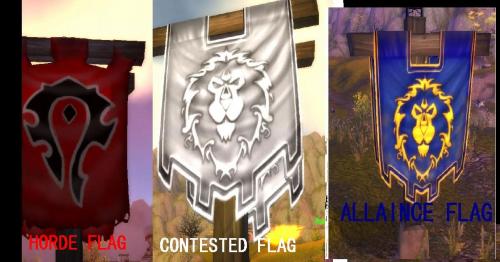 The bases go under diffrent names, I wrote them down above. 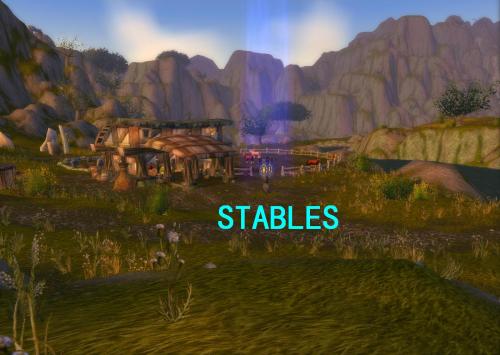 Stables(ST):This is the base closest to the allaince starting point. Its a though spot to defend as a horde, as you can get attacked from 3 diffrent directions. The Powerup pickup point is inside the building itself. Horde should not go for this position if they dont have the blacksmith.

Blacksmith(BS): This is the middle postion and the best one to hold, With this base, you will have a graveyard close to every other base. The only bad thing about the blacksmith is that you will not always see an incomming attack, as you have the Smith blocking you view, Cliffs down to the waterside etc. The Powerup buff is inside the Smith. 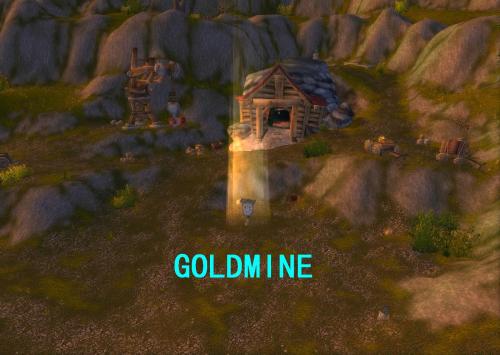 Gold mine (GM):The gold mine is a solid base to hold, as you can see your foes comming and will have an easy time alerting your teammates that your base is under attack. One tactic you can use while defending is to hide just a tiny bit inside the cave, watching the flag, Hiding yourself from foes, but the bad thing about this is that you cant watch out for incommings, They will be by the flag when you see them. The Powerup buff is on the wagon. 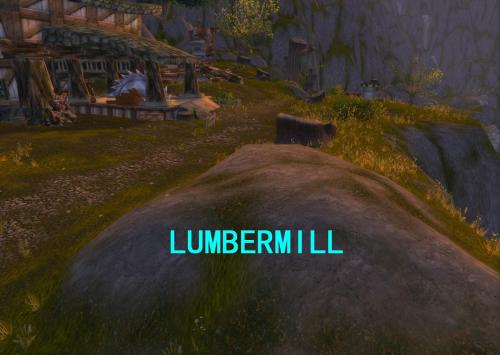 Lumbermill(LM):The lubermill is not quite as easy to defend as the goldmine, as you have 2 slopes to watch. One fun thing that you can do here is that if you have a knockback effect (Thunderstorm, Blastwave etc) you can knock enemys of the cliff. killing them with almost no effort at all. The Powerup buff is inside the sawhouse. 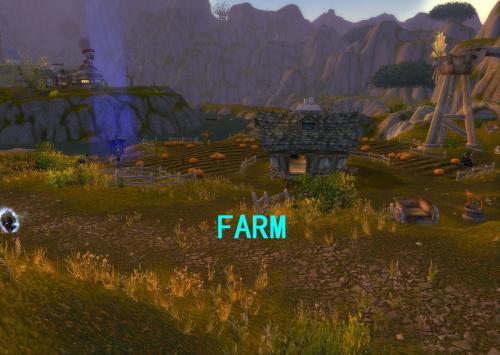 Farm(FA):The farm is the closest base to the horde starting area, and just as with stables. Its a though point for allaince to hold. The allaince should not try to get this base unless they hold BS. The powerup buff is inside the house.

Not everyone understands the point system, this can be seen on people that say; hold 3 bases and defend. This will result in a 30 minute game, if none of you bases are under sttack. Then it will be even longer, Read though this and i hope you will understand