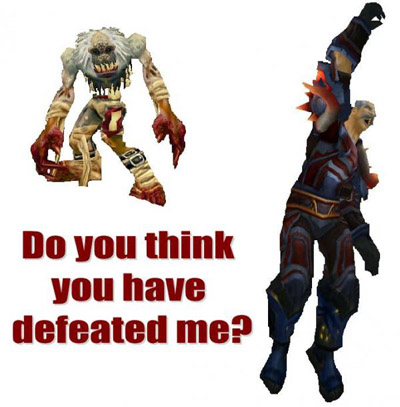 The death knight was a new class added in the Wrath of the Lich King. Blizzard calls it a hero class because of the many nice things the death knight is able too. In the start the death knight seems to be a much overpowered class, but it ends up as a normal class in level 80. I want to thank Jyambi for her nice Druid Healing Guide that’s leading me to make this guide about the death knight. Also thanks to www.wowhead.com and last to Jame of www.wow-pro.com for making it possible to write guides here.

What you need to use this guide: 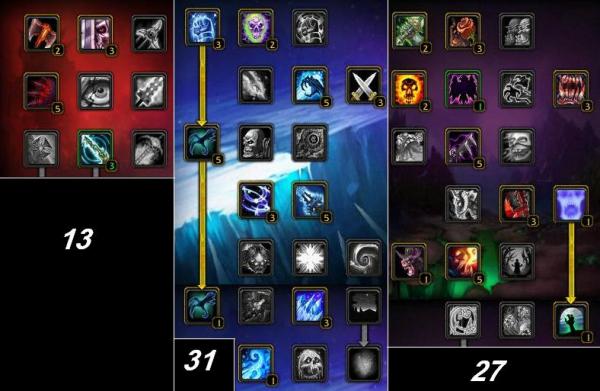 There are several ways to build you death knight talent. This should be the best. It’s used for dual wield. Dual wield is right now the best weapons for DPS as a death knight. Why this is the best choice?:

Plague Strike
Third most important spell in the spell rotation of PvE dps. It drops off a decease called Blood Plague that it is very important to always get on the target. Very nice for PvP also because it removes a healing over time effect like Regrowth Renew etc.

Howling Blast
That is number 1 of damage abilities! Does double damage if mob infected with Frost Fever. For both raiding and PvP DPS this is the best. So its important to cast Icy Touch to get the effect Frost Fever and then pestilence(if mass kill). IF you to also got Killing Machine on you will crit up to 5500 to all in front of you with an instant spell.

Icy Touch
Great magic, most of the combos as a death knight starts with Icy Touch. Its very helpful for tanks but also you need it for Howling Blast.

Pestilence
Used for mass kill dps or AOE levelling. Always cast it after a Plague Strike or Icy touch.

Icebound Fortitide
I often use this ability, to avoid being one-hitted when I get aggro. It’s a tank spell but works great as a dps. Cast this spell when a boss/mob does an AOE spell or a spell that’s hit all nearby.

Horn of Winter
This is the death knight’s buff. Make sure to cast it when it runs out.

Raise Dead
This spell is used to return your ghoul from a dead humanoid or Corspe Dust. Very important.


The spell rotation is quite simple. It builds on 5-6 spells. Death knight spells build much on combos. This below is for single target dps.

After doing this rotation, all your runes are on cooldown. This takes max 6 seconds. You’ll just follow the process again and again until the boss/mob is dead.

Now to the AoE kill DPS.

Make sure you don’t pull a troop of mobs or a boss with Howling Blast. To prevent that, you need to get behind the mob with front toward the tank.
here: 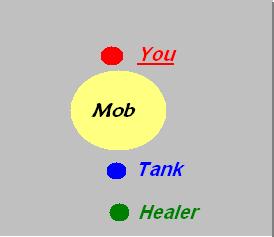 The ghoul is very important both for DPS and questing. Its like every other pet, set it to defensive stance and follow.

5 good rules for your ghoul:

As many healers don’t take care of healing pets, you need to do it!. Because of that keep an eye on your ghoul. When ghoul is at 7000-8000 hp, start heal you ghoul with death coil, it’s just a little extra click and it rewards a high extra damage.

For me, my ghoul does 1/4 of my total damage, maybe more.


Gear is what you want in level 80. Gear means what you wear and is created to improve your stats. In this section I’ve made a list of what you need to get the right DPS in heroic, raids etc. Death knight will need a mix between critical strike rating, haste rating and attack power/strength.

WoWhead has an excellent tool for finding and comparing gear. It has an adjustable weighting system preset for healing druids and an advanced filter so you can look at items only from a specific level range or source. You can compare gear quite easily with this source as well – it even has a nice system for comparing two hand weapons with combinations of one hand and off hand items. I highly recommend checking it out for your gearing questions.
– Jiyambi

Rune of the Fallen Crusader Crafted by runeforging

Eternal Belt Buckle Simply adds a socket to the belt of any choose. AH price is normally 100g.

Greater Inscription of the Axe Requires exalted with Sons of Hodir. Cost 100 g at the quartermaster in The Storm Peaks.

Glyph of Plague Strike
This one is just a must. 20% extra damage from plague strike both to AoE DPS and single DPS.

Glyph of the Ghoul

Glyph of Pestilence
Of minor glyphs this is the most important. Used for AoE kill.

It’s just a must! Without that you are totally lost in Naxxramas for example. It tells when bosses cast spells.

It’s a very helpful add-on for all new dinged classes if you want get the best gear for heroic dungeons and other stuff. I use it and it’s a great help. It’s from www.curse.com were you can find a lot of add-ons to customize your game play.

Also useful for any class. I added this add-on to the list because its fun to see, especially when you playing with friends, how high your damage is.

Very helpful for heroic raids when bosses can one hit players. Keep an eye on this little meter, if it gets too high stop attacking to avoid more aggro.

LEVELING AS A DEATH KNIGHT


The best way for a death knight to level up quickly, is to AoE.

Jame already wrote a nice guide about spell rotations etc., just check this one out:
How to AoE with a Death Knight

If you don’t like AoE or just find it difficult, then you can use solo levelling with this.


Version 1.0 – First time this guide is out. All the basic things are here. (Currently:)

In Progress:
Version 1.1 – A boss specc and rotations chapter will be added.