GUIDE: HOW TO BEAT WEISS EASILY IN 10 STEPS – FF7 REMAKE 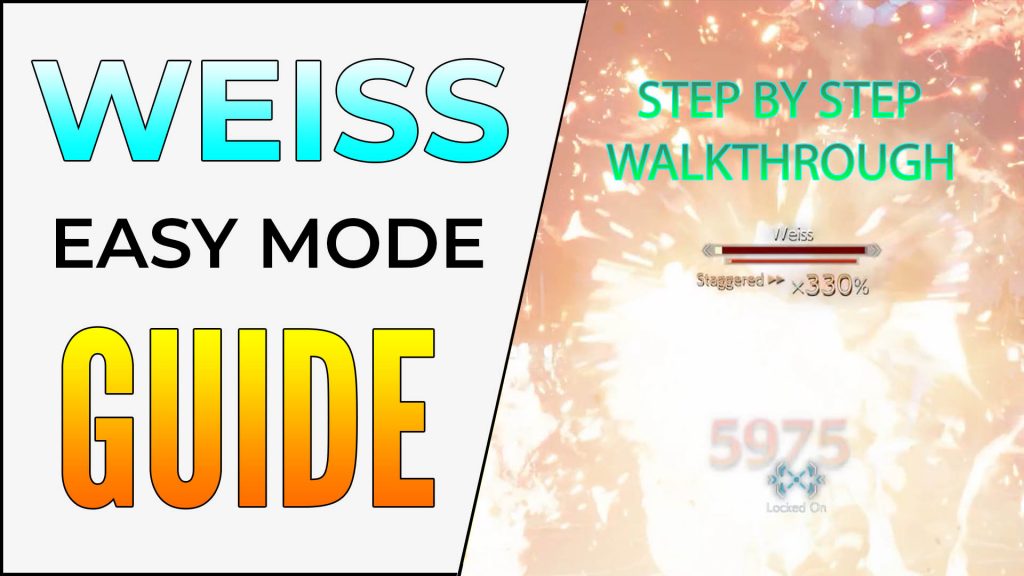 Welcome to my 10-step strategy guide to to defeat Weiss easily in PS5 FF7 Remake Intergrade.

At first glance, Weiss can seem to be a very difficult boss:

There are a lot of strategies going around to beat him slowly and using Revival Earrings to survive his ultimate attack, but this is definitely not the best way to beat Weiss. You can defeat him easily within 3 minutes, without any of your party members dying or even taking a single hit. If you follow this strategy, Weiss won’t even get to his 2nd phase and you’ll destroy him during the first Stagger.

This strategy is easy to reproduce, it just takes a little bit of practice to learn how to dodge his 3 abilities with Tifa, and you’ll have plenty of room for mistakes thanks to our gear and materia setup.

There is a video guide on my YouTube Channel that showcases this strategy, if you prefer this format. Here’s the direct link: Weiss Guide on YouTube 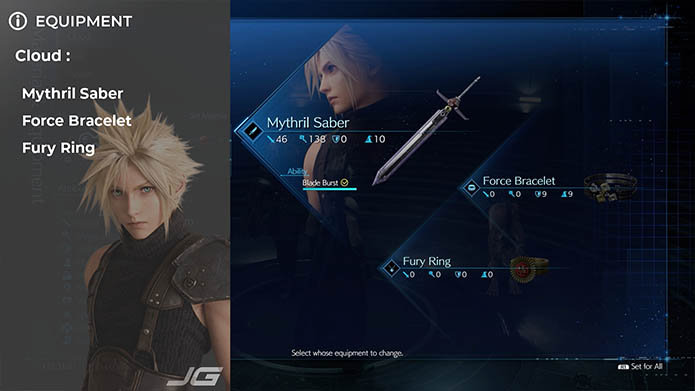 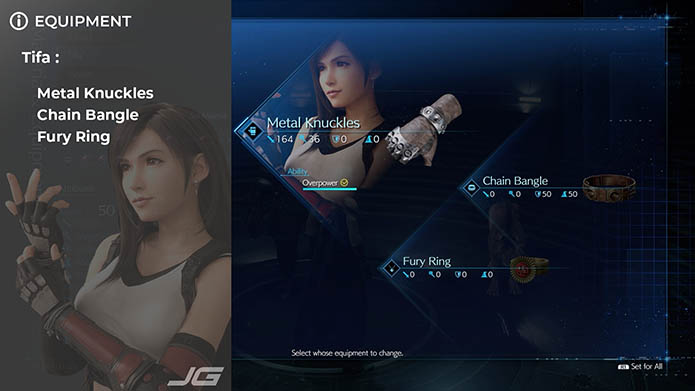 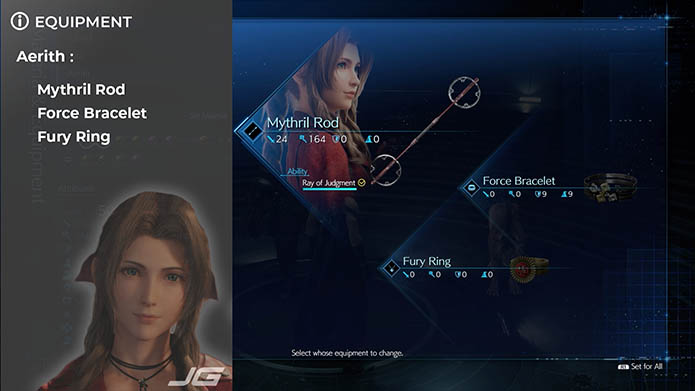 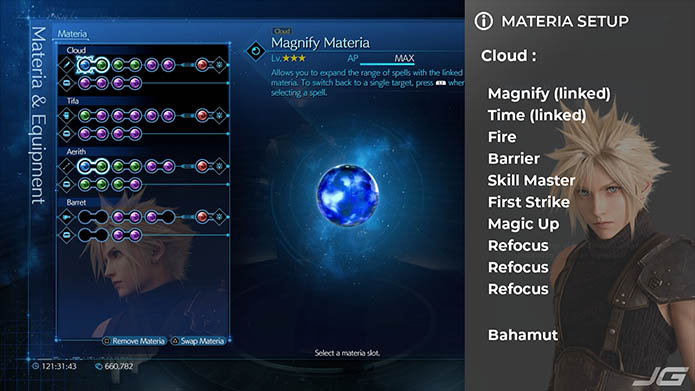 Note: Refocus materias are only there for the stats boots. They give +4 to your stats and we’re interested in the +4 Magic Attack. The higher Cloud & Aerith’s magic attack stat is, the more damage their spells will do, and you’ll see why this is important later in this guide. 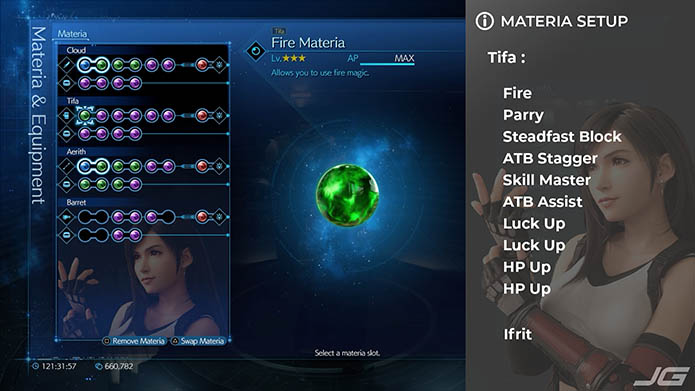 Note: Tifa will be our Tank for this fight and we’ll control her the whole time and give commands to Cloud & Aerith via the tactical menu only.

Parry materia will help us a lot to dodge all of Weiss‘s attacks. If you miss some Parries you’ll be okay because of our High HP and High Block thanks to Steadfast Block (which works while you’re using Parry too!). We’ll also have Barrier on Tifa at all times to mitigate even more damage while you learn to dodge Weiss’s abilities. 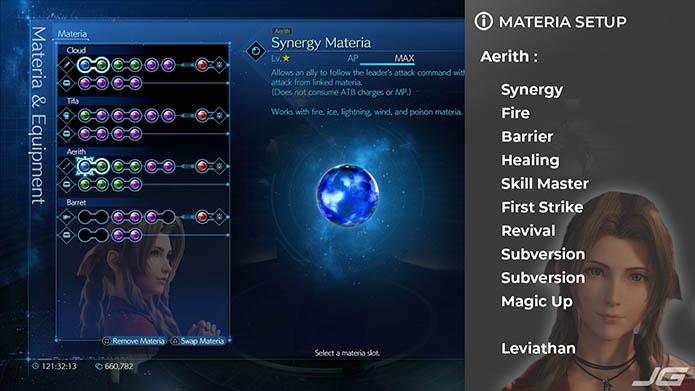 Note: Revival and Subversion materias won’t be used in the fight, we’re only slotting them in for the +2 Magic Attack stat boost they provide.

WHY THOSE MATERIA CHOICES?

Other materias are self-explanatory. 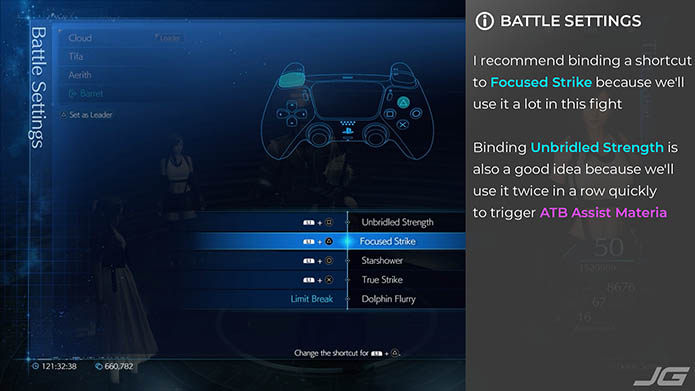 This is just a suggestion for a quality of life, but you can do everything via the tactical menu if you’re not comfortable with shortcuts.

I also recommend binding Unbridled Strength and True Strike because we’ll use them twice in a row quickly to trigger ATB Assist Materia. 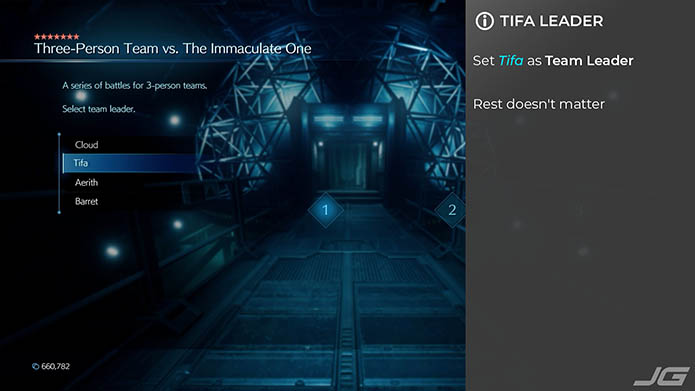 In the Battle Simulator, set Tifa as Team Leader. You want to control her at the start of the fight. Weiss will only chase whoever you’re controlling.

The rest doesn’t matter, pick any order for Aerith and Cloud.

Barrier on Tifa will make it easier for you to learn how to dodge Weiss’s attacks, she can take a few hits while your learn the timing. 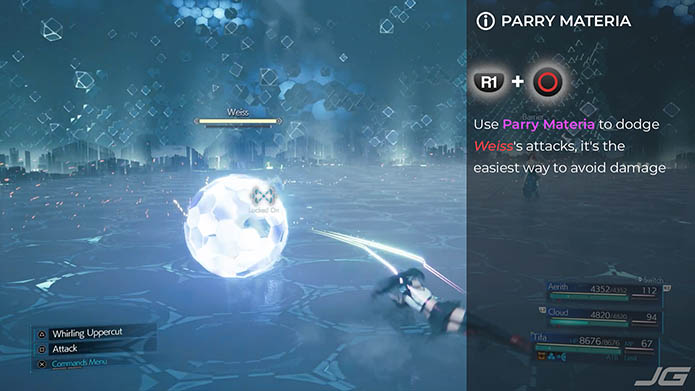 Use Parry Materia to dodge Weiss’s attacks, it’s the easiest way to do avoid damage 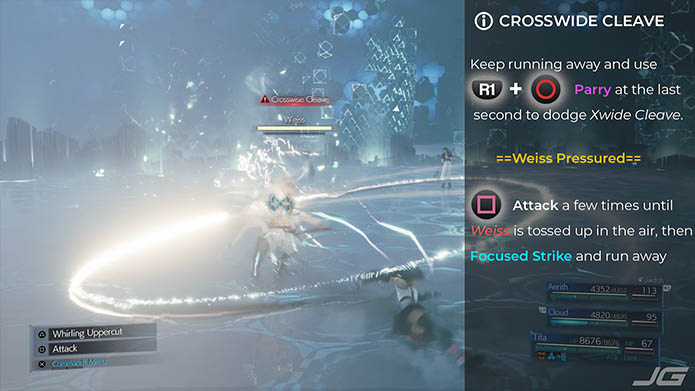 Keep running away and use Parry at the last second to Dodge it.

(Square) Attack a few times until Weiss is tossed up in the air, then use Focused Strike and run away 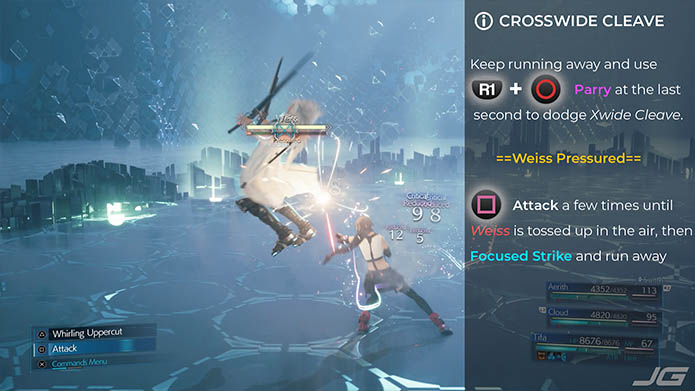 On this screenshot you can see Weiss is tossed in the air after a couple of punches from Tifa. This is the moment to use Focused Strike safely. 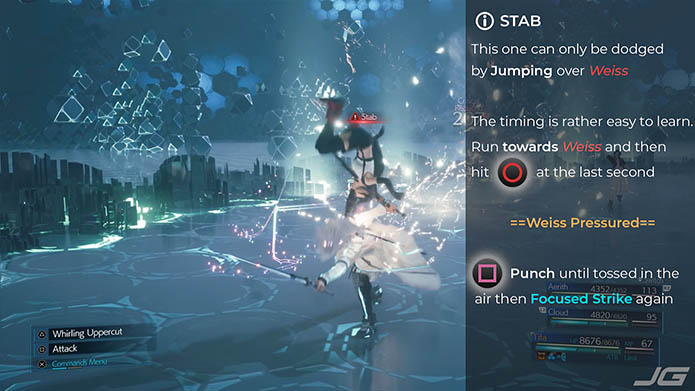 This one can only be dodged by Jumping over Weiss

The timing is not that hard to learn. You have to run TOWARDS Weiss and then hit (Circle) at the last second 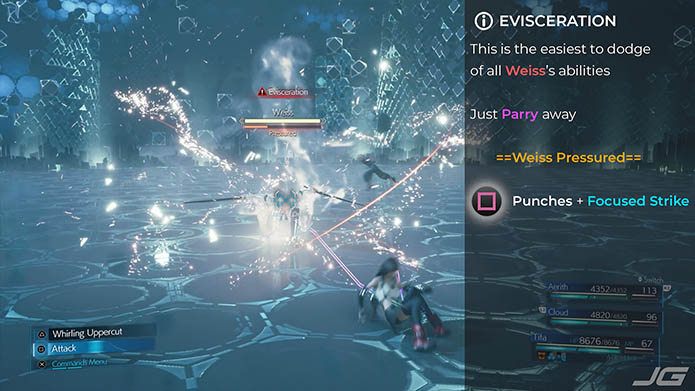 This is the easiest to dodge of all 3 abilities. Just Parry away. Normal dodge also works of course but Parry Materia makes this much easier

And that’s all you need to learn for the Double Katana phase. You only need to learn how to dodge those 3 abilities and you’ll get to the STAGGER phase easily 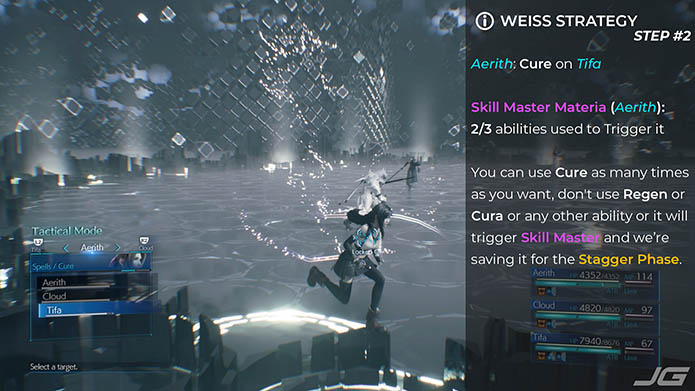 Use Cure with Aerith on Tifa

You can use Cure as many times as you want, just don’t use Regen or Cura or Curaga or any other ability besides the 2 we’ve already used so far (Barrier and Cure) or this will trigger Skill Master Materia and we’re saving that for the Stagger phase to get ATB back and increase our damage output. 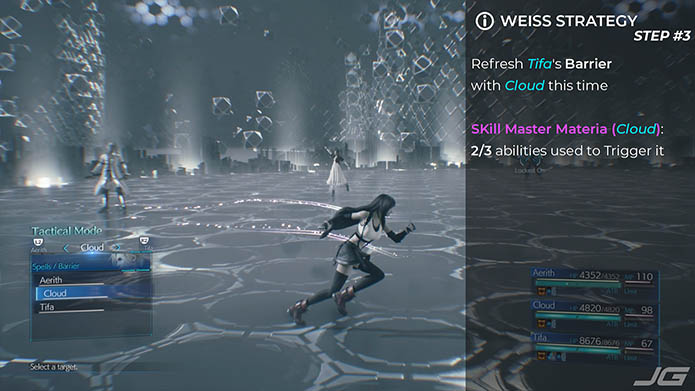 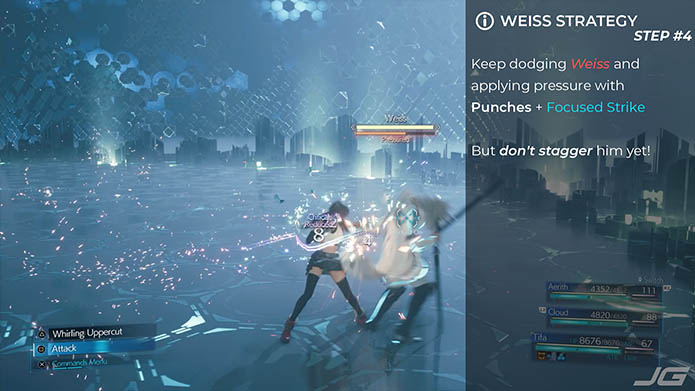 But don’t stagger him yet! 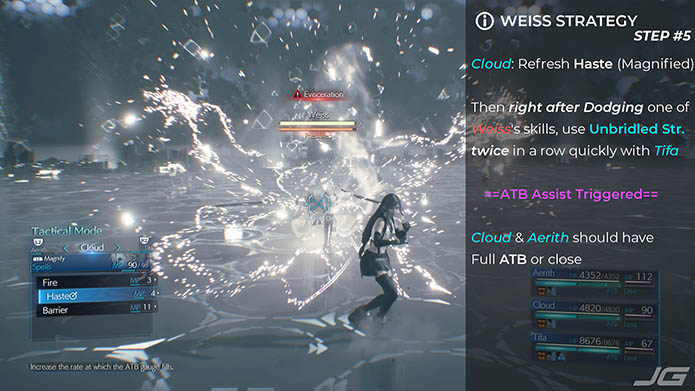 Then right after Dodging one of Weiss’s skills, use Unbridled Strength twice in a row quickly with Tifa 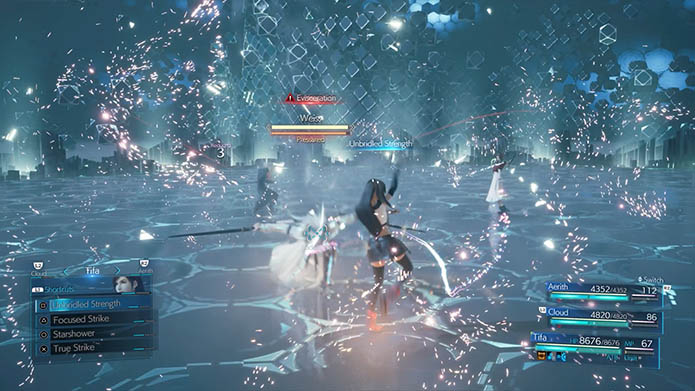 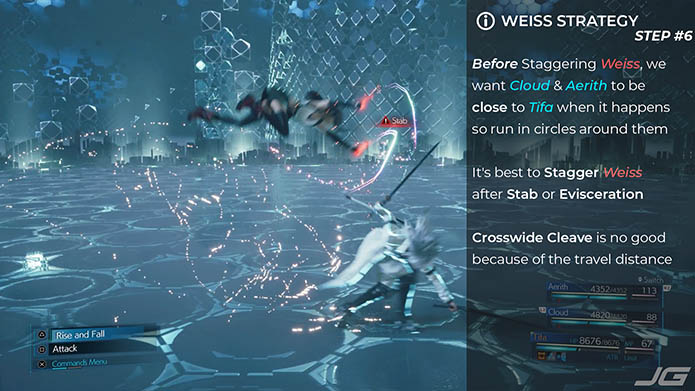 Before Staggering Weiss, we want Cloud & Aerith to be close to Tifa, because once Weiss is staggered, we can’t waste a single second moving our party members around, everyone must be close to Weiss when he becomes Staggered.

So run in circles around Cloud & Tifa and wait for Weiss to use Stab or Evisceration, dodge it and then Stagger him.

Crosswide Cleave is no good because of the long travel distance. So wait for Stab or Evisceration. 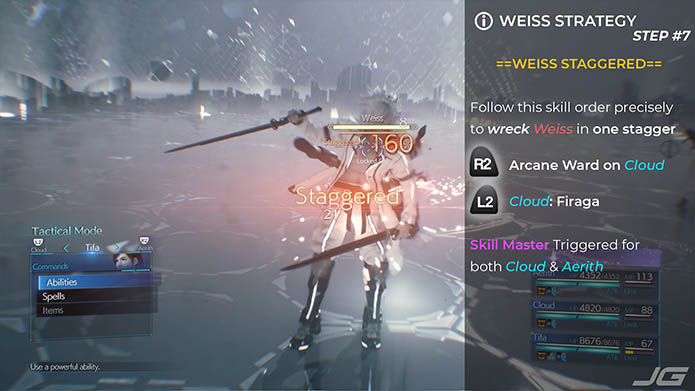 Follow this skill order closely and you will wreck Weiss in one stagger. 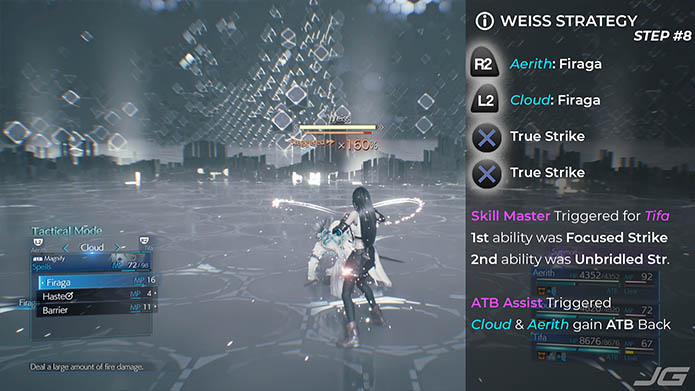 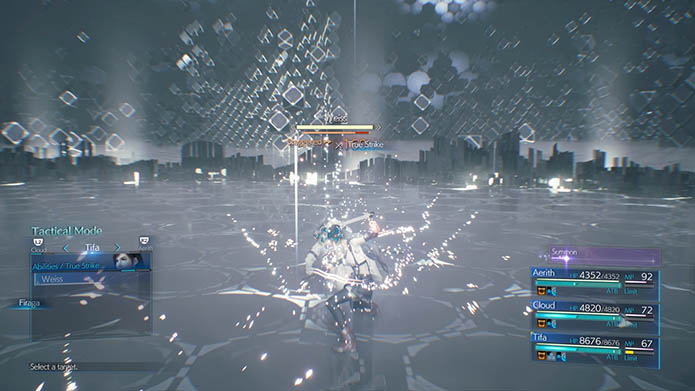 Use True Strike twice in a row quickly to trigger another ATB Assist and feed more ATB to Cloud & Aerith. 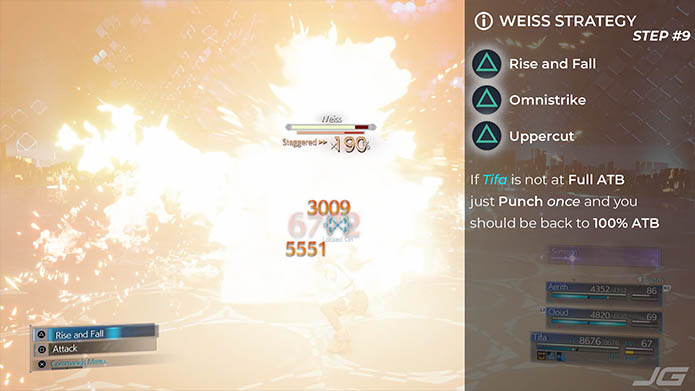 Tifa should be at Full ATB, if not, just Punch once and will be back to 100% ATB 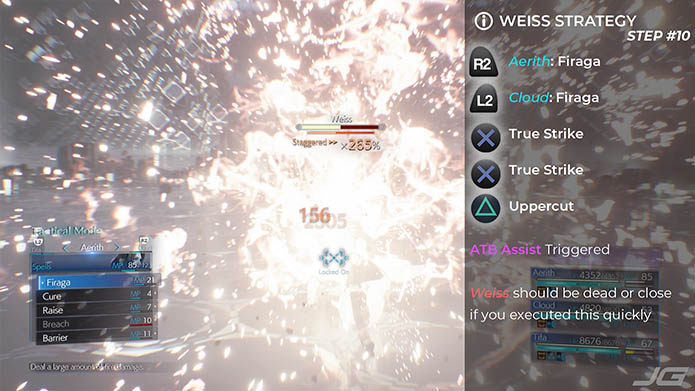 Weiss should be dead or close if you did the stagger phase correctly. 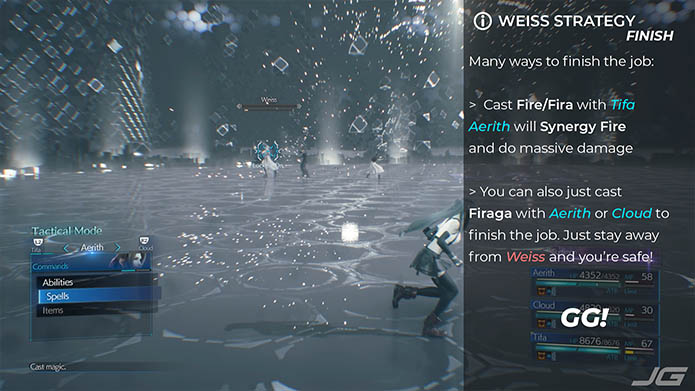 You have plenty of ways to finish the job:

You can also just cast Firaga with Aerith or Cloud to finish the job, they should have some ATB left or will get some back quickly thanks to Haste. 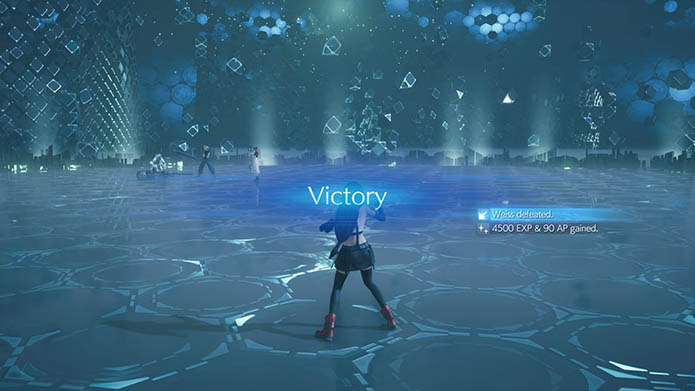 Please drop a comment and tell me how it worked for you! Don’t forget to subscribe on my YouTube channel if you don’t want to miss out on more detailed guides 😉