Hunter: Do you want to level one?

Home / Hunter: Do you want to level one?

Home » Guide » Class Guides » Hunter: Do you want to level one?

Hi there, and welcome back to my “Do you want to level one” series of Guides, aimed at players who have yet to step foot into WoW, or those struggling on whether to play a certain class! This time, I am to help you decide on whether or not it’s a good idea to level up a Hunter.

The first thing I think that I should inform you of is what exactly a Hunter is. the tricky thing is, that a Hunter is a different ‘thing’ at different levels – for ease, I’ll split it up into two categories – levels 1-10 and 10-80– but I will only cover the leveling of the Hunter.
So, let’s begin!

Some people are frankly put off by these levels. Here you essentially shoot something in the distance, and then struggle to kill it as it gets within melee range of you! Do you really want this? I say yes. You have some tools that really help you, such as Concussive Shot for increasing the time in which the mob takes to get to you, and Aspect of the Monkey and Raptor Strike for when it does. It really isn’t all that difficult if you learn to ‘strafe‘ – essentially moving sideways and backwards at the same time. (Moving backwards slows your movement speed by 75%!!!)

If you’ve never leveled anything before, this is cool. If you’ve ever leveled a Warrior, you’ll cry. This is so easy, it’s untrue. “E-Z Mode“, you’ll hear it referred to. No joke, combat goes something like this :

Seriously though, at this level, your pet will have a similar amount of armor and health points as an average-geared warrior. You won’t often take the aggro off of an enemy – as in, it won’t attack you no matter what! And you can go, using a basic ‘shot rotation’ – or series of spells in a set order – for almost all of eternity without having to stop to eat or drink.

You can easily solo elites thanks to certain spells that help you heal your pet, and basically level faster than any other class when played right. Sounds good huh? Well, here are the cons.

– Some people won’t take you seriously, or lightly. There are so many ‘bad‘ Hunters out there, to them, that they are all the same. Sucks.
– Difficult to find a group. Why take a ‘Huntard‘ when you could have a Mage?
– Boring! It’s so easy, it really can be sometimes boring killing mobs over, and over, and over again.
– Difficult at first to define a role for a Hunter – perhaps you’ll have trouble getting into a raiding Guild later on??

That’s it. Make your own mind up! As in my last guide, I’m now going to cover each of the races and why you should/shouldn’t pick them for your Hunter!!! 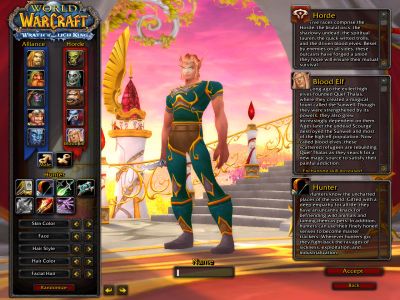 Arcane Torrent
“Activate to silence all enemies within 8 yards for 2 seconds. In addition, you regain 6% of your Rune Power, energy, mana or rage.”

– A great ability, regaining mana and helping to silence healers and other spellcasters.

Arcane Affinity
“10 point skill bonus to Enchanting (note, this also raises the cap by 10 at each level of enchanting). “

– Absolutely rubbish. No, not really! It’s OK, provided you take enchanting – if you do you can instantly make a profitable item, Lesser Magic Wands.

– You shouldn’t really be getting hit by spells! But when you do (and you will really), I suppose this is quite useful. rather have a
CoS though 😉 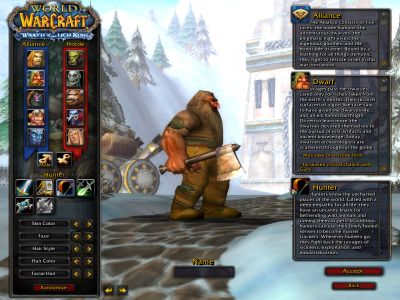 – Obviously a pretty cool PvP talent here, enabling you to get out of a Rogue’s poison effects and be immune to them for the next 8 seconds. Aslo removes things like a Warrior’s Deep Wounds which is cool. Useful talent.

– Sweet talent! Since you are going to be doing the first 10 levels without a pet and with a gun, this 1% increases critical hit chance means you are going to kill some of those mobs quicker. Goes without saying, cool talent!

– Hmm. Some say a good PvP talent, because of Frost Mages. I think it’s rubbish. Your choice really.

-It’s OK for the first few levels, really. But with your tracking (And hopefully your gathering professions ^^) you won’t really find much use for this. (Though it is occasionally useful for quests – don’t ioverlook it as I have done in the past!) 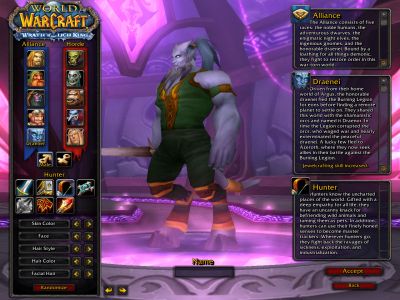 Gift of the Naaru
“Activate to heal your target for 35 + 15 per Level over 15 sec – 40 yd range – 1.5 sec cast – 3 min cooldown. The amount healed is increased based on the caster’s Spell Power or Attack Power, whichever is higher. This ability does not loose casting time from taking damage. (At level 1 it heals 50 health, and 1235 at level 80)”

This is a great racial for any class, if you ask me. A big free heal? Cool!!! Works as a free mend pet, anyway.

Heroic Presence
“Increases chance to hit by 1% for you and all party members within 30 yards.”

– A cool passive ability here. After all, you’re going to be shooting from afar nigh on the whole game – increased hit cannot hurt you!!!

Gemcutting
“5 point skill bonus to Jewelcrafting (note, this also raises the cap by 5 at each level of jewelcrafting).”

– Are you going to take J/C? If you are, look forward to things like Titanium Impact Choker 5 levels sooner. If not, a wasted racial. Simple!!!

Shadow Resistance
“Reduces chance to be hit by Shadow spells by 2%.”

– – I suppose this is another one of those racials which doesn’t hurt – you’re 2% more likely not to get hit by shadow spells. Again, not a great one, though. 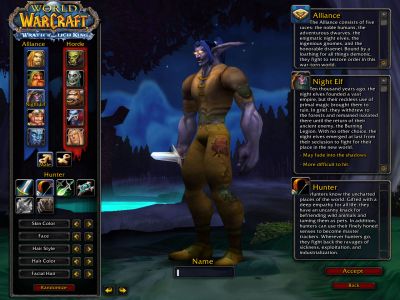 – This is a great talent for a Hunter. Here’s a tip for a technique –

– Grab aggro off of your pet by accident. NOO! I have to melee! No you don’t!
– Shadowmeld!
– Wait for pet to regain good aggro – 3 seconds or so after the ‘Growl‘
– Resume onslaught, damage free!!

Elusiveness
“Reduces the chance enemies have to detect you while Shadowmelded or Stealthed.”

– Really just goes hand in hand with the last one

Quickness
“Reduces the chance that melee and ranged attackers will hit you by 2%.”

Wisp Spirit
“Transform into a wisp upon death, increasing speed by 75%.”

– Chances are, if you are unfamiliar with this class you will die before level 10. An extra add? Uh oh. So this is.. well, it’s just great. Corpse run in an instance? First there = first to regain mana. Killed in a BG? Go get your corpse back, it’s quicker!!

Nature Resistance
“Your resistance to Nature spells is increased by 2%.”

– I’m not a big fan of these racials. Quite why they can’t just give us an instant heal for 75% of base health I don’t know 😉 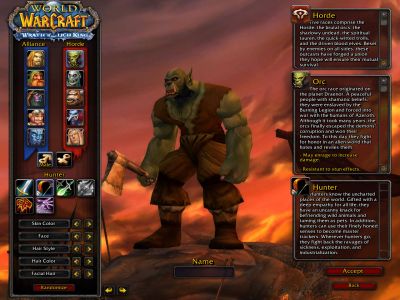 – Awesome. Absolutely awesome. Your ranges Attack Power is modified by AP, so more of this = your bow hitting harder.

Hardiness
“Duration of Stun effects reduced by an additional 15%.”

– I can sum this up in two statements here. PvP – priceless. PvE – worthless. ‘Nuff said!

– Read it. And again. Still can’t figure out why this is good? Quit WoW! Just joking, but really… nah, I’m not going to explain.

Axe Specialization
“Expertise with Axes and Two-Handed Axes increased by 5.”

– Can’t grumble with this one. After all, you will be using axes in the starter zone, when you have no real ranged duration – so this helps cut through the mobs that much quicker. 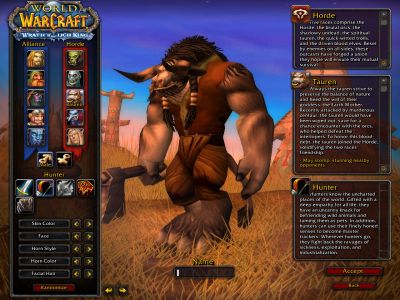 War Stomp
“Activate to stun opponents – Stuns up to 5 enemies within the area for 2 seconds. 2 minute cooldown.”

– :O I’ll say that again. 😮 !!!! This is an absolutely amazing talent, you will use it every 2 minutes. That’s an order. At the end of the day, you’re stunning an enemy so he can’t hurt you or run away. Get it done!

Endurance
“Base Health increased by 5%.”

– A good one here. More health = increases survivability – I don’t hear anyone moaning!

– Are you taking Herbalism? Yeah? Cool, this is good for you. But you’re not? O.K, it’s rubbish for you.

Nature Resistance
“Reduces chance to be hit by nature spells and effects by 2%.”

– I’ve already said it, but heck I’ll say it again. These talents are WORTHLESS! (Opinion.) 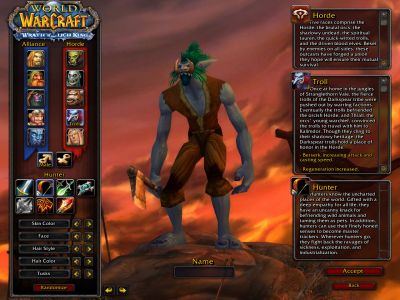 Berserking
“Activate to increase attack and casting speed for 10 seconds. Speed is raised by 10% at full health, increasing as health is lost to a maximum bonus of 30%. 3 minute cooldown.”

– Definately a good one. You get health back quicker, and get some back in combat – you’ll basically be continuously regaining more health than anyone else after you get your pet. Cool!

– The last one was useless, this one rocks. It’s fantastic!

Da Voodoo Shuffle
“Reduces the duration of all movement impairing effects by 15%. Trolls be flippin’ out mon!”

– I like this one. Not only the cool name and description – Blizz do have a sense of humour you know – but it’s really good. There is nothing more annoying, in the world, ever, than movement impairing effects. Fact!

…Conclusion. (Is this an essay?)

So, you’ve made a Hunter. What happens now?
Well, first off head on over to this page and learn how to kite with your Hunter – this is essential.
done that? O.K. Head on over to Zerinj’d fantastic Hunter Leveling Guide and Tips, and get to it!
Need help? Then get yourself over to the 1-80 Leveling Guides offered by this site! Good luck!

I’d like to take this opportunity to thank you for reading my guide. If it helps one person create a Hunter and be happy, then it has done its job. (If it makes many Hunters… well, don’t blame me. I didn’t know, I swear!!!)

Oh yes, a thought. My reccomendations are as follows –

– Orc, every time. It’s the shoulders that get me!!

– Troll, I think. A good starting area – though I’d probably go over to Eversong Woods at level 6 – and a good, balanced set of racials.