If you followed my previous guide, you should be about halfway done with level 60. If you are not, don’t worry about it, just follow the guide, you will catch up with it eventually, because I’ve been very generous with my calculations. In any case, there are extra circuits at the end of the guide which will help you catch up, should you still be behind in levels.

I’ve done a lot of testing during the beta, and to my experience, the quickest way to level is to go for the Unholy tree first. You don’t have to follow my advice, you can use whatever talent build you have, but you can trust my experience, the build I recommend is great for leveling.

At level 60, you should have the following talents:

And the final build we’re aiming for is:

This is a list of equipment you can buy for your Death Knight. You don’t have to buy it, but it will just help you level faster.

I assume that you haven’t done any quests in Outland before level 60. If you have it’s not a problem, there are several points in the guide where you can jump in.

In Nethergarde Keep, go to the big building with the mailbox infront of it – the one which is on the northern part of the village. Inside the building turn left and left again, and you should find an NPC called Bernie Heisten, buy a Nethergarde Bitter from him. We’ll need it in a quest later on, so make sure you don’t drink it.

Fly to Honor Hold. After you land, find Marshal Isildor, easy to spot on the minimap thanks to the yellow “?”. Turn in the quest and get the follow up [60] Force Commander Danath. Go south and enter the biggest building, find Commander Danath in there, he is on the 2nd floor. Turn in the quest and get the two follow ups: [61] The Legion Reborn and [61] Know your Enemy.

Go to the inn and make it your home location.

1. Mount up, exit the village by the west gate and go to the destroyed tower down the path. Get the quest [61] Waste Not, Want Not from Dumphry then go to Lieutenant Amadi, turn in the quest and get the follow up [61] Fel Orc Scavengers.

2. Go directly northeast of the tower and you should quickly find some Bonechewer orcs overlooking the big canyon called the “Path of Glory”. Go eastwards while staying on top of the cliff and kill as many orcs as needed. At the same time look for metal cogs and wooden planks on the ground, until you complete both quests.

3. When you are done with [58] Fel Orc Scavengers and [61] Waste Not, Want Not, ride southwest back to the guard tower and turn in both quests, get both follow ups: [58] Ill Omens and [61] Laying Waste to the Unwanted.

4. Mount up, ride through Honor Hold and this time exit by the east gate, ride to the destroyed tower on the right-hand side of the road. You’ll find Sergeant Altumus there, turn in the quest and get the follow up [61] The Path of Anguish.

5. Ride east and slightly northeast and you’ll find a bunch of imps and infernals at (65, 58 ). Kill them and also find and kill a Dreadcaller, which you should find in the same area.

6. When you are done with [61] The Path of Anguish, ride north and cross the “Path of Glory”, and then follow the cliff overlooking it, going westwards (that’s the “horde side” of the Path of Glory). Get off your mount when you encounter the first fel orc and clear the way going west, while staying on top of the cliff. You should soon see a big orcish catapult (58,47). 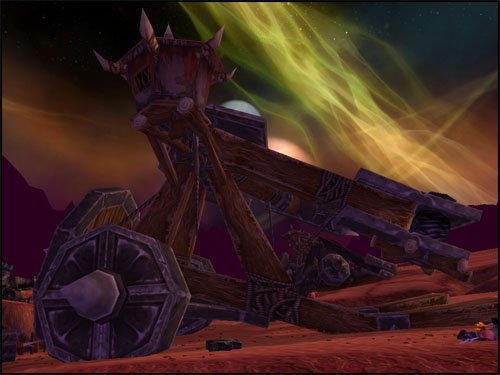 Go next to it and right-click the Flaming Torch from your inventory. This should set the catapult on fire and you should get a quest update. The next 3 catapults are further west along the path of glory, grind your way through the orcs, find the 3 other catapults and burn them.

7. Once you have completed [61] Laying Waste to the Unwanted, ride west and through a great wall, then follow the trail and keep going west until you reach a fork (29,46) where you should see a smaller trail going northwest. Follow it and you should find the Temple of Telhamat (23,41).

All those quests are given near the entrance of the Telhamat. Further up and to the left you can buy the manuals to raise your first aid past (300) if you want to. The NPC selling them is called Burko.

Go to the main building (which is also the Inn) and get [62] The Pools of Aggonar from Amaan the Wise.

Exit the building and go east, you should find the gryphon master, get the new flight path.

8. Right behind the gryphon master, if you look down the cliff you should see Sedai’s Corpse in the distance, it’s easy to spot because it’s surrounded by a white glow. Get down the cliff and go to the corpse, turn in the quest and get the follow up [62] Return to Obadei.

9. Mount up and ride back to Telhamat, turn in [62] Return to Obadei. Makuru – one of the NPCs next to Obadei – should have a quest for you now, get the quest [63] Makuru’s Vengeance.

10. Go to the gryphon master again and fly to Honor Hold.