As I promised yesterday on my blog, here is a preview of my Death Knight Leveling Guide. Both the Alliance and the Horde ones are pretty much finished at this point, but I won’t release them now for security reasons (too many shady websites ripping off my guides :/ )

Anyway, here are a few pieces of my guide, just to give you a taste of how my first class specific leveling guide will look like, and that’s just the tip of the iceberg 😛

Go to the Crypt of Rememberance and turn in both quests, get the follow up [55] How To Win Friends And Influence Enemies

Spend your talent points as follows:

==Note== On a Pale Horse is an incredible talent. You have to realize that until level 77 in Northrend, you won’t be able to use a flying mount while leveling, so you will stick to ground mounts for 21 more levels starting from now. Now imagine how much time you’re going to save with this 20% extra mount speed. A very significant amount, trust me 😛 The fear and stun 20% reduction is also a nice bonus. 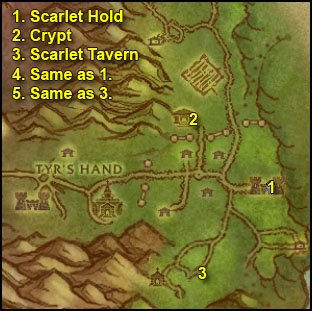 1. Go back in New Avalon, to the Scarlet Hold, it’s that big casern on the east side of New Avalon. When there, open the Ornately Jeweled Box in your inventory and equip the two One-Handed Swords. Then just start attacking people in there until one of them tells you what you want to know.

2. Go back to the Crypt of Rememberance, turn in and get the follow up [55] Behind Scarlet Lines.

Equip your new ring (instead of the green one of course) and put your talent points as follows:

3. Get out, mount up and ride a long way south to the Scarlet Tavern (56,80). Go to the upper floor and turn in, get the follow up [55] The Path Of The Righteous Crusader. Also get the other quest [55] Brothers in Death and get out of this building.

4. Ride northeast to the Scarlet Hold. Clear the way up to the 2nd floor (3rd floor if you use the North American Floor Numbering system) and go to the central main room. On a table there you’ll find the New Avalon Patrol Schedule. Loot it. 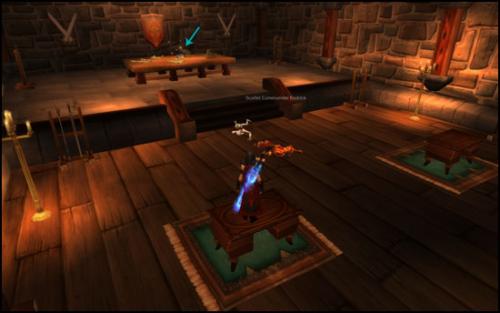 After that, go down all the way to the cellar basement, where you will find Koltira Deathweaver. Turn in your quest, but before you get the follow up, read the next few lines.

Koltira will create an anti-magic barrier, you must fight inside it as much as possible to reduce the damage you’ll take from the acolytes. You can pull them inside with Death Grip as well. After about 2 minutes, High Inquisitor Valroth will come. Pull him inside the barrier with Death Grip and kill him. Mission accomplished. Don’t forget you have potions if things go wrong.

You’re more than ready now, so get the follow up [55] Bloody Breakout and protect Koltira. It doesn’t matter if you die, you’ll get resurected, but Koltira must survive. This should be easy though.

Once Valroth is dead, his remains will appear on the floor:

Right-click them to loot Valroth’s Head.

5. Go back to the Scarlet Tavern. Turn in both quests, get the follow up [55] A Cry For Vengeance!

Spend your talent points as follows:

==Note== You just became godlike. The biggest upgrade here is Master of Ghouls. Now you’ll always have a ghoul fighting for you, until it dies. And if it dies, just re-summon it. You’ll also be able to control your ghoul from now on and will get a pet bar:

Controlling your ghoul properly will be a nice advantage for you in the future. Here are a few tips to get the most out of your ghoul.

An amazing skill. It’s a big dps burst, which can last a total of 1 minute if you provide enough runic power. Here are a few tips:

Thanks to dirge, you’ll get more runic power now, that means you’ll have to try to squish in some extra death coils in your attack cycles. If you pay attention to your cooldowns, you’ll see there’s often room for an extra death coil here and there during your cycles.

And another snippet in case you haven’t had enough!

Take a gryphon ride back to Death’s Breach. Go talk to The Lich King, get the follow up [55] An End to All Things.

Look in your inventory for a Horn of the Frostbrood.

Right-click it. You’ll climb on a Frostwyrm and your action bars will be replaced by this:

You need to kill 150 Scarlet Soldiers (a piece of cake) and to destroy 10 Ballistas. The ballistas are a little more tricky, because you must avoid their javelins.

It’s quite straight forward though, you simply have to strafe to the left or to the right every time after you shoot, and the javelin will miss you. Like on the screenshot below: 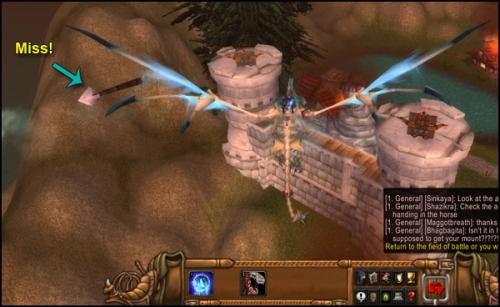 That’s not even 5% of the guide by the way, but it’s enough to give you a first impression 🙂