This is a guide for fast leveling through Echo Isles as a Troll character. If you’re another race, I recommend that you choose another guide.

Why you should use this guide:

These notes are important so that you won’t get lost in the guide. If you follow the instructions accordingly, there should be no questions about what you’re supposed to do next.

This guide is not yet converted to the WoW-Pro AddOn.

Special thanks to: Brune, Bitsem, TotalBiscuit 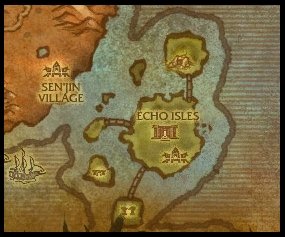 Go to your class trainer in the training grounds. Ortezza for hunters, Tunari for priests, Legati for rogues, Zen’Tabra for druids, Soratha for mages, Nekali for shamans, Voldreka for warlocks and Nortet for warriors.

Turn in the quest at your class trainer and accept: [1] The Basics: Hitting Things.

2. Destroy 6 Tiki Targets in the training grounds. They are voodoo-masked target dummies. 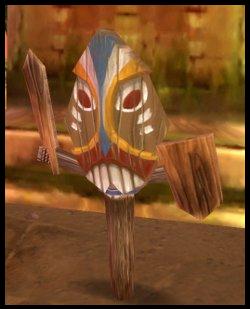 When you’re done, turn the quest in to your class trainer and accept [1] A Rough Start.

3. Go to the outskirts of the training grounds and kill Wildmane Cats for 6 Wildmane Cat Pelts. The pelts have a 100% droprate but the cats do a scary leap when they are attacked.

Go back and turn in the quest and accept [2] Proving Pit.

4. You must prove yourself to the trolls by fighting a naga in the proving pit. Talk to Darkspear Jailor to summon the naga. Defeat it and turn in the quest.

This will most likely make you reach:

Grab your class specific quest. This will ask you to train a spell, use it a few times and then turn in the quest.

Grab [2] More Than Expected from your class trainer.

5. Go to the village to the south-east and meet up with Vol’jin who’s inside the main building overlooking the sea.

Turn in [2] More Than Expected at Vol’jin. There will be a sequence at the fireplace showing you Vol’jin’s argument with Garrosh Hellscream and why the trolls were kicked out from Orgrimmar. Accept the quest [2] Moraya

Go to Moraya on the other side of Darkspear Hold. Pick up [3] Crab Fishin’ from Tora’jin on the way. He’s outside Vol’jin’s building.

Turn in [2] Moraya at Moraya and accept [2] A Troll’s Truest Companion.

6. Go to Bloodtalon Shore and turn in the quest at Kijara. Accept [2] Saving The Young.

Pick up [2] Mercy For The Lost and [2] Consort of the Sea Witch from Tegashi who is standing next to Kijara.

NOTE: While doing the next few steps, kill crabs for Fresh Crawler Meat. You need 6 of them.

7. Swim north-west to Zalazane’s Fall and kill 8 Corrupted Bloodtalon Raptors while using your whistle when close to the raptor babies.

NOTE: The raptors do a charge and stacks up a disease which lowers your stats. The more stacks you get, the more your stats are reduced. If they get too low, wait between battles for the disease to go away. 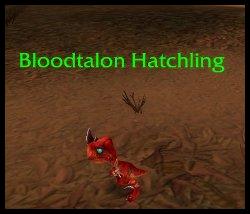 You may stop blowing the whistle when you have saved 12 babies.

8. Go up the small hill in the middle of the island where you’re killing raptors. Kill the naga Naj’tess and loot Naj’tess’ Orb of Corruption. He does a curse called Shrink which reduces your Strength and Stamina by 1.

Go back to Bloodtalon Shore and make sure to kill the remaining crabs along the way. They are in the water.

Turn in [2] Consort of the Sea Witch and [2] Mercy For The Lost at Tegashi. Accept [3] Young And Vicious from Kijara.

9. There’s a quick raptor called Swiftclaw who is running around the island. Use the lasso to capture him. Once you manage to capture him, you will automatically mount him. Keep in mind that you can’t stop him and must succesfully steer him to the pens near Darkspear Hold.

Turn in [3] Young And Vicious at Moraya in Darkspear Hold. Also turn in [3] Crab Fishin’ at Tora’jin.

10. A little bit of phasing has occured and the trolls are preparing for battle. Grab the quest [4] Breaking The Line from Tortunga outside Vol’jin’s building.

Speak to Jornun when you’re ready to go. This will automatically mount you on a raptor and take you to Spitescale Cove.

Turn in [4] Breaking The Line at Morakki who is at the entrance to the cave. He will have two new quests for you: [4] No More Mercy and [4] Territorial Fetish.

11. Go inside the cave and start placing fetishes on the spitescale banners inside the cave while killing Spitescale Naga (you need to kill 12 of them). The fetishes will actually curse the nagas and reduce their Strength and Stamina so pull the naga towards the fetishes and kill them there. 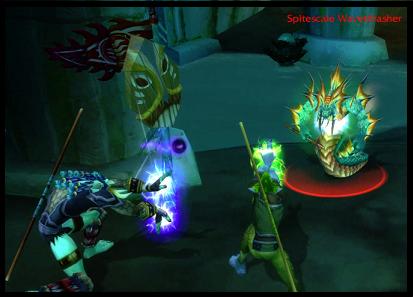 If you’re lucky enough to have the awesome hero Zuni at your side, you must make sure to tag the targets he’s fighting to have them count for the quest.

Go back to Morakki at the entrance to the cave and turn in both quests when you’re done. Accept [5] An Ancient Enemy.

12. Some more phasing has occured and you need to speak with Vol’jin who is now actually on the island Spitescale Cove. It’s time for the climax of the starting zone. You’re going to, at level 4 or 5, fight a high level boss fight together with Vol’jin! That’s right!

Speak with Vol’jin when you’re ready to fight. The naga you’re going to kill goes by the name Zar’jira and is the avatar of the ancient naga statue that has always been on the Echo Isles.

You won’t be able to fight her alone but your part in the fight will be important for the success of the quest. There’s no idling here. The boss will actually always focus on the stronger NPCs, but she will summon manifestations that will attack you. By killing the manifestations, it will deal heavy damage to the boss. Your dps will also deal damage to the boss, but don’t expect to easily be able to dps her down.

She will eventually enter phase 2 where she’ll freeze everyone (except you). You will then have to stomp out some braziers behind the boss to break the traps. The next time this happens, the handsome hero Zuni will offer to stomp out the braziers, but will die in the process. 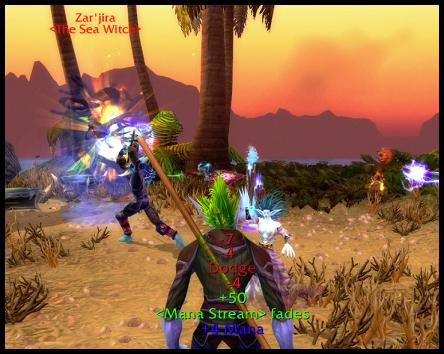 Turn in [5] An Ancient Enemy at Vol’jin. Watch the sequence in the fireplace and accept [5] Sen’jin Village.

You may now move on to Bitsem’s Durotar Guide 5-12.