In Sholazar Basin there are two factions, the Frenzyheart Tribe and The Oracles, between which you have to choose. This is kind of the Northrend equivalent to The Aldor vs. The Scryers.

In order to decide whether or not it is of advantage to you to farm reputation with The Oracles you should take a look at the Rewards section of this guide. A lot of people (including myself) find the Mysterious Egg to be crucial in their decision for The Oracles rather than the Frenzyheart Tribe. After seven days the egg will hatch and if you’re lucky you might find yourself being the proud owner of a Green Proto-Drake mount or of one out of four pets then. You can buy a new egg every seven days and it only costs you 3g.

When you start the initial quest chain you will first do some quests for the Frenzyheart Tribe and after a twist in the story you will be doing some quests for The Oracles. These lead you to a final quest which gives you the possibility to choose your faction. Said quest can always be repeated so that you will be able to switch your faction. Thus the first part of this guide is also 100% applicable if you want to choose the Frenzyheart Tribe instead of The Oracles.

Take a flight to River’s Heart in Sholazar Basin.

Get [76] The Part-time Hunter from Tamara Wobblesprocket.

Now Tracker Gekgek should have a quest for you, take it.

Turn in [77] Playing Along, get [77] The Ape Hunter’s Slave. You’ll get a wolvar as a companion who will help you a bit with the next quests.

Also get [77] Tormenting the Softknuckles from Goregek the Gorilla Hunter.

Go south-east/east to Hardknuckle Clearing (66.7, 73.6). Kill Hardknuckle Foragers and Hardknuckle Chargers on your way until you complete [77] The Ape Hunter’s Slave.

Now use the Softknuckle Poker from your inventory to poke three Softknuckles so they are running around all at the same time.

This will make the matriarch come out of its hiding and attack you. Kill it.

Go back to Frenzyheart Hill.

Make your way inside the cave until you find the Sapphire Hive Queen. Kill it and loot its stinger.

Around Frenzyheart Hill you can find chickens which you need to catch with the Chicken Net from your inventory and then right-click them. When you type /chicken they will come running to you. NOTE: You can do this quest while being mounted!.

When you have caught 12 chickens that way go back and turn in [77] Flown the Coop!.

Go south to the river below The Skyreach Pillar (58.2, 83.7). Check if you can find Serfex the Reaver there and kill him.

He’s got multiple spawn locations, so if you didn’t find him just follow the river west while looting Skyreach Crystal Formations and you should eventually find him.

Go back and turn in:

Go down the slope and you should find a Captive Crocosilisk (57.3, 68.4). Talk to it and it will carry you to Mistwhisper Refuge.

Turn in the quest at him and get the [77] Lightning Definitely Strikes Twice. Also get his quest [77] The Mist Isn’t Listening.

Start killing Mistwhisper Gorlocs while going to the shrine at (45.3, 37.1). Use the Skyreach Crystal Clusters there.

Now kill the remaining Gorlocs you need for [77] The Mist Isn’t Listening.

Turn in both quests at Zepik the Gorloc Hunter, get [77] Hoofing It.

Talk to it. You’ll be attacked by a Crocosilisk, which you have to kill. Turn in the quest. A wolvar will appear and tell you that you’re being regarded as a traitor by the Frenzyheart Tribe from now on for helping the Gorloc. This is the twist in the story I mentioned at the beginning.

Get [77] Fortunate Misunderstandings and follow the Gorloc to Rainspeaker Canopy (54, 56.6).

Turn in the quest, get:

Do circles around Rainspeaker Canopy killing Emperor Cobras and looking for sparkling stars. Stand on them and wait for your Gorloc companion to dig. When he’s finished there will appear either a Shiny Treasure (crystal, pile of gold, golden platter etc.) which you have to loot or, if you’re unlucky, it will be some bugs or a hare. If it’s a hare kill it for a 1 minute 50% speed increase buff.

When you come across the small waterfall at (57.6, 52.4) you should find Venomtip there. Kill it. If it’s not there just wait a little for the respawn.

Repeat this until you have looted 6 Shiny Treasures.

Go back and turn in the quests, get [77] Making Peace.

This is also a good time to turn in [76] The Part-time Hunter at Tamara Wobblesprocket if you haven’t already done that.

Go back to Rainspeaker Canopy and turn in the quest, get [77] Back So Soon?.

Go north to Spearborn Encampment (42.1, 25.9) and start killing Frenzyheart Spearbearers and Frenzyheart Scavengers while moving up the small hill to (41.6, 19.6) where you will find a golden orb.

Be sure to have your Gorloc companion out and right-click it to summon Warlord Tartek. Kill him and loot the treasure.

Return to Rainspeaker Canopy and turn in this quest, get [77] The Angry Gorloc.

Go east to Mosswalker Village (75, 51) and turn in the quest at Moodle. If you lost him just right-click Moodle’s Stress Ball from your inventory to summon him, get:

Look for Mosswalker Victims and talk to them to check their pulse. If they drop a bag, loot it.

After you rescued six of them just keep following the road below Mosswalker Shrine to the south-west and collect the remaining Lifeblood Shards.

When done with that turn in both quests and get [77] A Hero’s Burden.

This is the final quest in this long quest chain that will enable you to choose whether you want to be helping the Frenzyheart Tribe or The Oracles. This quest is the repeatable one I mentioned earlier!

Head to the cave (69.9, 58) east of Lifeblood Pillar and enter it. Fight your way to the end where you should find Artruis the Heartless. Depending on your gear, you’ll probably need at least one or two helpers to kill him. In the middle of the fight he will stop attacking you and free Jaloot and Zepik the Gorloc Hunter. Now kill the member of the faction which you do NOT want to choose, say if you want to choose The Oracles, kill Zepik the Gorloc Hunter. Finish the fight and complete the quest to become honored with the faction of your choice.

You can start doing your dailies right away. So return to Frenzyheart Hill or Rainspeaker Canopy.

NOTE: If you, at any time, change your mind and decide to switch your faction, just come here and kill Artruis the Heartless again. You will be able to re-choose your faction then.

When you have finished the initial quest chain you will be able to complete three daily quests to further increase your reputation with the Oracles. There are three quest-givers located in Rainspeaker Canopy (53.8, 56.5):

After taking this quest talk to High-Oracle Soo-say and choose one of the three Gorlocs to help you (you can always change this later). It doesn’t really matter which one you choose, although Jaloot will give you Jaloot’s Intensity, a 10% speed and 100% swimming speed increase buff. You’ll get an item with which you can summon and dismiss your Gorloc.

Your objective is to use the Chime of Cleansing to summon three spirits at certain places and kill them:
[list]

Your objective is to use the Horn of Fecundity at The Stormwright’s Shelf (25.6, 36.3) near 8 piles of Soaked Fertile Dirt.

Your objective is to use the Didgeridoo of Contemplation at the four pillars in Sholazar Basin:

Sometimes you have to fight some cultists there. 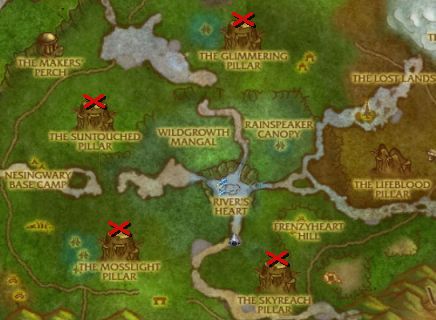 Go to The Stormwright’s Shelf (25.6, 36.3) and use the Drums of the Tempest there to become Haiphoon, The Great Tempest. You now have 3 abilities which are pretty self-explanatory. Use Ability #1 to deal damage, Ability #2 whenever your enemy comes into melee range and Ability #3 once your enemy is below 30% health.

Oracle Soo-dow (54.2, 53.7) is inside the big tree.
He offers 1 out of 3 quests randomly chosen every day. Each of them awards you 700 reputation.
NOTE: These quests are not turned in at the quest-giver but at Lightningcaller Soo-met (33.5, 74.9) at Sparktouched Haven.

Crystal of Unstable Energy (green one): single-target damage, one-hits those wolvar
Crystal of the Frozen Grip (blue one): very much like the Hunter’s Frost Trap effect
Crystal of the Violent Storm (white one): AoE damage like the Druid’s Hurricane spell

Once you’ve completed each of the 8 daily quests you’ll get the Achievement Savior of the Oracles.

And once you’ve reached Exalted status with The Oracles, you’ll get the achievement The Oracles.

You can find Geen (54.6, 56.1), the Oracles Quartermaster, directly next to High-Oracle Soo-say (next to the small stone pillar) at Rainspeaker Canopy in Sholazar Basin.