Grizzly Hills is only 2nd in line to Wintergrasp in the case of Northrend PvP. This guide is devoted to that.
Grizzly Hills has 3 designated PvP zones with daily PvP quests and rewards. This guide is going to take you through the fastest way possible, to get that stuff outta the way! =P 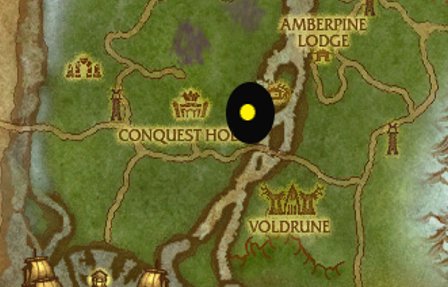 Kill 10 Alliance players or NPC’s on the island. The Orcs will help if you need it. 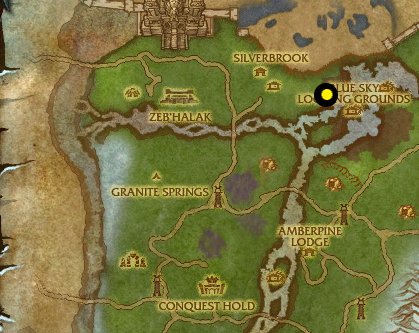 This is our second destination in this day, and in my opinion the easiest.

Head to the island southeast of the camp.

Once you have all 4 quests complete, turn them in. 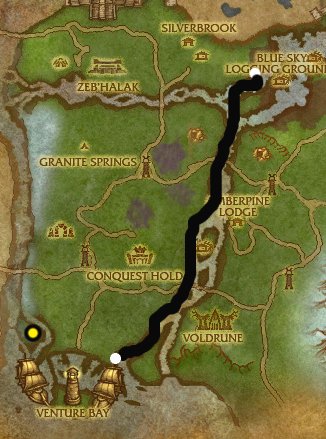 Find the NPC on the same level as the Horde quest givers, he’s standing on a platform next to a “waterway.” (Sort of shown in pic)

This may say “You are busy” just keep trying until you are riding a log down to Venture bay. It took me 12 tries my first time.

This is the largest of the PVP hubs with a captureable area in the center (the lighthouse) that offers the daily quest Riding the Red Rocket if your faction controls the area. If you have control of the lighthouse you also get access to the Venture Coin rewards vendor. Here you will do the daily PVP quests Smoke ‘Em Out, Keep Them At Bay,and Crush Captain Brightwater!.There is also a non-daily PVP quest here – Seeking Solvent – that turns into a turn-in quest Always Seeking Solvent after you complete it. 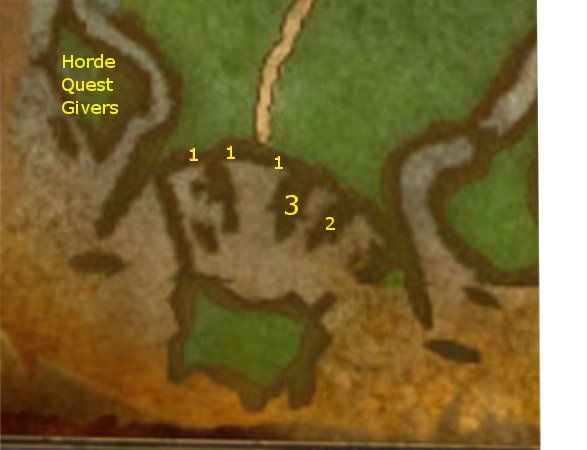 Kill every Alliance mob (or player if you prefer) on your way to the closest building with Venture Company Stragglers.

Once here, use the Smoke Bomb

After clearing that house you should have 5-7 of the 20 you need complete.

Head east (killing Allys still) to the next house.

Use the Smoke Bomb once again.

At this point if you don’t have all 20 there’s one more house just to the east.
You should be done with Smoke ‘Em Out.

Now head south to the dock.

Go to the easternmost ship.

Head to the middle ship.

Now you’re going to clear the ship to the last room.

Pick it up and you’ll get a debuff that increases damage taken by 35% and doesn’t allow you to move faster from mounts or any other buffs.

Run back to camp avoiding fights and turn in all the quests. (assuming you killed 10 allys around the area.)

If your faction has control of the island, you can do Riding the Red Rocket. For this quest you need to go back to the middle ship and take the Element 115 to the dock at the end of the island. Mount on the rocket.

This is in my opinion one of those games you saw in an arcade in 1987. You have to go south for about 5 seconds then go east, avoiding icebergs, and run into the Ally ship docked on the edge of the island.

Note, this is not one of the boats we’ve been to before, it’s east of them. And if you crash into an iceberg you have to go back for the Element 115 again.

After you do all of these quests (assuming you aren’t 80 yet) You’ll get 5 or 6 gold each, along with 20k XP each, for a total of nearly 200k XP per day. Thats not bad. Continue to do this while leveling to 80 as you get a good amount of Venture Coins That you can turn in on the controllable island at Venture Bay for rewards. The complete list of rewards is here. Plus a lot of XP!

Also, if your looking for a good World of Warcraft podcast with Blizzard news, rumors, facts, patch information, and everything else you need, check out The Instance, my personal favorite. It has also won an award for best gaming podcast! I highly recommend it. You can find it on iTunes or here