Criticising Final Fantasy VII is nearly enough to start a war in some corners of the internet where devoted fans pour over every detail of the acclaimed game and marvel in its magic.

Final Fantasy VII is widely considered a gaming classic, one of the most revered video games of all time. But we are here to show you all that maybe, just maybe, it’s not as perfect as you might think.

Here are seven problems with the game – some may seem minor, but in a world of unrelenting standards, they combine to downgrade the Final Fantasy VII experience.

So, in no particular order, let’s get started!

The Tifa Vs Scarlet Fight

Final Fantasy VII is known for its positive and ground-breaking portrayal of female characters. Still, it was created by an overwhelmingly male team of developers and designers at the end of the day.

It’s unlikely they were deliberately sexist, but there are numerous moments in the game that could really have benefited from a female touch. 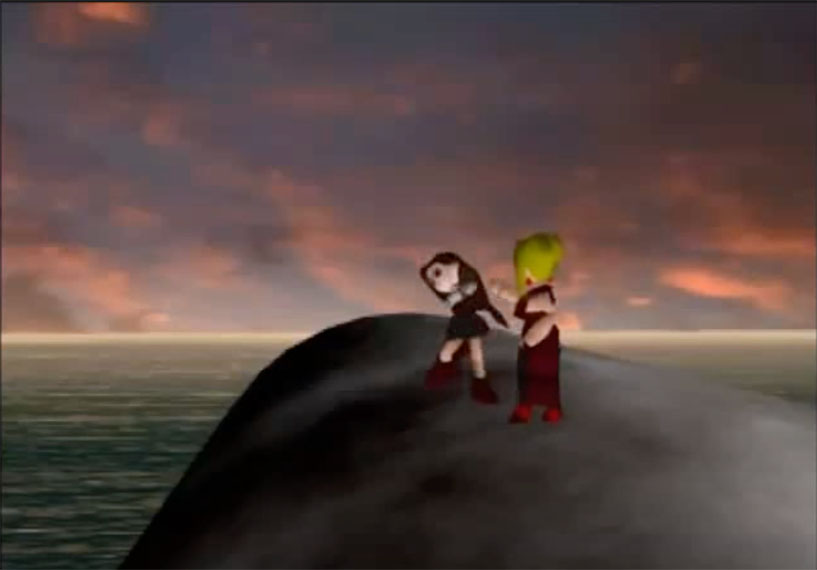 None more so than the big fight between characters Tifa and Scarlet. We know Tifa is a brilliant martial arts competitor with incredible levels of strength. In the other corner is the enemy, Scarlet. She’s a ‘normal’ woman but has access to a whole load of firepower.

So, why, oh why, does the fight descend into some embarrassing slap fight? Sure, the game developers maybe wanted to add comic relief, but this doesn’t seem the right place to do it. The effect is, well, just a little embarrassing.

The Treasure Chest in Kalm

Game glitches are nothing new, and sometimes they add unexpected dimensions to the game. But the treasure chest that appears in one of the buildings in the town of Kalm is just downright annoying. 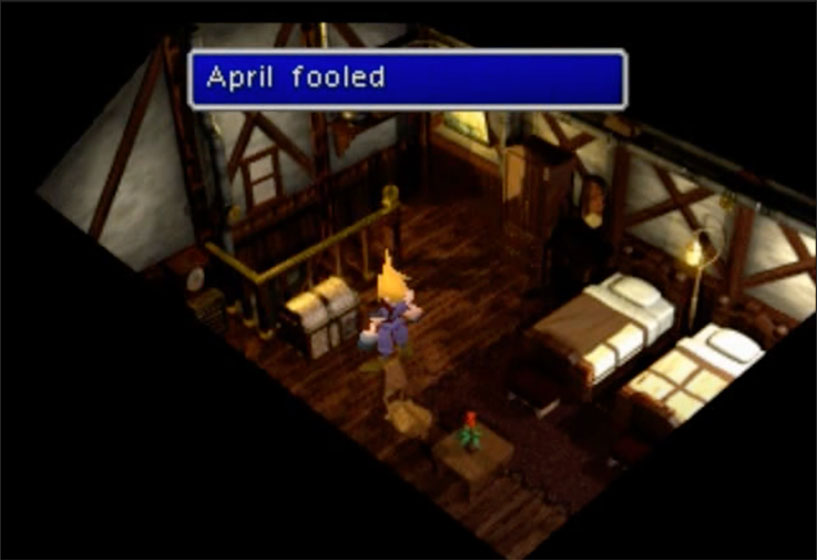 Fan boards were alive with the long-rumoured secret that whatever was inside the chest may even be capable of reviving Aerith.

But alas, no. It’s just a leftover item from a never-finished quest that the developers didn’t get rid of. The chest isn’t even a proper chest. It’s just a static image, which means no one could even hack into it.

A disappointing time thief for players.

There are several issues around the death of Aerith. No blood for one, despite a brutal sword blow. While the scene where Cloud silently releases Aerith’s body into a lake is a real tearjerker and an iconic moment in video gaming, closer analysis highlights one big flaw. 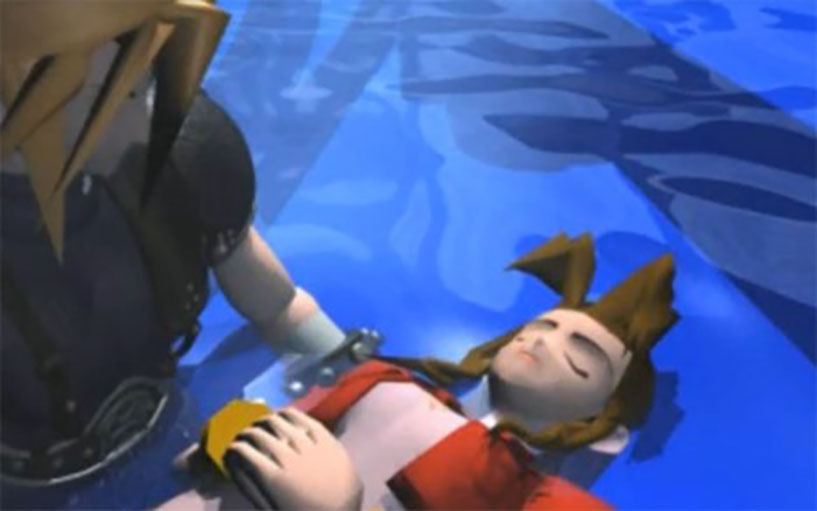 Cloud can stand in the same bit of water as where he lets Aerith’s body sink deeper and deeper. Something’s not right there. Either Cloud has incredibly long legs all of a sudden, or the animators got this bit wrong.

Go check it out, as once you see it, you’ll never be able to forget it.

The Silliness of the Great Glacier

The pursuit of Sephiroth leads the game’s protagonists to the Great Glacier, the coldest place in the world. So cold that we must mash buttons as fast as we can to keep Cloud and co. warm.

We’re told it’s well below freezing, yet our friends are wearing the same clothes as usual. This is particularly stupid when you consider Cloud was at the small town of Icicle Inn before the climb started. 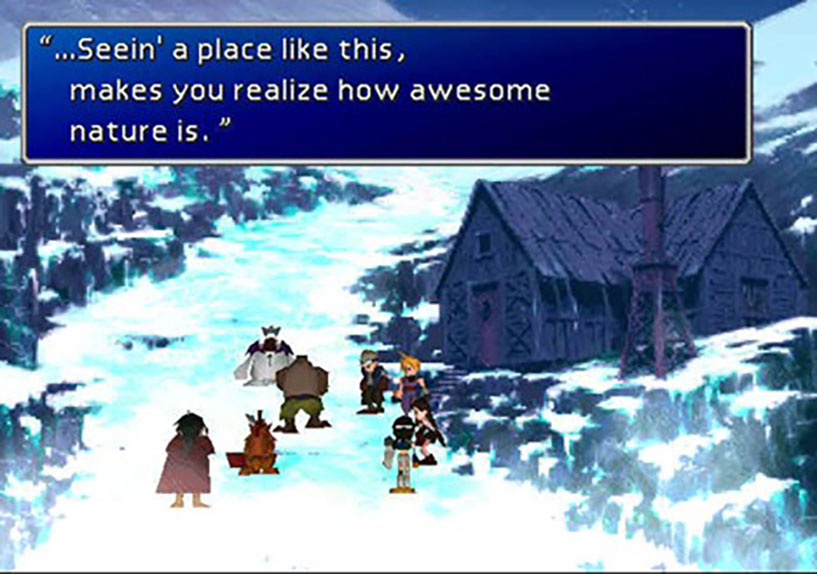 Surely a good time to buy some appropriate clothing? A minor flaw in the scheme of things is probably explained by the developer’s not wanting to create new character models and graphics for any change of clothing. But it still stinks.

But in Final Fantasy VII, we are fighting against all sorts of odd enemies with no explanation given to us about how they came about.

I mean, there’s a house monster! What is a house monster? Is it a possessed house? Or a monster that has taken on the appearance of a house? Whatever the answer is, it’s bizarre.

With the seventh edition, the developers should have understood their game series was a truly global success. And so, more care should have been taken with the translation and localisation of the text.

Perhaps the biggest detraction levelled at the game is the many spelling errors, grammar failings, and the failure to localise texts properly.

Of course, there are far worse translations from Japanese in video games and online casino, but that’s not an excuse for a game that positions itself as the best. We wonder why Square Enix has never issued an update with better translations as they have done in the past with other releases.

And it’s not just English that’s problematic. Spanish is a lot worse. The gendered language leads to frequent misgendering of characters and the famous literal translation of ‘Party’ (referring to the party members) as ‘Fiesta’ (meaning party, as in birthday party!).

The translation issues bring us neatly on to arguably the most significant mistake and source of ongoing controversy to this day. Is it Aerith or Aeris?

The translation from the original Japanese name, pronounced Earisu, should be Aerith, according to most. But the game went with Aeris, only to revert to Aerith in subsequent Final Fantasy releases.

That should have settled the debate, but fan forums are full of people clinging to Aeris. Yes, they are wrong, but making such a muddle with one of the central character’s names is unforgivable from the developers.