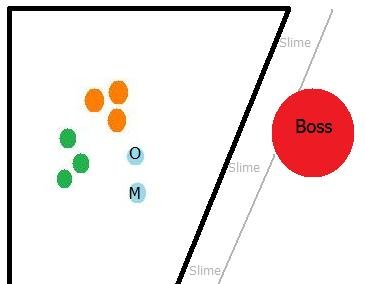 Patchwerk is walking along the green slime. The offtank will need to keep his threat at about 60-80%. The maintank will have to tank him in the slime and the melee DPS’s should not stay in the slime, if they do, they well get hit by a DoT and hp will be reduced by 50%, so for the tanks, it’s even more important to not stand in slime. 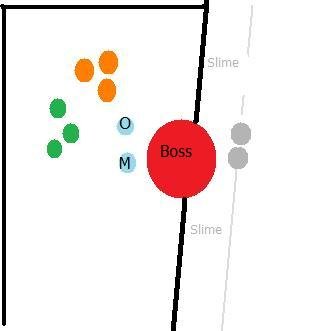 When the boss shows up from the north (on the picture), wait untill he stops. Then pull him, and melee DPS’s should run behind him and DPS from there. This is far the best example of a tank’n’spank boss in the game imo. The boss will hit the one that got aggro, and the one with the highest threat. Make sure this is should be the other tank! The boss will also do *Hateful strike* which hits for around 6,000 damage on tanks, so not only DPS and tanks need to focus, also healers will get work to do.
The boss will break into an enrage after 6 minutes fighting. With a basic setup (2-3range DPS’s, 2-3 melee DPS’s) it never happened to me that we reached the enrage timer. He will also go into a frenzy when he reaches 5% HP. Tanks and healers should try to save cooldowns for this. 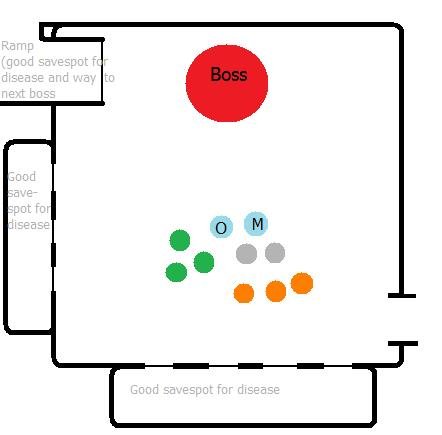 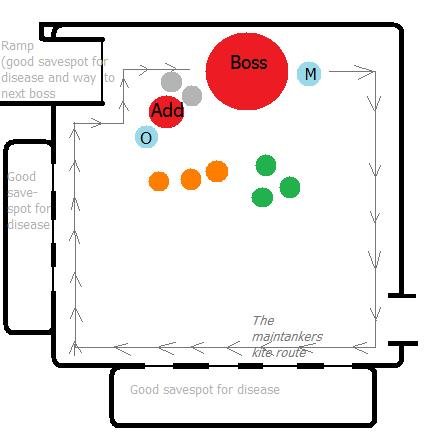 This Fight is easy if you follow three simple rules:

So what is basically going on in this fight is:

Keep this up until the boss is dead.
This boss should be easy enough on a few tries, but he can be a little tricky at first.

When you’re done with Grobbulus, you will have to run upside the ramp, and inside the entrance. Be careful when on the tube, it’s easy to fall and you have to run again. When all are buffed and ready, run through the sewer with the maintank in front and wait with DPSing untill the tanks are in position. 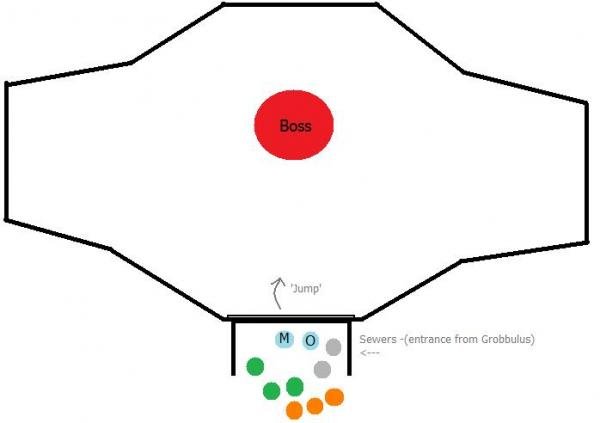 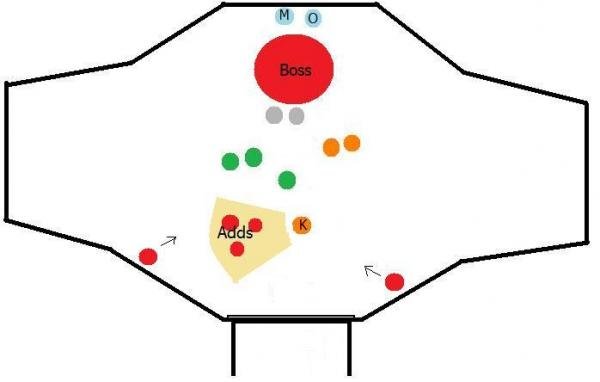 The maintank and the offtank are facing the boss at the end of the room. The boss will cast *Mortal Wound* every 10-15 seconds, which reduce all healing taken by 10% and stacks up to 10 times. When the maintank got three of these marks, the offtank taunts him. When the offtank got three marks, the maitank taunt him back. Follow this process until the boss is dead. The DPS’s will just have to max focus on their DPS in this phase, except the kiter. The kiter (marked as a K on picture) need to pick up the adds which is spawning from 2-3 rifts on the ground every 10 seconds in the back of the room. These zombies/adds doesn’t hit for much damage but are stacking *Infected Wound* on you which are increasing damage taken by 100. The kiter will have to take care of these zombies. Every time a zombie spawns, the kiter get the aggro of it, and run around with it. Note that the adds should NOT be close to the boss. If they hit the boss it will increase his Hp by 5%. So 2-3 adds will probably mean a wipe for the raid group (if they hit Gluth). The zombies can be slowed, chilled, stunned etc. Mage is the best choice to be kiter. They got Cone of Cold, Blizzard, Blink etc. In particular if the mage is frost specced. Next choice will be a hunter with the slowing shot, Multi-shot, Volley, Traps etc. But also a warrior specced into Piercing howl works, and I’ve also seen a paladin doing the kiting however I don’t how, and a elemental shaman with Earthbind totem and Thunderstorm will probably also be able to do it.
Last ability to worry about is the Enrage. Sometimes, the boss will enrage, increasing his attack speed by 25% for 8 seconds. Hunters can use Tranquilizing Shot and Rogues can apply Anesthetic Poison II to their weapons to remove the Enrage. 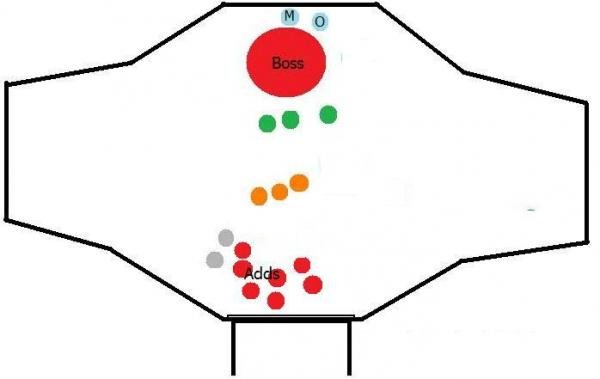 Every 105 seconds the boss will use *Decimate* it reduces everybody except the boss HP to 5%, including the zombies. It’s very recomended to have Deadly Boss Mod or BigWings so the healer will be ready to cast a heavy heal before *Decimate* to replace the HP lost by *Decimate* on the tanks. When the boss uses *Decimate* ALL DPS’s including the kiter will have to kill all the zombies before they hit the boss. The zombies will not attack, but they will go directly to the boss with no threat. It’s very important that the kiter got the zombies close to the sewers (entrance) so the DPS’s will get more time to kill them because the zombies will have to walk longer. The tanks will still have their three marks shift during Phase 2 . When all the adds are dead, it’s back to Phase 1.

The boss also got an berserk timer on 8 minutes increasing Gluth’s attack speed by 150% and damage done by 500%, wiping the raid quickly. The berserk will happen shortly after the fourth *Decimate*. If no zombies hits Gluth you will probably not hit the berserk timer. 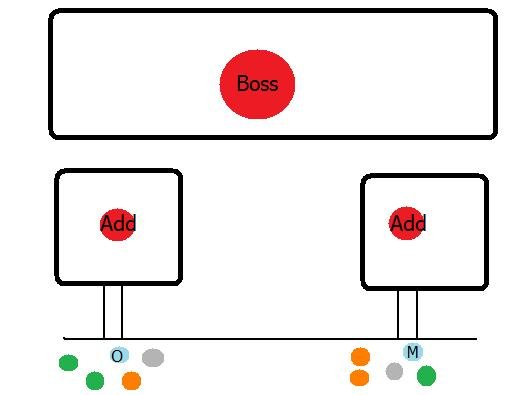 The raid group will be split up in two parts. To the left you will have the two strongest DPS’s, two healers and the offtank. To the right, the rest of the group (3 DPS.One Healer. Maintank). When all is ready the tanks are to pull the two adds at the platform: Stalagg and Feugen.
Before pulling, you should be sure that all that don’t know this fight should practice the ‘jump’. The ‘jump’ is when you have killed Stalagg and Feugan and have to jump down to Thaddius. It’s prefered to switch into movement speed bonus auras (Unholy Presence, Aspect of the Pack etc.) before jumping. To practice the jump you can jump to the platforms next to the entrance. 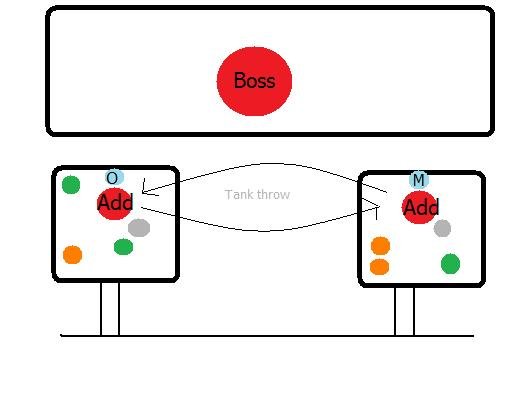 When you feel that all are ready to jump; pull the adds (maybe make a count down so the other tank is ready). Pull the adds to the north edge and keep them there. Now, it’s just tank and spank the adds down. The group killing Feugen will pretty sure kill him faster than the group that is killing Stalagg. The bosses have to die within five seconds of each other, so make sure they are dying at almost same time. If not, they will both respawn with full HP. Also note that the adds most NEVER leave their platforms or you will receive massive damage. Sometimes, the adds will do a *tank throw*, the tanks will switch side. 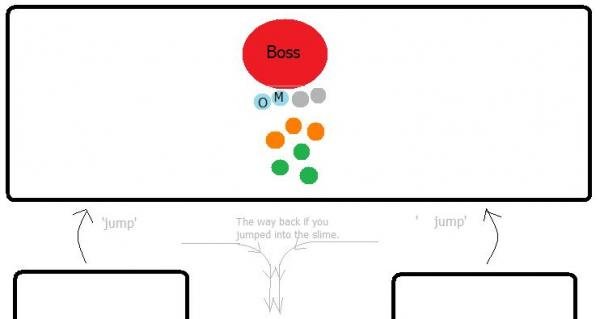 When the adds are dead, then make the jump. The trick is to be very close to the edge, but don’t fall. If you miss and fall into the slime, all the thing you have to do is to run back and try again. When you’ve jumped go to the front of the boss (if you missed and the boss already started once you arrive at the second try, go in front of him until he will cast *Polarity Shift* See below;)) 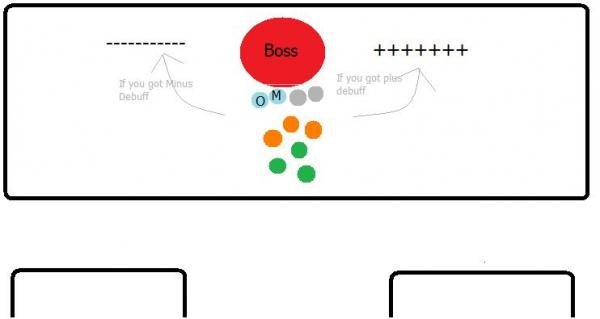 Keep DPSing him in front of him until he will cast *Polarity Shift* and you’ll have to run to one of the sides of him. If you got a minus debuff go clockwise to the left of the boss. If you got plus debuff go to the right of the boss. Apart from the first *Polarity Shift* where you may you have to go to the right, you should always run clockwise around the boss when he casts *Polarity Shift*. Remember to fight at max range (melee, offtank, maintank) or you will die. Ofcause also counts for ranged DPS’s and healers. Thaddius also got an enrage timer on 6 minutes.
Else keep the healings up, Thaddius got some AoE attacks that need to be healed, keep it up! 🙂