I am working on a new module for the WoW-Pro addon called WoW-Pro Dungeons, that should provide the framework for guides and information related to dungeons in World of Warcraft. Right now, the WoW-Pro Dungeons is still in its early alpha stage, but I decided to create this page to explain my own design ideas and to hear feedback from the community (especially those that are in the beta, since I’m not).

That way, if we decide to change something, I won’t waste too much programming time. 🙂

WoW-Pro Dungeons will make use of the WoW-Pro Guide frame, showing steps and information in a similar way, that happens now, with the WoW-Pro Leveling module. Because of this, only one module will be active at a given time, but there should be plenty of options for the player to switch between them, manually or automatically (more on that later).

But there are important differences between leveling and dungeon guides:

Therefore, unlike WoW-Pro Leveling, WoW-Pro Dungeons should allow access to different types of guides, for each dungeon, from the more basic to the more lenghty. For another hand, the dungeon guides should follow, as much as possible, the format of the WoW-Pro Leveling guides, to not confuse guide writers and players.

The types of guides, for each dungeon, I’m thinking of are the following:

Once I get the addon in a more stable way, I’ll provide at least one guide of each type, as an example, and also some instruction on writing dungeon guide for the addon. Again, the format should be quite similar to the Leveling guides, but not completely. 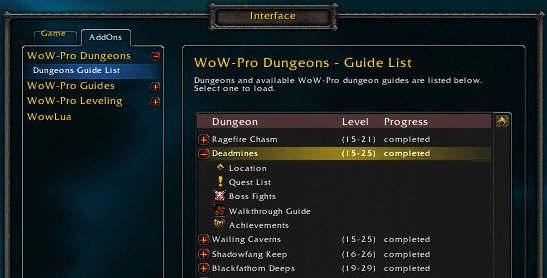 If you have any suggestion/info on the following topics, please post in this thread.