This isn’t really a conventional guide, its merely a checklist/database in which you can make a lot of gold by doing dailies, and using your gathering proffession to get cash. If you don’t have any gathering proffessions you can farm some Eternals. When farming I would recommend listening to some music you enjoy to make it not seem like a chore.

We are going to start off making some guild with some good old dailies. I am assuming that you have unlocked all of the dailies in Icecrown. Let’s start with Icecrown.

Head to the Krasus Landing in Dalaran. Once there talk to Sky-Reaver Klum, click the ”Take me to the ship.” option. Once at the ship pick up the following dailies:

1. Fly to the Broken Front. Now we are going to start looking for Piles of Bones, Abandoned Armour, and Abandoned Helms. Once you have 1 of each use Copperclaw’s Volatile Oil. Do this three times.

2. Kill Hulking Abominations untill you have Chilled Abomination Guts. (If you have a pet dismiss it now). Use the Abomination Reanimation Kit and kill 15 Icy Ghouls, Vicious Geists and Risen Alliance Soldiers. (When he explodes get some more guts by killing more abominations.)

4. You should have now landed in Ymirheim. Now start killing Vrykul on the way to Blast Thunderbomb (51,57) for Blood of the Chosen. Get King of the Mountain from him. Go to the top of the mountain and plant the banner.

5. Now make your way to the Saronite Cave. Keep talking to Saronite Mine Slaves untill you have rescued 10. (Be warned they can either run out, kill them selves, or attack you.)

Make your way out of the cave and keep killing Vrykul untill you finish Blood of the Chosen.

6. Go North to a cultist camp at (55,44). Start killing Bitter Initiates then use the Orb of Illusion they sometimes drop on the Dark Subjugator. Do this 3 times.

7. Fly North to Aldur’Thar. Drink the Diluted Cult Tonic and start killing Void Summoners and Enslaved Minions. Use the Rod of Siphoning on the dead minions for the Dark Matter. (Remember to refresh the buff every 10 minutes.)
Stay here untill you have 10 Tainted Essence and 5 Dark Matter.

9. Now go west to (48,34). Click on the Essence in your bag to form a Writhing Mass. Throw it into a cauldron. Each cauldron gives you a certain buff.

2. Fly South-West into Jotunheim. Go to (27,39), mount onto one of the stationary Proto-Drakes. Now ride around burning house roofs. Once you have burned 10 dismount and start killing Vrykul and planting their corpses with the Ebon Blade Banner.

3. Go to (32,24) and choose a Harpoon. Use all 10 harpoons as fast as possible on a Rider. Dismount the Harpoon and go to a new one and repeat this strategy untill the quest is done.

5. Fly to the Onslaught Harbour. Mount the Gryphon in your bags and start killing Gryphon Riders untill this quest is done. Then fly to the beach at (6,39). Kill members of the Scarlet Onslaught. Loot them for their keys and use the Darkmender’s Tincture on them. Also open chests for the Intel. Stay on the beach till you finish these two quests.

6. Fly back to Death’s Rise turn in all the quests.

7. Fly back to the Shadow Vault and turn in everything.

8. Fly back to the ship and turn in everything.

1. Fly to K3. Get the Daily Quest Overstock . Go North-West to around (43,81) in Garm’s Bane and lay down the Improved Land Mines. Make 12 Garm Invaders go boom. Return to K3 and turn this in.

2. Fly to Brunnhildar Village go to Gretta the Arbiter, get the Daily quest she offers, they are possible from this pool:

Do the Daily Quest which you got from the list first, and turn it in (They do not need an explanation on how to do them).
All the Brunnhildar Village Daily Quests have a chance to give Reins of the White Polar Bear.

3. If you got The Abberations Must Die fly to Valkyrion and kill Valkyrion Aspirants for their Vials of Frost Oil untill you have around 4. Then go to the pit with the Plagued Proto-Drake Eggs in it and aim for destroying the 7 and 8 egg group first, repeat this untill you have completed this quest. Now fly back to Brunnhildar Village and turn in the quest.

4. Now we get to the the Sons of Hodir quests. I will simply be listing the quests, what reputation is required, and what to do for them. You can do them in whatever order you wish as sometimes some objectives can be crowded. What daily quests are available depend on your Reputation. Whenever you reach a new level of Reputation Standing, be sure to check around the village to see if any new one time quests have popped up. Completing them will unlock the dailies for the respective Reputation Standing.

Now we can do some farming to make even more money. You can also get money by selling Titansteel Cooldowns. Here are the routes I take mining:

(Highly recommend Sholazar, may face some competition from others, but plenty of ore here for you to mine.)

(Great area to get some mining done, be wary of stiff competition and mobs getting inbetween you and your ores.)

Now we can do some farming to make even more money. The best Herbs to gather to sell are Icethorn and Lichbloom and these are found in the following zones:

(Great area to gather some Herbs, be wary of competition and mobs getting in your way.) 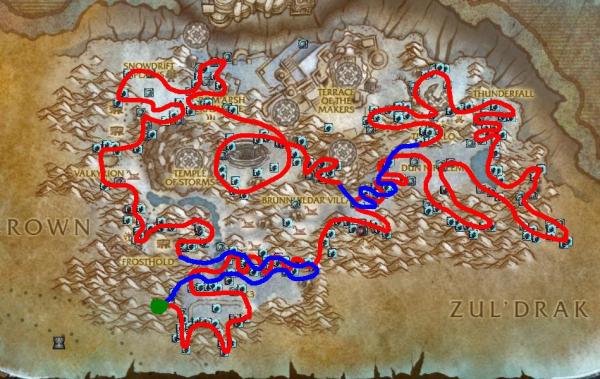 (Taken from Tribe on this site.)

Skinning does not usually net me any more money, considering nearly all leatherworkers are skinners. How ever, it can net some income, here are some places to farm speciality skins: (Borean Leather comes from all monsters.)

This is the BEST place for farming some Icey Dragonscale, very high drop rate, mobs are push overs,

This cave has very fast spawning Jormungar with high drop rates on their Scales, there are also some Worgs here that may get in your way.

These low level Spiders will be extremely easy to kill, are in extreme abundance and have a high drop rate.

Random drop from anything that you skin, recommend farming it with one of the other specialty skins above.

(Credit for pictures and information in this section goes to Shikamaru for compiling his guide found over here.) I have chosen not to include any areas inside Wintergrasp as the zone is usually full of others farming, and you will get ganked at some point, and some times you won’t even control it. 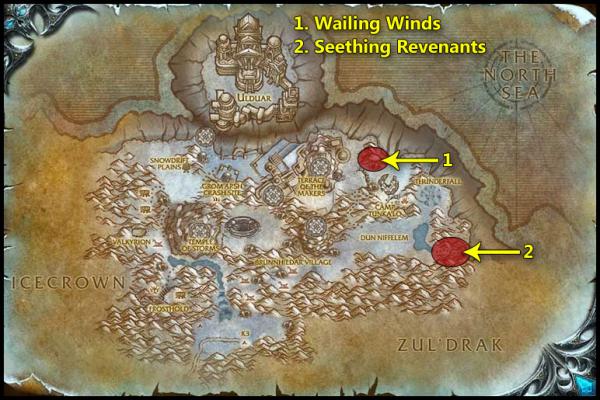 Your targets are Seething Revenants and Wailing Winds they drop Relics of Ulduar which can be used for your Sons of Hodir reputation standing. 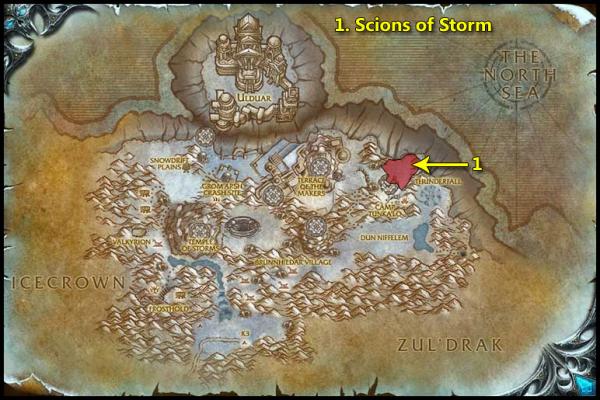 This place is basically untouched, every time I have been here I have not seen another player. Around a 30% drop rate on the Eternals.

Eternal Life
(Unusually annoying to farm if you aren’t a herbalist.) (If you absolutely need these Eternals you will probably be better off buying them straight from the Auction House.) 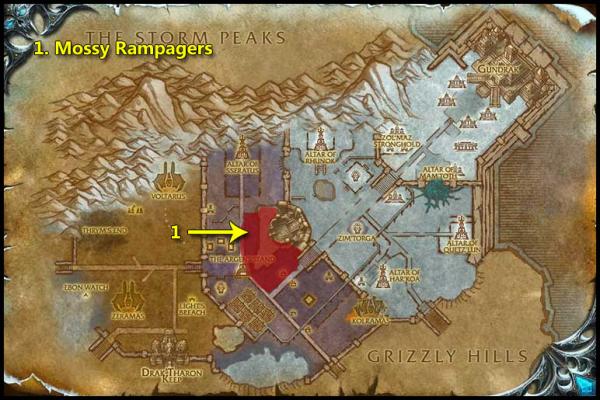 The Mossy Rampagers are spread out, but they still have a nice 30% drop rate.

Eternal Water
(Can be found from mining Cobalt Ore and Titanium Ore. Can also be fished.) 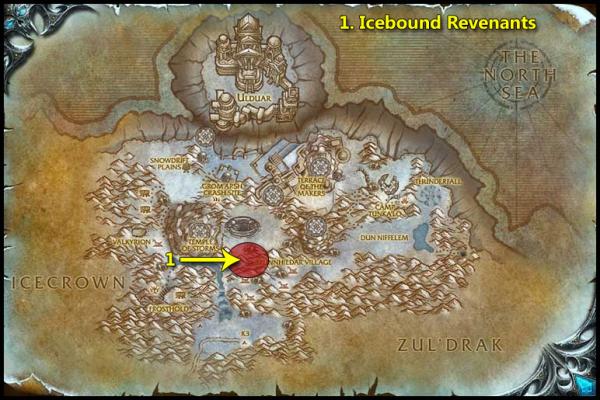 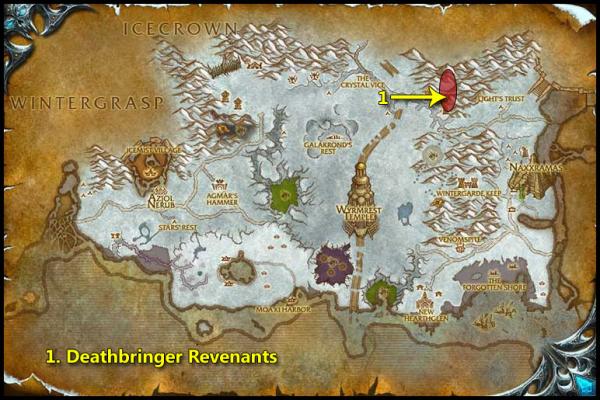 Around a 25% drop rate, pretty much barren every time I’ve been there (Primetime).

5G an Eternal? Not worth your time.

That is all for now, hopefully this will help you buy that Epic Flyer or amass that Fortune you always wanted. I will be adding a section on playing the Auction House in the coming week.