Journey from Stranglethorn Vale to Hinterlands

This guide will take you from level 41 to level 50 in a breeze, but you can actually start with it at level 44 for example and catch up with the guide really quick, it’s not an issue. I suggest you read the basic rules and recommendations I listed in the Chapter I of my leveling guide if you haven’t already. No matter if you are a beginner or a veteran world of warcraft player, if you follow this guide carefully you’ll find yourself XP’ing at an hillarious rate. So please give it a try and then say how it went for you!

So here we are -13 quests to deal with. Let’s get busy! Make space in your bags, repair and buy 2 stacks of food/drink (if you don’t have that already, of course).
For those who didn’t finish the Stranglethorn Pages yet: this is your last chance, check the Booty Bay AH and ask in general channel for missing pages. If you got them all, take them with you.

When that is done, get back on the main road and go north until you reach (39,41), slightly long ride.

** From this point on, if you find any Shadowmaw Panther (they are stealthed) make sure you kill them **

At (39,41) go east and you will find Venture Co. Goblins uphill. Kill them until you get 10 Singing Blue Crystals.

Then go northeast to (36,35) and kill Shadowmaw Panthers until you got 10 kills. You can find them in the area all around that big hill next to the tribal leatherworking troll NPC. They can be a bit hard to find sometimes because they are stealthers so I suggest you hit “Tab” key while running around and open your eyes well (humans use your racial ability perception). Keep doing circles around that big hill and you will find 10 panthers quickly. Kill anything on the way too while searching those panthers.

Go east to Ziata’Jai Ruins (42,36) and clear the camp of trolls. Be careful to avoid the patrols. When it’s cleared, follow the little path northeast until you reach Balia’mah Ruins (45,33). Kill all the trolls there as well. When this camp is clear, follow the path southeast and then south until you reach the ruins of Zul’Mamwe (47,38 ) and kill all the trolls you find in the ruins (Though avoid the southernmost one up the plateau, the trolls there are higher level)
If you run out of trolls go back to the first ruins of Ziata’Jai and repeat this cycle until you get 18 Skullsplitter Tusk and level 42, this is a good grinding spot.

Note: This one without any XP bonus, and it could have been better, I died twice stupidly at Jon-Jon the crow. 🙄

Repair, sell and refill up to 3 stacks of food/drink.

Now you have two options:

1. Do the Uldaman instance, I suggest you follow my Uldaman Instance Guide for maximum XP rate. Try to finish the whole instance ,and especially completing the quest [47] The Platinum Discs
2. You really don’t like Uldaman, then go to the next part of my guide, but that will mean more grinding for you. I strongly advice you to go to Uldaman though, you already have most of the pre-questing done, just need to gather a few missing quests quickly. And trust me, there will be big exp bonuses later on thanks to going to Uldaman.

Sell, Repair, buy up to 4 stacks of food/drink. 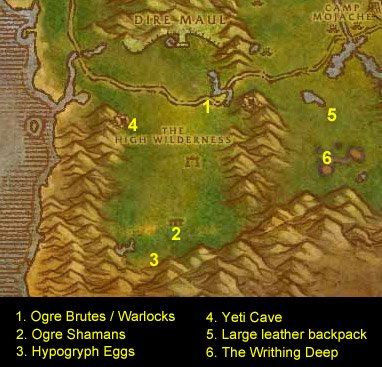 1. Go east across the sea, back to Feralas, follow the road east until you reach Ruins of Isildien (61,53). Kill ogres there until you have killed 8 Brutes and 8 Warlocks.

2. Then for the Ogre Shamans you will have to go much further south to the big temple at (59,73). Keep doing circles around the temple until you got 8 Shamans dead (there’s also shamans inside the building, sometimes you gotta kill the placeholders for them to respawn).

3. When you are done with Shamans, go further to the south and as far up the hills as you can, you will find Hippogryph Eggs on the floor at (56,76). Get a Hippogryph Egg.

Now, at this point you should normally have gotten a Distress Beacon with all the stuff you’ve killed in Feralas already. If you don’t, it’s not a big deal, just go to the next step. For those you did get a Distress Beacon, right click it to get the quest [45] Find OOX-22/FE! if you haven’t already. Turn in the quest.

5. Go back to Feralas, follow the main road east until (71,48) you should be directly north of the small lake. Go to the southeastern tip of that lake and a bit more to the south try to locate a small gnoll camp next to a huge tree. (73,56). Clear the camp and look for “Large Leather Backpacks” hanging at the trunk of that huge tree. Click it and get the follow up quest [46] The Writhing Deep.

Also check your inventory for a bag named “Undelivered Parcel”, click it and start the quest [44] Thalanaar Delivery.

6. Go further south to the Writhing Deep and find the hole at (74,63), go down the spiralling ramp until you reach the bottom. There enter the tunnel towards the west, inside the tunnel at the first fork go to the right. At the end of this corridor you’ll find a circular room with the Zukk’Ash Pod inside. Clear the insects in the room. (if you are lucky, “Qirot”, a rare spawn insect will be there. Kill it for and extra green item). When the room is clear, click the Zukk’Ash Pod, complete the quest, and after Raschal the Courier is done with his speech, warp back to Feathermoon Stronghold.

Turn in all quests and get the follow ups:

Go to Shandris Feathermoon, turn in [46] A Hero’s Welcome and get the follow up [46] Rise of the Slithid.

If you are not level 46 at this point, go grind on pirates until you hit 46.

Note: The XP counter started when I arrived in Gadgetzan and turned in “the borrower” quest. No XP bonus, I think the numbers speak for themselves.

If you don’t have the beacon, you can come back later when you get one. But of course now is the most efficient time to do it, cause it’s on your quest path 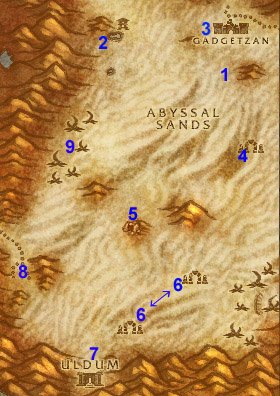 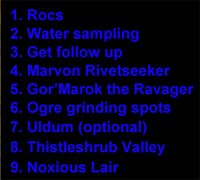 It took me just 2 Hours with a crapy pick-up group for a huge XP boost.

If you really don’t want to go to Zul’Farrak:
You can abandon the quests related to it and go grind up to level 49. (Because those who go to Zul’Farrak will ding 49 from turning in the quests even if they don’t do all the quests, Gazh’Rilla and Troll Temper namely)
You can grind either in Feralas on Yetis or on Harpies (good for Darkmoon Faire Tickets). You can also grind on ogres in Tanaris if you prefer.

These buffs will help you killing faster, they do not stack, so wait for them to fade before you get the next one. Make good use of them