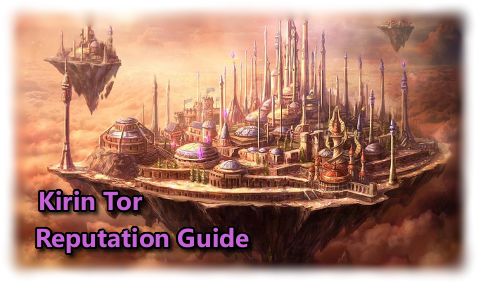 The Kirin Tor are a sect of wizards, stationed in Dalaran, that study and record all of humanity’s magic and artifacts. They are also charged with the protection of the city, but once failed to prevent Archimonde from destroying the city, under rule of Prince Arthas, who was summoned by defected Kirin Tor member Kel’Thuzad. The remaining members of the Kirin Tor were determined to salvage the ruins and rid the city of the remaining undead and reclaim their once magnificent city. The members of Kirin Tor are now cautious about who is let into their organization in fear of more defections.

Hey! Thanks for visiting this guide. In it, I’ll summarize the Kirin Tor Faction, how to gain reputation for it, and the rewards you get for doing so. Any feedback, such as catching a mistake or suggestions, in the form of comments is welcome. I will make an effort to reply to every single comment, even if it’s just to confirm I read it.

So, you’re in Northrend and want to be friends with the biggest local mage group. But, how? Good news is, if you’re a mage, you’re already friendly with them. But what about all those other folks?

Well, I suggest you do the quest chain starting with A Strange Device and ending with Defending Wyrmrest Temple. If you’re still leveling and don’t want to go out of your way to do this, that’s no problem. Follow Jame’s Leveling Guide. It’s covered in there. Another useful quest chain is the one that starts with Too Close for Comfort for the Horde and Nick of Time for Alliance. These lead to Coldarra, where other Kirin Tor quests can be found, most notably the ones for the Nexus. (Side note: There’s even more quests, which are all listed at this link, but I feel that listing every single one will make for an unpleasant experience to the reader!)

Other methods of obtaining a reputation with those Kirin Tor folk include wearing their tabard while hacking and slashing your way through Northrend dungeons. This is certainly the most effective way to go about earning reputation, as the dailies that those Magi offer you are disappointing. You either do some cooking for Katherine or Awilo, or do a heroic dungeon. I do suggest doing that daily heroic while wearing a tabard, that way you can do a double-whammy, getting tabard rep and daily rep at the same time! Bwahahaha!

Well, naught to worry, young one. They plan to fully compensate your troubles by giving you the honor to purchase their wares! Mr. Alvareaux in Dalaran is the man to buy from; here’s a nice little list of his wares: