Welcome to my Wesfall Guide!

Since experience bonuses can vary greatly I’m just going to list the circuits without level assumptions. If I tell you to train when you have no skills to learn please disregard.

I like to train skills in Goldshire, because the trainers are much closer to the flightpath. If you like to check out the Auction House or just like running around through Stormwind please feel free to do so.

If you started with my Elwynn Forest Guide you should have these quests completed in your log:

You enter Westfall at the scene of the crime! 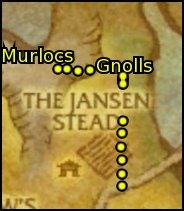 1. Talk to Lieutenant Horatio Lane and turn in Furlbrow’s Deed and Hero’s Call: Westfall. Get Murder Was The Case They Gave Me.

2. Talk to the Homeless Stormwind Citizens and West Plains Drifters in the field until you have obtained all 4 clues.

5. Go down the hill and kill Murlocs until one drops a Murloc Clue. If you happen to get a Captain Sander’s Map hold onto it for now. If not, don’t sweat it.

2. Get “I TAKE Candle!” from Jimb “Candles” McHannigan.

3. Get Feast or Famine from Mama Celeste.

4. Gather 5 Fresh Dirt and kill 8 coyotes to collect 8 Coyote Tails. Both can be found in the field here.

5. Go to the Jangolode Mine and kill 12 Kobold Diggers as you work your way to the back of it.

6. Use Two-shoed Lou’s Old House at the back of the mine, observe the conversation.

7. Hearthstone back to Goldshire.

10. Turn in Feast or Famine, “I TAKE Candle!” and Livin’ the Life. Get Lou’s Parting Thoughts.

11. Go behind the barn and eavesdrop on the Thugs back there. 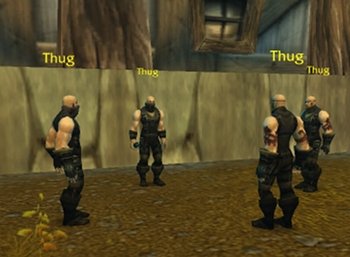 When they attack you, kill them. Head back to the front of the farm.

13. Get Shakedown at the Saldean’s then run to Saldean’s Farm. 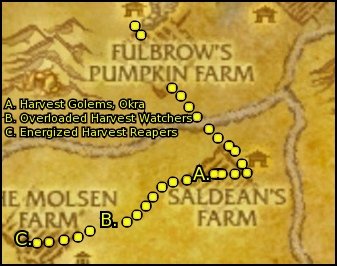 1. Turn in Shakedown at the Saldean’s at Farmer Saldean then get Times Are Tough.

2. Go in side and get Westfall Stew from Salma Saldean.

3. In the field loot 6 Okra while killing 10 Harvest Watchers. 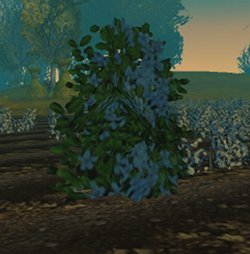 5. Go to Farmer Saldean, turn in Times Are Tough and Heart of the Watcher, get It’s Alive!.

7. Find a Overloaded Harvest Golem and use the Harvest Watcher Heart.

8. Use Reaping Blows (1) to get a bunch of Energized Harvest Reapers following you, then use Rocket Boost (2) to knock them down. Repeat until you’ve killed 25.

9. Return to Saldean’s Farm. A Rocket Boost will get you most of the way there.

11. Get You Have Our Thanks from Farmer Saldean and turn it in to Salma Saldean. Get Hope for the People. 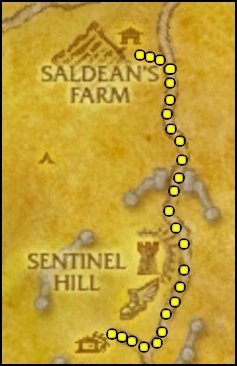 2. Turn in Hope for the People to NPCs, get Feeding the Hungry and the Hopeless.

3. Talk to Captain Danuvin, get The Westfall Brigade.

5. Kill 12 Gnolls. If none of them dropped Gnoll Attack Orders kill some more.

6. Time to go feed some homeless. There are higher concentrations of them at the main road, so you can complete the quest with fewer pots of Westfall Stew. 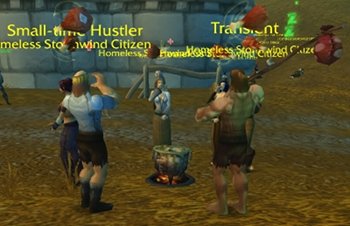 7. Go back and turn in Feeding the Hungry and the Hopeless, The Westfall Brigade and In Defense of Westfall.

8. If you need/want to train skills fly back to Goldshire, train, sell junk, repair, restock. 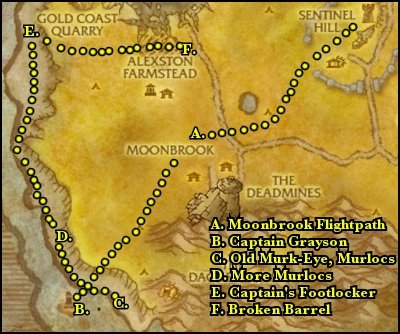 This circuit is optional. It’s 8 quests, approximately 16,300 experience, 5 area discoveries, and a goodly amount of running around. I’ve placed it at this point of the guide to allow optimal use of the Hearthstone so make sure you have it set to Sentinal Hill.
If you just want to continue with the storyline of the zone skip ahead to the next section.

1. Run to Moonbrook. Get Flightpath.

5. If you haven’t yet, kill Old Murk-Eye 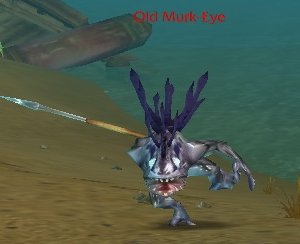 6. Head North to the Captain’s Footlocker killing Murlocs on the way.

8. Head Slightly North then East and go up the hill. If you run between Gold Coast Quarry and Alexston Farmstead you can discover both while pulling mobs from neither. 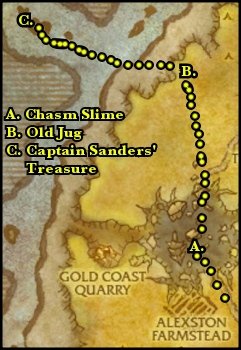 10. Head North into the Raging Chasm and kill Chasm Slime until you have 5 Chasm Ooze.

12. Swiim out to the island where you can turn in Captain Sanders’ Hidden Treasure.

We’ll turn in the 3 lighthouse quests in just a bit! 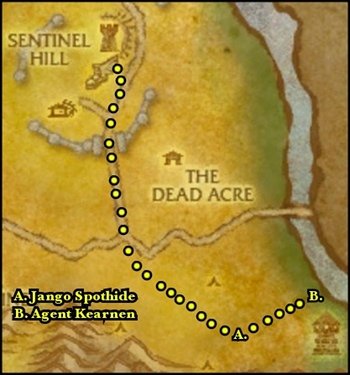 3. Head South to The Dust Plains.

4. Kill 5 Riverpaw Mystics, 5 Riverpaw Taskmasters and Jango Spothide. Jango’s in the ruins of a small building. 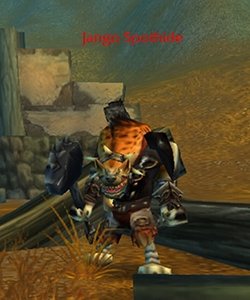 6. Agent Kearnen will headshot the elites at the tower as you engage them. Enter the tower, use the Potion of Shrouding.

7. Head to the top of the tower, listen to the conversation, head back to Agent Kearnen.

8. Turn in Secrets of the Tower, get Big Trouble in Moonbrook.

9. Run back to Sentinel Hill, make sure you cut through The Dead Acre if you want the discovery.

2, Turn in To Moonbrook to Captain Alpert, get Propaganda.

3. Go into the first building on the right (Schoolhouse?) Where you’ll find Mysterious Propaganda and an Information Pamphlet.

4. You’ll find an Issue of the Moonbrook TImes by the fountain.

5. A Red Bandana off of a Moonbrook Thug will start Evidence Collection.

6. The Secret Journal is upstairs in the Inn. Northern-most room.

7. There are more Thugs behind the Foundry, kill them until you get 6 Red Bandanas.

8. If you run up the hill a little bit you’ll discover The Dagger Hills.

9. If you did the optional circuit now is a good time to run back to Captain Grayson to turn in The Coast Isn’t Clear, Keeper of the Flame and Coastal Menace.

10. Return to Captain Alpert, turn in Evidence Collection and Propaganda, get The Dawning of a New Day.

11. Go to the rally in Moonbrook. Listen to the Shadowy Figure until The Dawning of a New Day is complete (The crowd will cheer.)

12. Turn in The Dawning of a New Day to Captain Alpert, get Secrets Revealed.

13.Turn in Secrets Revealed to Thoralius The Wise, get A Vision of the Past.

14. Run down through the Deadmines, follow the trail of homeless people, enter the instance, use the Incense Burner, enjoy the show.

15. Hearthstone back to Sentinel Hill.

1. Turn in A Vision of the Past to Marshal Gyran Stoutmantle, get Rise of the Brotherhood.

2. Watch the phased cutscene, When Stoutmantle tells you to go to Stormwind, fly to Stormwind.

3. Turn in Rise of the Brotherhood to King Varian Wrynn (he’s in Stormwind Keep), get Return to Sentinel Hill.

4. Fly back to Sentinel Hill. The King said to. Stop to train first if you need to.

5. Talk to NPCs, turn in Return to Sentinel Hill, get Threat to the Kingdom.

This concludes my Westfall Guide!

At this point you should have discovered all of Westfall, completed 43 quests and have these 2 left to turn in:

Head East to Redridge Mountain and my next Guide!