The point of this guide is to explain the best and fastest way to get honor from doing the battleground AV. In this guide I will explain ways for both low level players as well as higher level characters. This is an Alliance only guide, however, it can also be used as a Horde player but all the names are Alliance specific so if you are a Horde just try to convert the names to suit your needs. I got all my info from my main who is level 66 so I am a lower level but as you can see in my screenshots at the bottom i still get high amounts of AV, maybe you will be just as lucky :).

Curse Website – Download the Client which makes it easier to download addons.
Deadly Boss Mods – Just add some time bars that help during AV.
YouWereKilledBy – Funny to have, lets you know who to hate ;).
AutoProfit v4.5 – This isn’t related to PvP but it helps clear bag space.
DMiniCoords – A simple box which displays coordinates, left-click it to move it where you like.

Jame explains how to put addons on without the client:
In case you don’t know how to install add-ons, simply download an addon from one of the links above and unzip it. Then drag the unziped folder in your Addon folder (full path is c:\Program Files\World of Warcraft\Interface\Addons). Then, restart World of Warcraft and it should be working.

If it isn’t working, you might need to log out to your character selection screen and click on “Addons” in the lower-left corner. Tick the box that says “Load out of date Addons”. Re-launch WoW.

First check out this video on AV – AV Video – Not made by me!

Even Teams or More Team Members

Before I start I just want to mention that depending on what realm you are on different factions (horde/ Alliance) will win. If you are lower then half of your level range and are unsure whether you are good with your class I would suggest you stand back and watch and occasionally use you aoe spells and heals. The reason why we use our aoe spells is to raise your damage done which makes it look like your doing something. If you are healing (Priest, Druid, Shaman or Paladin) then use ctrl-v to see your team’s health bars. If you die, healers especially, you will aggro a lot of enemies and will probably will killed, DO NOT go to your corpse, unless your body is close enough to be resurrected by the npc and can resurrect by your body. The reason is because if your insignia is taken while running to your corpse you waste time getting back to the npc resurrect. It will also help (obviously) if you have extra health because the higher levels will try to kill you so try to get some help from some team mates. Finally if you ever see an enemy trying to retreat back to his team, stop him by any means necessary (i.e. stun, freeze, death grip-DK’s only)

If your team is overpowered (not 2 or 3 less players) and your team will get destroyed then sadly you will have to forget about honor for a bit and try focusing on training. The quickest way to do this is grind on the Harpies by the cave and work you way through the cave until you reach the Alterac Yeti, he is level y1 (elite). Once you make it to the Yeti you can try to kill it but you most likely will die, especially if you are a lower level. If you ever do die don’t worry because by this time the teams should have evened out so then just go and help your team. If it hasn’t evened out you will have to go back and continue to grind on the Harpies, another thing to do is you can complete some of the quests at the main camp. Do this until the teams even out, when that happens go help your team (see the above guide: Even or Overpowered). If the teams never even out , sadly, you’ll have to continue grinding on the Harpies or you can try your luck at battling the horde team, however, you may die… a lot :(.

Anyway, if you are level 8 or above you will probably be the main dps, so it is vital that you use an aoe spell (i.e. Paladins – Consecration, Mage – Blizzard, Hunters – Frost Trap + Volley, DK’s are a little harder to aoe but it is possible – Aoe With a Dk – Provided by Jame. Obviously, it helps to have a lot of health because you will aggro a lot of guys, also if possible use heals – Paladins should bubble heal, DK’s should use blood aura. As a main dps you will probably want to use a strong, fast weapon and close to the best gear you can have.

Even Teams or More Team Members

Basically , as a main dps you should stay with the main group and work your way through the bosses until you hit Drek’Thar, when you get to Drek NEVER retreat because then you reset his health and it will take way too long to kill him and a lot of unnecessary deaths will occur. All of the bosses are level y1 (boss) therefore they are impossible to solo, so never go in alone (especially for Drek) wait for your team to rally up then blitz, or attack all at once, the boss. If you ever aggro the boss never run out of the building because he will then reset his health and it will take way to long to kill him.
These are the two Horde bosses that should/need to be killed. 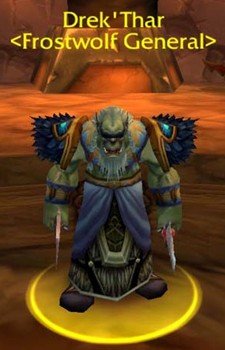 Drek’Thar – when you kill him you win AV! 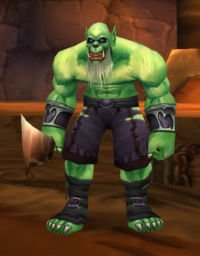 Galvangar – When you kill him the Horde reinforcements decrease by about 100 points!

Also remember to capture all of the graveyards on your way to the Horde Base because then when you or other people die then it is easier and faster to get back to your team, be sure to get the graveyard past Drek because then you spawn close and never really miss out on the kill, also as an added bonus the horde team cannot spawn there. Once you have killed Drek you win AV instantly. However if, for some reason, you can’t kill Drek (Not enough team members/work) then you can capture all of the bases and start killing the horde team for even more honor and wait for their reinforcements to diminish when that happens you win AV!

If you are ever overpowered by the other team then sadly you have no choice but to stand and fight. You could grind on Harpies but it may get a little boring and it is very easy. However, fortunately there is a technique that will allow you still get some honor but it is a little slower. When you see that the Horde is coming close, stand at the nearest graveyard (GY) and wait for the horde. When you are at the GY make sure that there is a group of Alliance players because if there isn’t then you will get destroyed very easily …this is bad :p. When the horde come, jump right in to the fight (p.s. watch for Dk`s because they will probably use Death Grip to pull you closer so be ready, don’t worry if you die because you will spawn right next to the fight (that is why we fight at the GY). When you are in the middle of a battle use a lot of your aoe spells, or traps ( – hunters only). Sadly the horde should eventually over power your team, however, one way to delay this is that whenever you see someone try to capture the GY flag, attack them by any means necessary because that will interrupt their capture. If they ever do capture the GY so it is contested try to capture t back because if you don’t you will most likely have to retreat to the next GY. If that ever happens, where the Horde control the GY, go back to the nearest GY which is usually the main camp. If it isn’t the main camp just continue to do the same thing as before until it is taken over, if it isn’t taken over then just continue to fight until the game ends. If it is at the main camp with Vanndar Stormpike (our boss) then get your team and run into the building with Stormpike and wait there because most likely the Horde will try to kill Stormpike so as soon as the Horde come in the building start to fight them so you protect Stormpike and delay their victory. If you have downloaded DBM then check it constantly to make sure that the Horde don’t take the GY because if they do then you spawn at the beginning and it takes to long to get back to Stormpike. During this BG you have a very low chance of winning so if you lose don’t worry it was expected.

During AV if you don’t want honor then there are many quests to do at the main camp.
1. Armour Scraps – this is given by Murgot Deepforge (43, 15) a very easy quest to do as well as giving good advantages. When you are in the fights collect the insignias of the fallen players to collect armour scraps, when you have enough, or you want to turn them in, go back to Murgot Deepforge and turn all of your armour scraps in. It is repeatable and a little honor. As well as npc upgrades per 25 turn ins, and 1 Stormpike rep is offered per turn in of 20.

2. Empty Stables – talk to Stormpike Stable Master (42, 16) and accept the quest and you will be given a collar. Once you have the collar get off the road and find any Alterac Ram and use your collar on it and you will begin to tame it. Once it is tamed mount up and go back to Stormpike Stable Master and turn in Empty Stables for some honor and rep (10 Ironforge, 1 Stormpike).

3. This quest is the second part of Empty Stables and you get Ram Riding Harnesses (42, 17) from Stormpike Ram Rider Commander and you need to farm Frostwolf hides, you need 25 for all of the rams.

Here are a few screenshots of my level 66 Paladin. These are not edited in any form except that I made them smaller to be viewed easier.

In this screenshot you can see that I have the lowest damage done and around near the middle for killing blows. This just proves how effective staying back and milking honor off other players is 😉

In this screenshot you see that I have captured one GY, this accumulated a little bit of honor (certainly better than no honor :)) also the secondary objective was a quest I got from “Prospector Stonehewer” (43, 14) called The Battle Of Alterac

Also please ask whenever you have a question about anything concerning this guide (i.e. spelling errors, unclear instructions).