This guide is a work in progress. Please leave comments for needed improvements, especially after Cataclysm goes live. Thank you!

I used Jame’s Guide Writing Guide, Wkjezz’s Making a uniform header for guides, Jiyambi’s Creating Maps and Graphics with GIMP and Brune’s Colour Guide, so thanks to them as well!

I also have to give a huge THANK YOU to kayeich for his editing prowess and the rockin’ maps! In the words of our fair Jiyambi ”That was simply epic of you to do!” 🙂

These guides are also available in addon form here! They are amazing!Try them out!

1. If you followed Troll Starting Zone (1-5), you should have the quest Sen’jin Village. Run and turn in the quest to Master Gadrin in Sen’jin Village (56.02,74.71). Accept the quest Breaking the Chain from him. 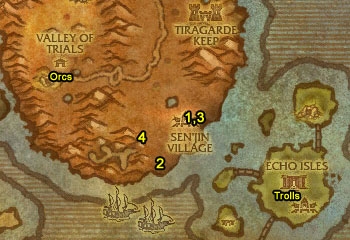 2. On your way Southwest, kill Surf Crawlers for handfuls of Crawler Mucus.

Around (51,81) you should see Northwatch Lugs carrying Northwatch Supply Crates. Destroy 3 of the Crates and kill 10 of the Lugs. If you still need Mucus, finish killing Surf Crawlers on your way back to the village.

3. Turn in your quests and accept the following:

You should be around level 6 by this point.

4. Head to the Southwest. While completing the following step, kill Northwatch troops and place the Poison Extraction Totem near Clattering Scorpids until you have 6 samples of venom.

When you have these three quests completed, head back to Sen’Jin Village and turn them in.

You should be around level 7 by this point.

Accept Riding On from Master Gadrin and train your new skills if necessary. 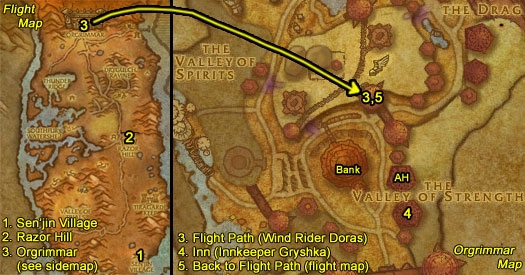 Repair and Restock if necessary.

Do any training, auctioning, etc. you need to do and head back up the lift.

4. Turn in Doras the Wind Rider Master and accept Return to Razor Hill. 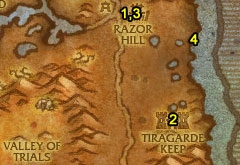 1. You should now be back in Razor Hill.

Lieutenant Palliter who is on the top floor of the big building in Tiragarde Keep. (59.5,58.2)

3. Run back to Razor Hill and turn in your quests. Accept the following:

You should be around level 8 by this point.

When you come across an Injured Razor Hill Grunt, talk to them and accept the quest Loss Reduction. 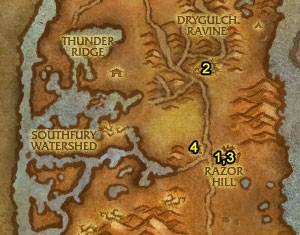 1. When you finish these quests, turn them in back at Razor Hill. Accept the following:

2. Exit Razor Hill from the east, and follow the canyon’s eastern ridge to Dustwind Cave (51.85,26.27). Kill members of the Burning Blade until you have 6 Burning Blade Spellscrolls.

4. Head to the top of the Guard Tower Northwest of town (49.58,40.16) and turn in Thonk to, well, Thonk. Accept Lost in the Floods from him. Use Thonk’s Spyglass four times to search for survivors. Then turn it in to Thonk.

OPTIONAL CIRCUIT
*The next circuit requires a lot of running (time), but some cool storyline and good rewards, including an eight slot bag. I don’t recommend it, but skip it if you wish and jump ahead to accepting The Dranosh’ar Blockade

You should be around level 9 by this point. 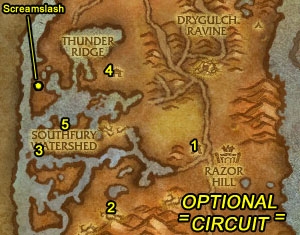 1. Accept Watershed Patrol from Thonk and head out to help the flood victims.

3. Our next charity case is Zen’Taji (35.87,41.37). Accept Unbidden Visitors and then attack a Wayward Plainstrider until it flees toward the Barrens. Do this twice more then turn it in.

Kill crocolisks/toothgnashers until you obtain 250 Crocolisk Teeth. Then return to Misha and Turn in.

You should be around level 10 by this point.

Hearth back to Razor Hill, or just run East back to the Guard Tower. Turn in Watershed Patrol to Thonk. 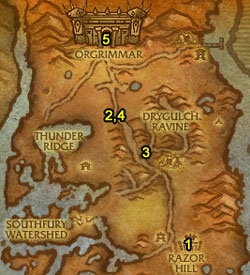 1. *Accept |The Dranosh’ar Blockade from Orgnil Soulscar and head North out of Town toward Orgrimmar.

3. Head South and East to Razorwind Canyon (54.00,27.37). Kill 12 Durotar Harpies of any kind and Collect five Sacks of Supplies from the ground.

4. Return to Rezlak and turn in your two quests.

5. Continue North to Orgrimmar and set your Hearthstone there. (I chose Miwana in the Valley of Wisdom (39.03,48.57). Feel free to choose another Inn if it’s more convenient for you.) 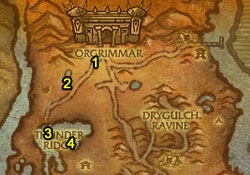 Speak to Shin, and ask him to tell his story. When “wolfed”, run East and a bit South until you find fighting kodos. (55.24,13.99) Wait for story to finish, then turn in back at Shin Stonepillar.

Now you can accept Ignoring the Warnings from Gor the Enforcer.

2. Head West and kill 12 Warring Elementals. You may slay either Furious Earthguards or Teeming Waterguards. (37.39,19.46)

3. Now South and East to Thunder Ridge. (40.71,30.06) Take a dive into the lake and find a Thunder Lizard on the bottom. Activate eight of them while avoiding their shock waves.

You should be around level 11 by this point. 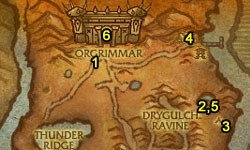 1. Now either Hearth or run back to Gor the Enforcer outside of Orgrimmar (44.98,14.76) to turn in your quests. Accept Margoz. Also accept Beyond Durotar if you plan on going to Azshara as your next zone instead of Northern Barrens.

Speak to each of the NPC’s and challenge them to combat. After defeating all three, turn in quests to Spiketooth.

You should be around level 12 by this point. 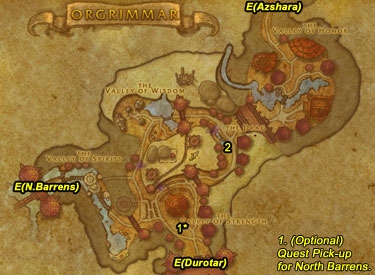 1. If you plan on going to the Northern Barrens next, accept Ak’Zeloth from him, and accept Warchief’s Command: Northern Barrens! from the sign in the Valley of Strength. (49.7,76.6)

2. If you are headed to Azshara, exit through Orgrimmar’s rear gate and turn in Beyond Durotar to Ag’tor Bloodfist. (26.84,77.00 in Azshara)